Driving passed the “welcome to Kalgoorlie-Boulder” sign, the red ochre soils of the surrounding outback landscape give way to a wide main street that is home to some grand historic buildings and pubs, most of which date back to the gold rush era. I pull into the iconic Exchange Hotel and the cold beer arrives swiftly along with a welcoming smile and a bit of chat. For my short stay in Kalgoorlie, I was to find this kind of welcome is the norm everywhere from the pubs, to the golf course to the service station on the edge of town.

It is this kind of embracing hospitality that has made Kalgoorlie, and the WA PGA Championship, one of the most popular events staged by the PGA Tour of Australasia. As a result, the course will host the event for the 10th time from November 25 to 28.

This is amazing when you consider the course was only officially opened for play in November 2010. 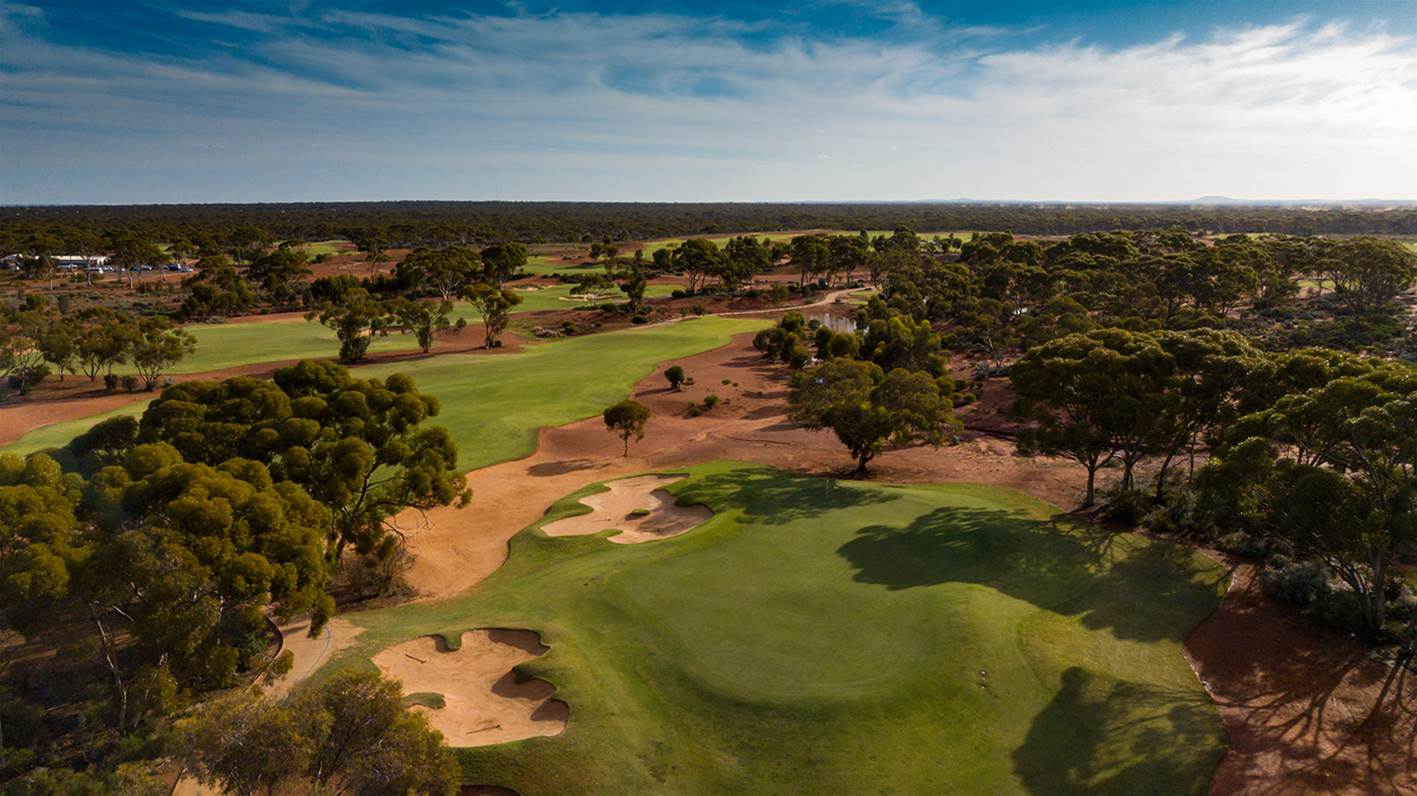 Lying at the heart of Western Australia’s Goldfields region, a bit more than six hours’ drive east of Perth, Kalgoorlie is a twin city with Boulder and both towns warmly embrace their gold mining heritage. Gold was first discovered in the area in 1893 and gold mining remains the major industry of Kalgoorlie, employing about a quarter of the local workforce. In fact, the concentrated area of large gold mines surrounding the original find is often referred to as the Golden Mile.

The twin cities boast a wide range of historic, scenic and natural attractions but the local council had set its sights on golf to add further depth to the region’s appeal.

A proposal to develop a world-class golf course in Kalgoorlie first emerged in 2002 and, three years later, a developer was appointed to turn the vision into reality. The plan included the merger of the three golf clubs in the area – the Kalgoorlie, Boulder and Hannans Golf Clubs – to form the Goldfields Golf Club at a new Kalgoorlie Golf Course. 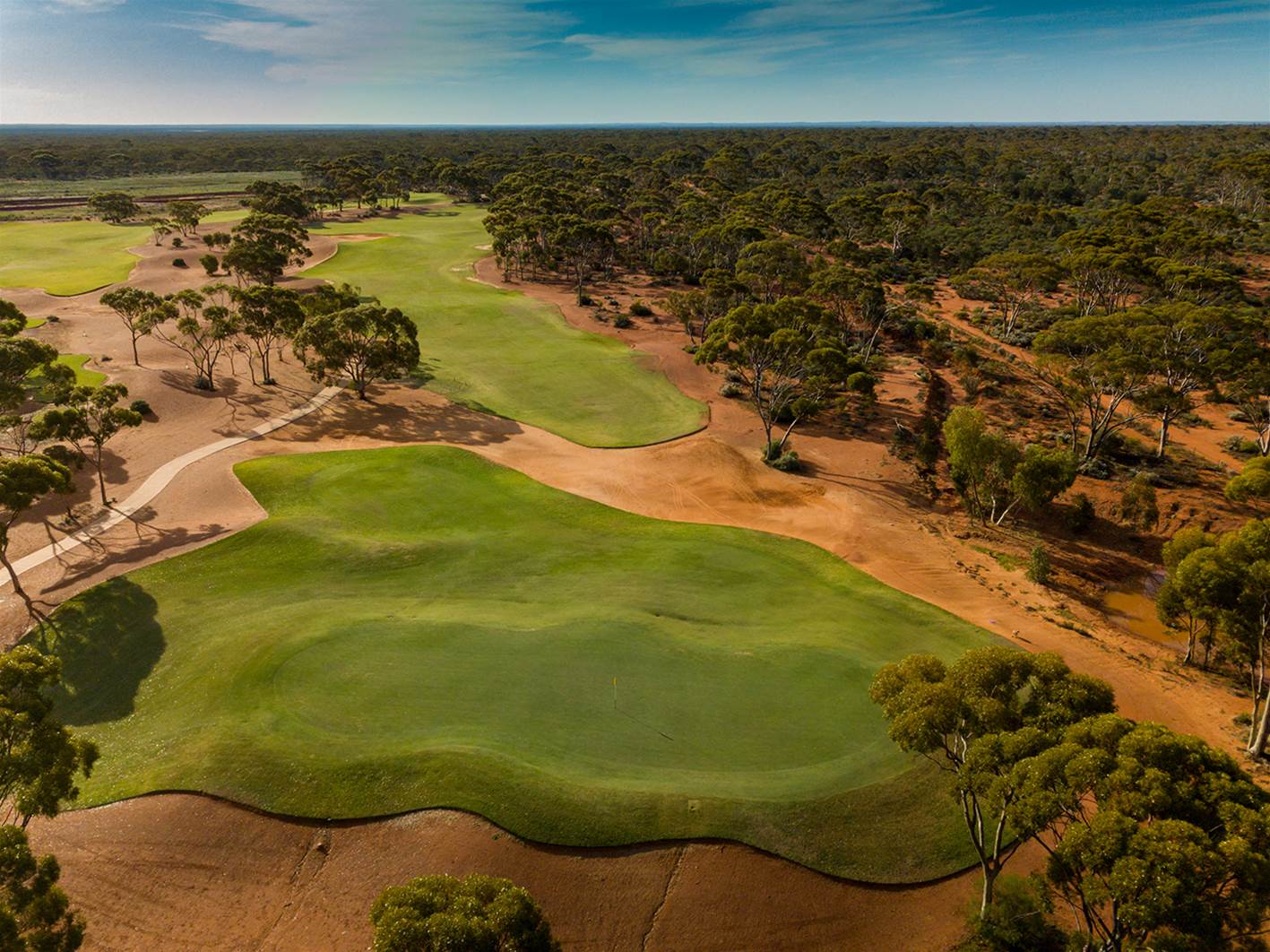 Good club selection is needed on the par-5 2nd to avoid a third shot from the red sand. PHOTO: Brendan James.

For Marsh, it was a project close to his heart having been born in Kalgoorlie in 1944, some 45 years after the original Kalgoorlie Golf Club was formed and their course laid down – within the confines of the town’s racecourse – making it the second oldest golf club in Western Australia.

While he might have been born in the desert, Marsh wasn’t bred there. His parents left Kalgoorlie a few weeks after he was born. He had ventured back there several times before his design company was commissioned to create the course at the heart of an ambitious project, that would ultimately include a five-star hotel.

When he first walked the site, one could have forgiven Marsh for turning has back on the job as a relatively featureless landscape, that had been used as a garbage dump. 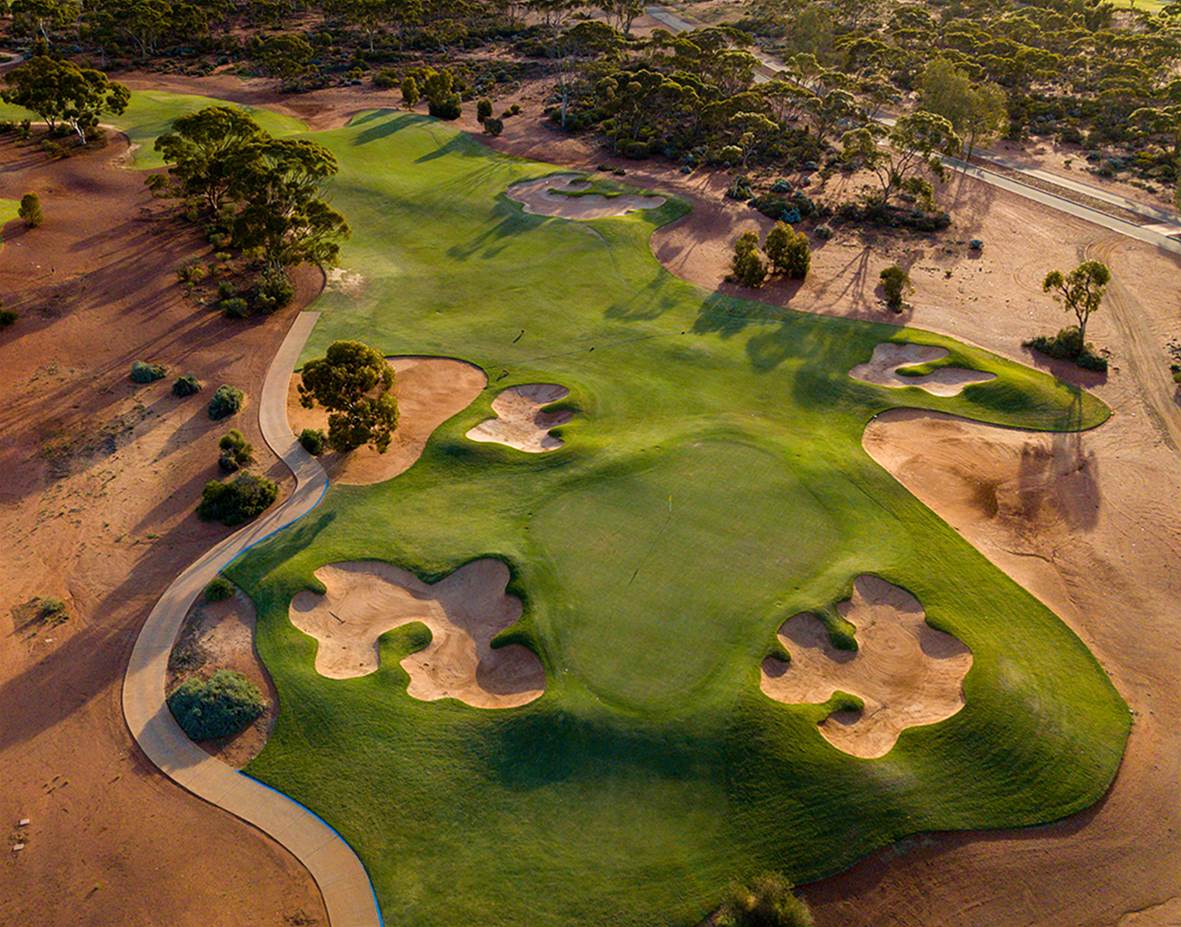 But he saw the beauty in the site. The majority of the property was flat with vast expanses of red, desert soil dotted with the pink trunks of native salmon gums and plenty of saltbush and various desert flowers. He would later describe the former garbage dump site as “rugged but enchantingly beautiful.”

When the private developer ran out of funds during the early course construction, Marsh could have walked away. But he stuck with it as the West Australian Government and the council went into partnership to finance the completion of the project at a cost of $18.5 million.

Within 12 months of opening Marsh’s desert creation cruised into the Top-100 Public Access Courses in Australia, as ranked by this magazine. In 2012, it cracked a debut position on Golf Australia magazine’s Top-100 Courses ranking for the first time and has been embedded in the list ever since.

In her appraisal of the layout, Golf Australia ranking judge Nikki Scott commented: “What a wonderful landscape for a golf course. The place bursts with desert colour, especially on dusk, and reminds me of a Russell Drysdale painting.”

It is easy to be enamoured by the Australian outback colours that presents with each hole bounded by red ochre sand and dirt, which have deliberately been left as naturally unkempt as possible. The same rugged beauty Marsh identified in his initial visits remains, now with superbly manicured playing surfaces weaved in between. It is visually stunning.

The condition of the Wintergreen couch fairways and the G2 bentgrass greens have impressed from day one, with the fairways maturing beautifully over the past 11 years. The high standard of presentation might surprise, given the desert location, where you might expect water and heat to be issues. But the layout has good access to water and the greens staff, led by course superintendent, Patrick Casey, present the course firm and fast, fully complementing Marsh’s design. 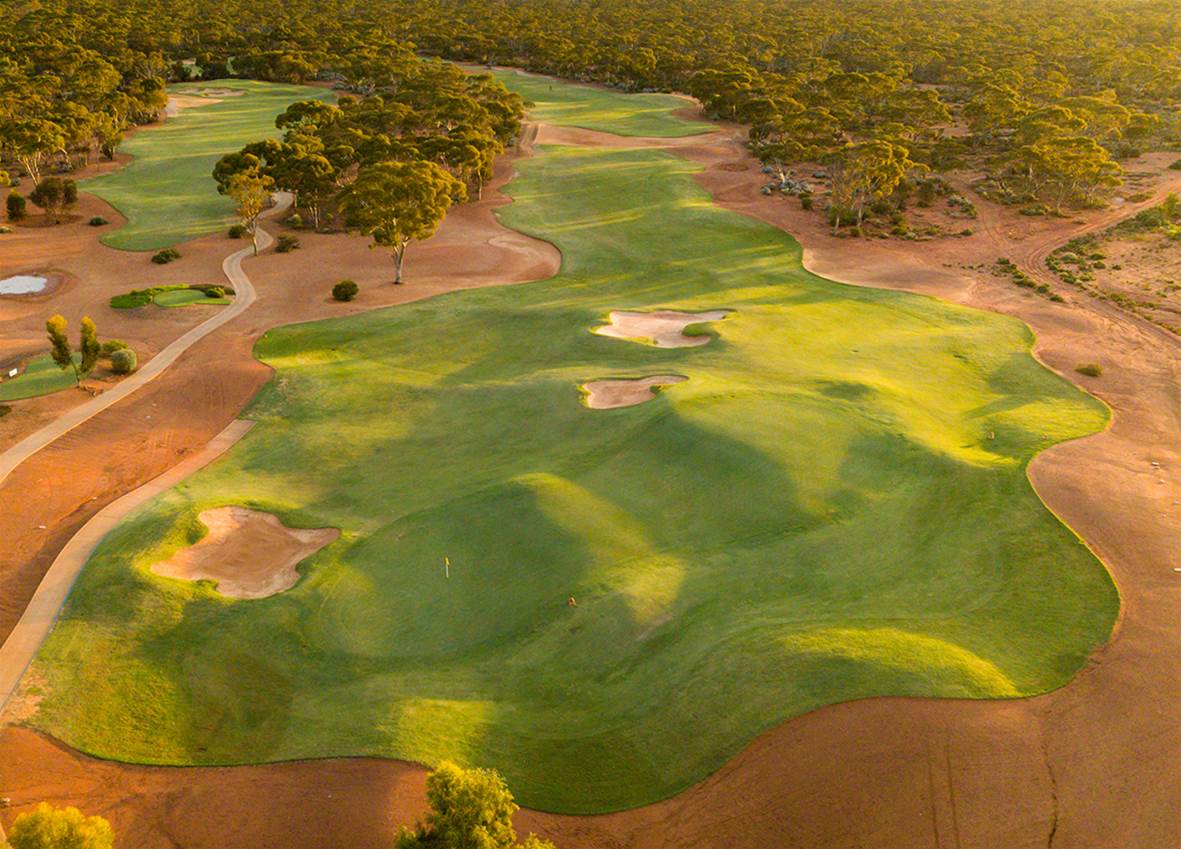 The dramatic green on the par-5 18th hole will be the scene of drama and triumph at the WA PGA. PHOTO: Brendan James.

While the condition of the layout surprised at first, the quality and creativity of Marsh’s design didn’t. This is a true desert-style course where the manicured surfaces are bordered by one cut of semi-rough and then the next step is onto the ochre-coloured loam beneath the desert scrub and clumps of wattle and gum trees. On several holes, Marsh has even used these rough edges to isolate tees or cut through a fairway to make longer hitters think hard about hitting a driver from the tee.

Striking bunkering has long been a feature of Marsh designs and it is no different at Kalgoorlie. He has combined deep greenside traps with strategically placed expansive bunker schemes, while also incorporating areas of sandy wasteland that seem to extend into the playing lines from the surrounding rough.

Marsh designed Kalgoorlie to be played by golfers of all standards. The course stretches to a lengthy 6,768 metres from the championship markers making it the longest course in Australia, which is not entirely surprising given the fairways will generally play hard and fast. 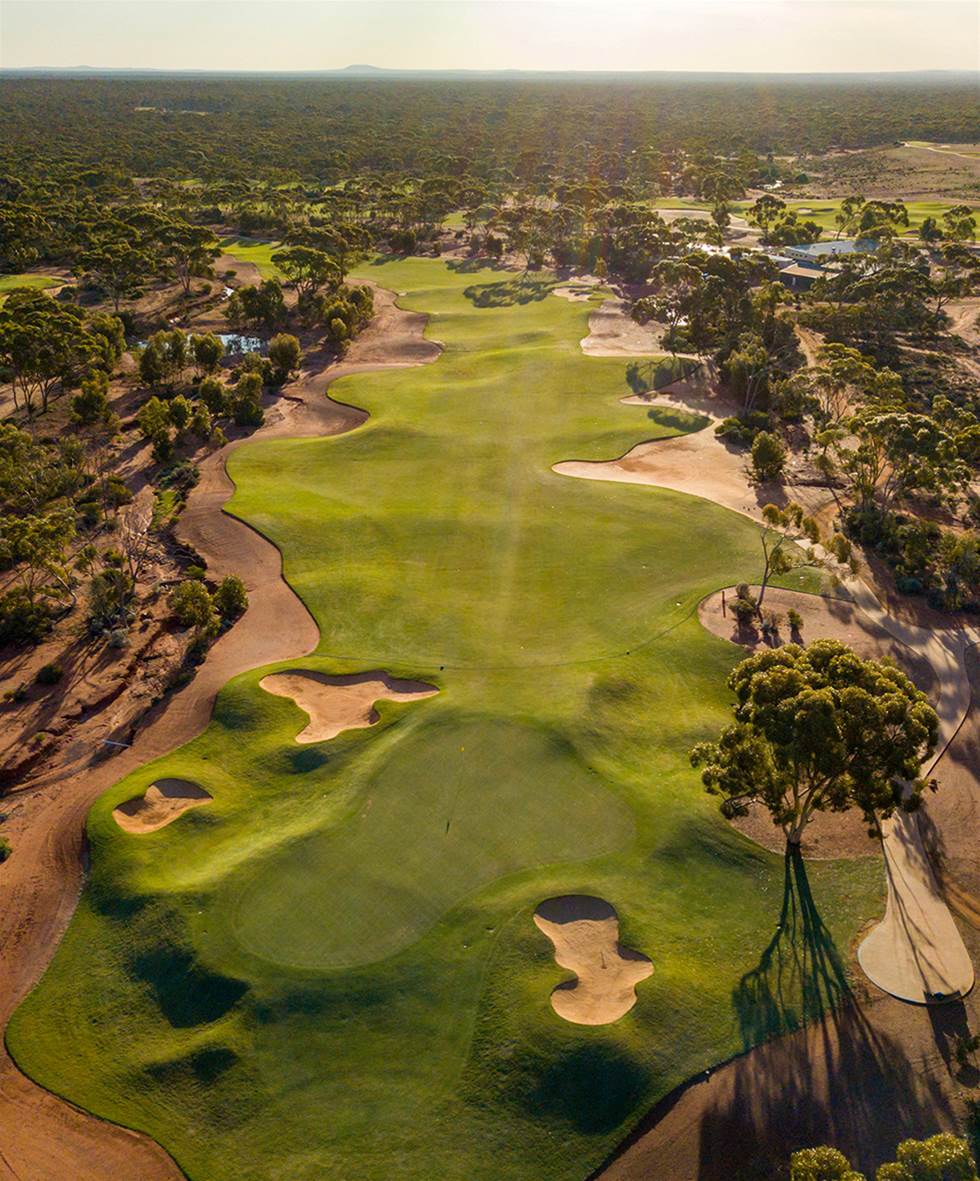 There are, however, four sets of tees on each hole, and the public layout is a testing but enjoyable 5,933 metres. While Kalgoorlie is a long course, Marsh’s design is very much about strategy and approaching the big greens from the right place in the fairway to leave the most makeable putts on the often-dramatic putting surfaces.

RIGHT: At 500 metres, the 11th hole is the shortest of Kalgoorlie’s collection of par-5s. PHOTO: Brendan James.

The front nine is fantastic and, for mine, offers the greatest variety of holes. In fact, it provides a mix of tree-lined holes as well as more sparse links-style holes that close out the nine.

Despite the length of the layout, Marsh has managed to include a very good short par-4 in his creation with the dogleg left 3rd hole. It measures between 280 (white tee) and 321 metres (championship tee) making it easily reachable in two hits for most players. But only a few will conquer this diminutive hole with a birdie three, as the green is one of the smallest on the course and is guarded by bunkers and a wasteland and/or water hazard (depending on rainfall) just short of the green surface.

Kalgoorlie’s most memorable par-3 is the long par-3 8th, which is played across a ridge on the highest point of the course. The four teeing grounds (stretched between 118 and 202 metres) are cut into the side of the hill and demand a tee shot to be played across a small gully to the green, which is perched on the edge of the ridge. Ringed by bunkers and wasteland, the wide green is receptive but only to a well-struck shot with the correctly selected club.

Marsh’s bunkering is often used to visually intimidate, rather than penalise, players by forcing them into second-guessing their choice of club and/or shot.

A fine example of this can be found at the long par-3 17th hole where the expansive bunkering short right and to the left of the putting surface have the effect of making the tee shot look even longer than it is. From the championship pegs, it is a punishing 218 metres to find the centre of the massive putting surface. One club short or long of the correct one can easily yield a dropped shot here.

The same can be said on the 18th hole, where the wrong club for the final approach into the green can be very costly. Marsh has never been afraid to be imaginative with his green complexes and he has certainly let the creative juices flow on Kalgoorlie’s par-5 closing hole.

This is a genuine three-shotter of 538-metres from the back markers and features a fairway that doglegs slightly right. Long hitters can be hamstrung here as the fairway is cut in two by a wasteland area at about the 280-metre mark. The wide fairway then gradually climbs to the front of the green, which lies diagonally to the angle of your approach and is cut into the side of a small hill. Two steep tiers cut through the putting surface that cascades down the hill leaving the front of the green much higher than the rear. It is a green that provides a memorable conclusion, good and bad, to a round and will have you – along with the hospitable welcome – wanting to play this course more than once.

HOW TO GET THERE: From Perth, Kalgoorlie is six and a half hours’ drive east. There are flights daily between Perth and Kalgoorlie. 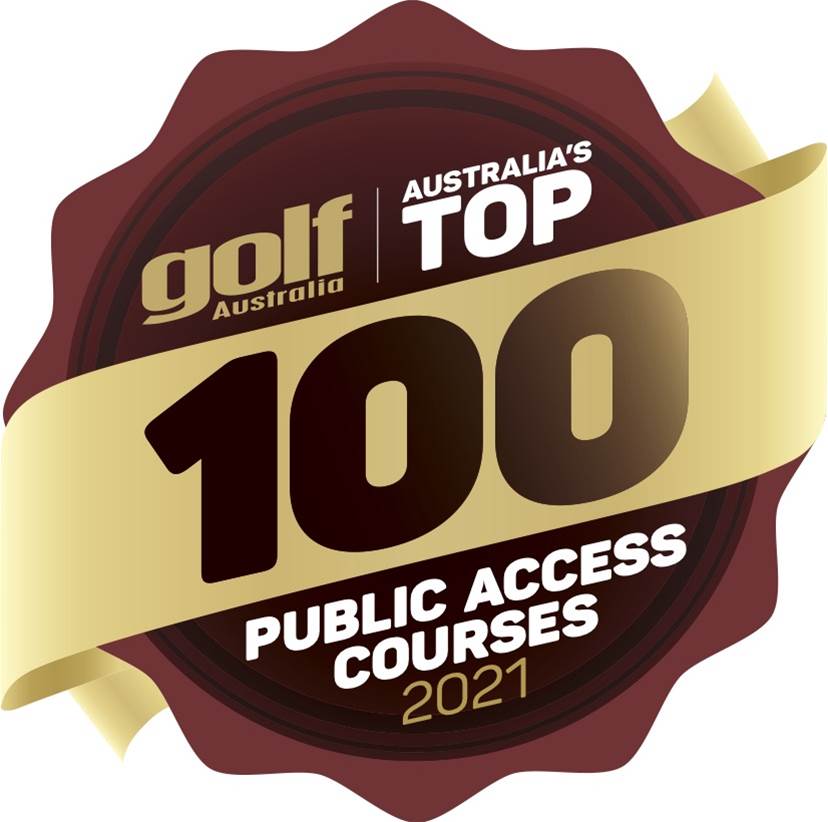