The evidence is right there in front of you before you have even struck a ball from the 1st tee. You need only stand on the clubhouse verandah and peer out across the Flooded Gum tree-lined 1st, 18th and 8th holes – with their near flawless playing surfaces and picturesque water hazards – to be convinced.

It hasn’t always been such a strong case to argue.

“There was nothing really striking about the property at all,” recalls Ted Stirling, who was commissioned to design Bonville in 1989. “There were, however, lots of big, beautiful trees because it was a re-forested property that had once been owned by Australian Paper Mills. 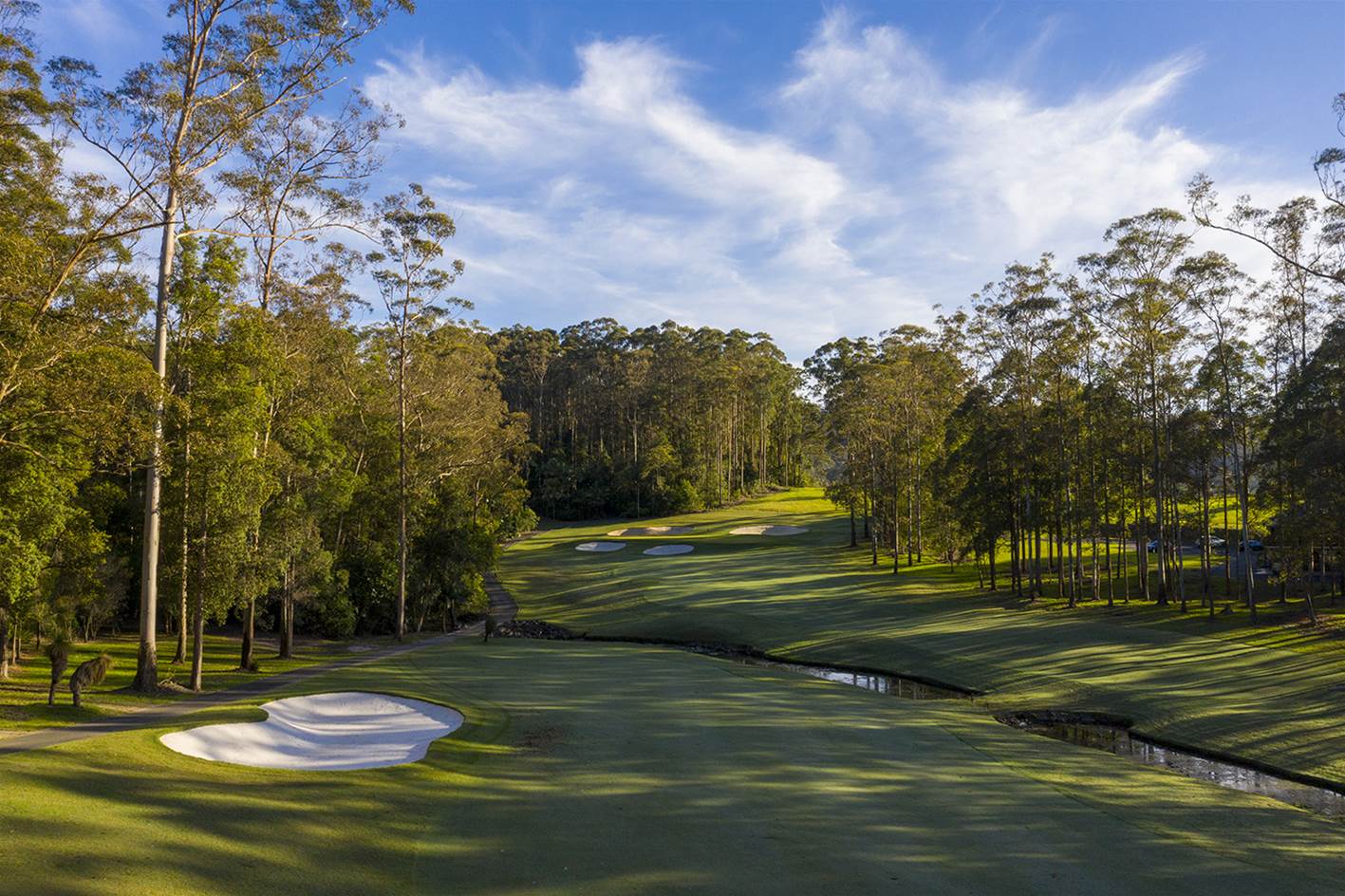 Stirling, and course superintendent/builder Terry Watson, were brought into the project by Coffs Harbour businessman Bob Johnson, who had just sold the biggest tourist attraction in the holiday town – the iconic Big Banana – to Japanese investors.

“And that’s how Bonville got started … the sale of the Big Banana,” Stirling laughed.

“He (Johnson) wanted to build a world class golf course on this re-forested land, at Bonville, which was owned by his mother.”

"We just felt if we could leave a lot of the trees and move the holes around them it would look great. And it did ... and it still does today." – Bonville course designer, Ted Stirling.

At Stirling’s disposal was about 250 hectares of dramatic undulating land covered by Flooded Gum, Blackbutt forest and small pockets of sub-tropical rainforest.

“We had to work out the best place for the clubhouse before we could set out the routing,” Stirling said. “The current site wasn’t the first choice. Land behind what is now the the tee of the par-5 7th was preferred at the time. But the current clubhouse site was eventually chosen because of easy access to the nearby Pacific Highway.”

With the clubhouse site chosen, Stirling set about working out the difficult routing within the property’s boundary confines, as well as avoiding an easement and two private rounds dissecting the property. 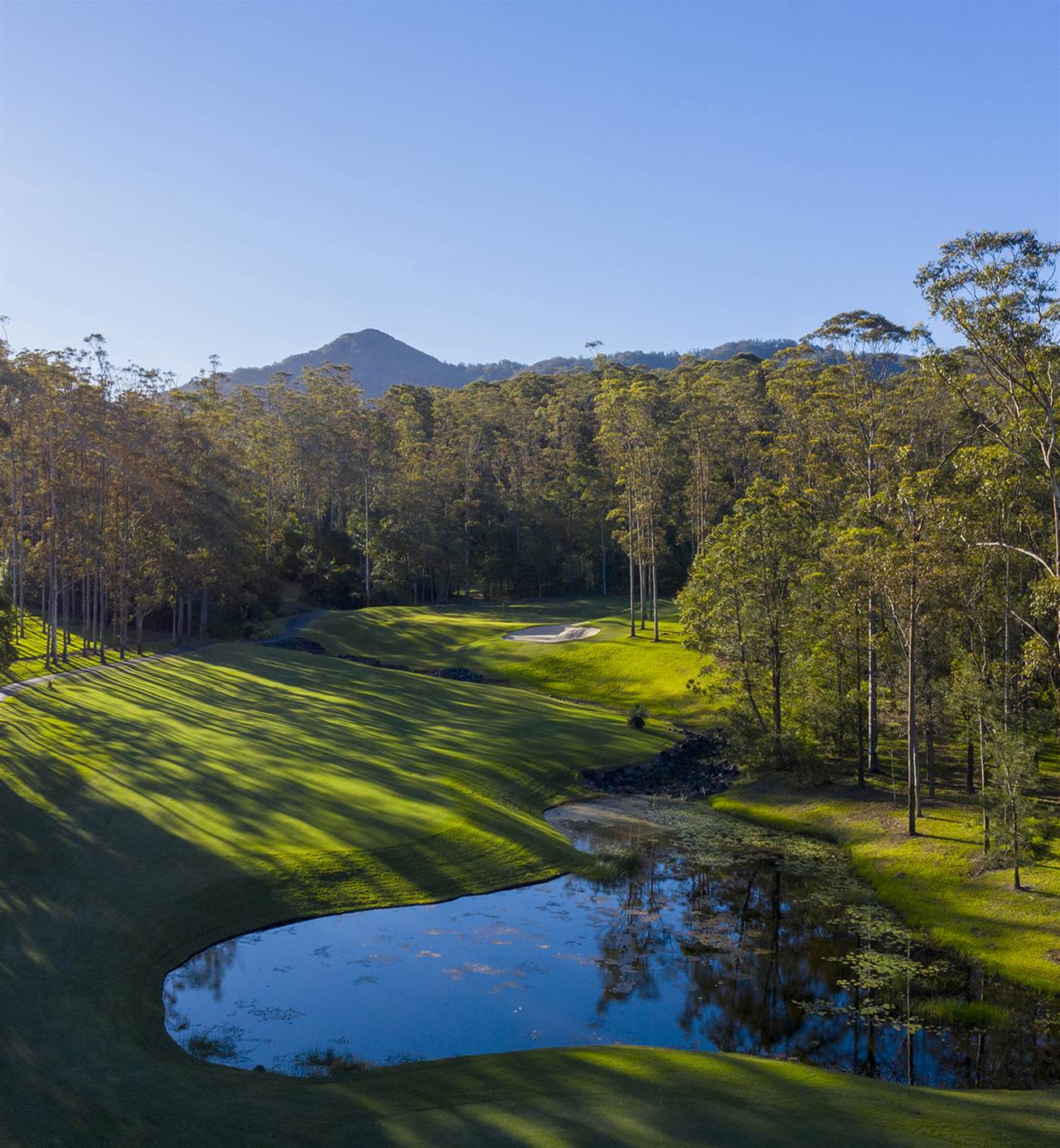 Armed with aerial photographs, contour and boundary maps, Stirling and Watson walked the densely-treed site half a dozen times looking where they could and couldn’t build golf holes. All the while, Stirling added to his mud map, but some of the course’s more detailed terrain would not reveal itself until the proposed holes were cleared of trees and thick undergrowth.

RIGHT: The final approach into the green on the par-5 10th hole is full of pitfalls. PHOTO: Brendan James.

“When we walked the site you had all these great big beautiful trees that were going to frame the holes. But the big plus for the site was the huge movement of the landscape, which allowed the water to move in certain directions. If the site was flat, and with Bonville’s annual rainfall, you could never have built a course there,” Stirling said.

“And the trees were just magnificent. People have said, it’s ‘the Augusta of Australia’, well we never thought of it that way. We just felt if we could leave a lot of the trees and move the holes around them it would look great. And it did and it still does today.

“I was used to walking through bush and discovering golf holes. It’s an artistic endeavour. There’s no rules and regulations.

“One of the unusual things I’ve had in my life is my ability to see the finished product at the start of the process. Most designers work the other way and have an end result in mind before they start. 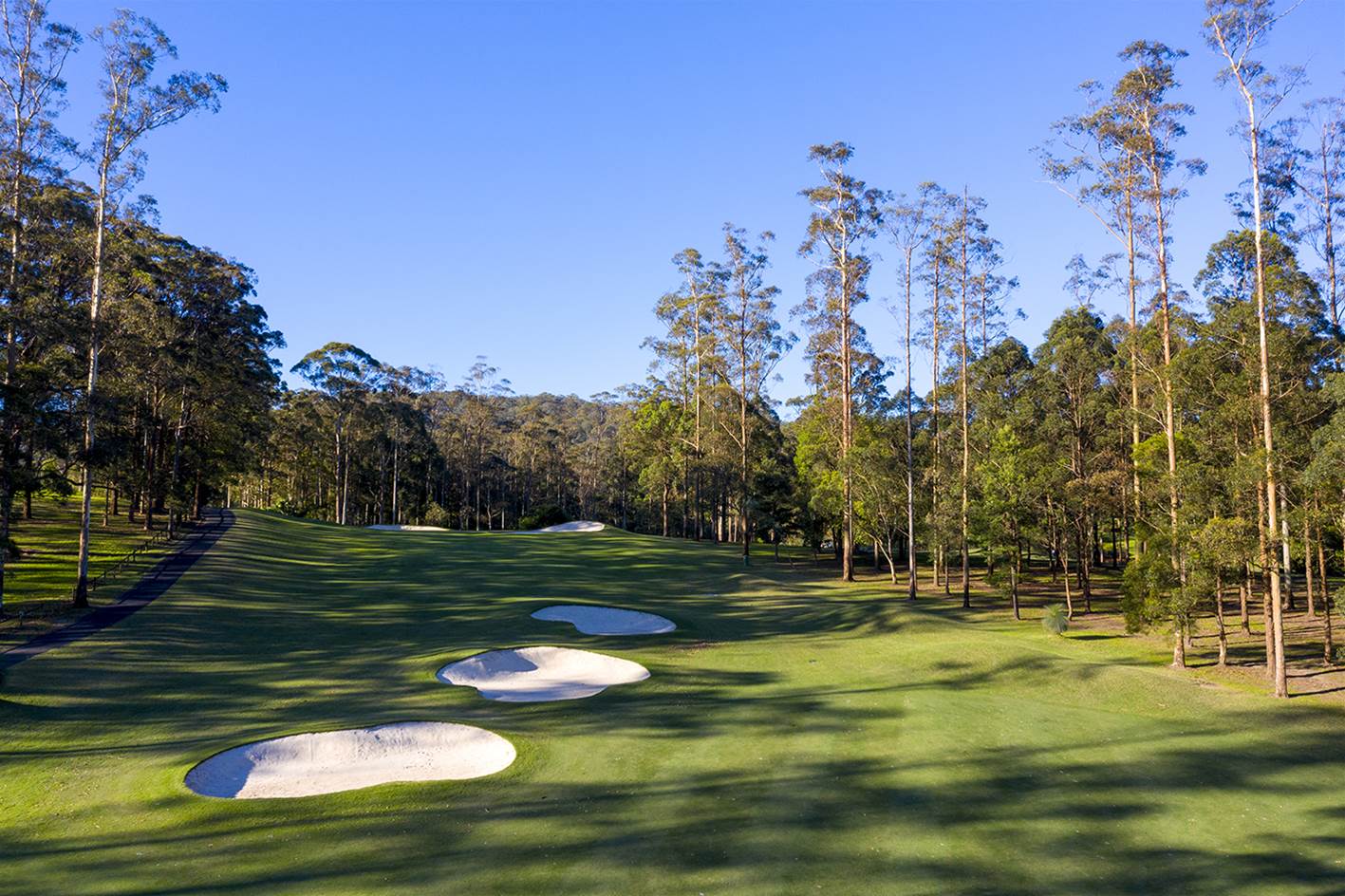 Staggered bunkers on the par-4 9th hole can tempt you into being too greedy from the tee. PHOTO: Brendan James.

“When you walk a course and you have a contour plan, it’s not until you do some initial clearing that you get a real concept of the detail on the ground and this was how we discovered most of the holes at Bonville.”

By the time Stirling and Watson had finished building Bonville, new owners were in place and the first official tee shot was struck on January 3, 1992.

Stirling’s design immediately impressed every golfer who visited. But in the seven years that followed, Bonville’s inconsistent conditioning let it down. The course was a victim of its own beautiful setting, with the tall trees isolating each fairway casting shadows over many of the greens for long periods each day. This lack of sunlight led to poor growth and stress on the original Penncross bentgrass greens.

But a change of ownership in 1999 saw the implementation of a lengthy ‘to-do’ list that has seen year-on-year improvement of the layout for the past two decades. Today, it is entrenched among Australia’s best in national ranking lists.

When current owner and chairman Peter Montgomery took over Bonville, a decision was made to raise the bar on the course’s presentation. It was a defining moment for the course, which is now widely regarded as one of the best conditioned in the country.

All the greens were soon converted to the more resilient Bermuda 328 grass, while trees shadowing some greens were removed or heavily pruned. The putting surfaces soon began to thrive and today they are some of the finest Bermuda surfaces in Australia.

In 2009, a bunker rebuild program was implemented. Each bunker was remodelled with better drainage and bunker mat material installed. Bunker mat is a three-dimensional sand retention and drainage matting, which is laid on the steep slope of bunker faces. The sand is trapped within the open structure of the fibres, allowing the sand to be held in place. Even in heavy downpours, the matting allows water to flow internally to the drainage in the base of the bunker without taking sand with it.

High-quality white bunker sand was then imported from Queensland’s Sunshine Coast to finish off the hazards and the result – visually, and in terms of playability – has been first class. Bonville plans to undertake a similar program again in 2022. 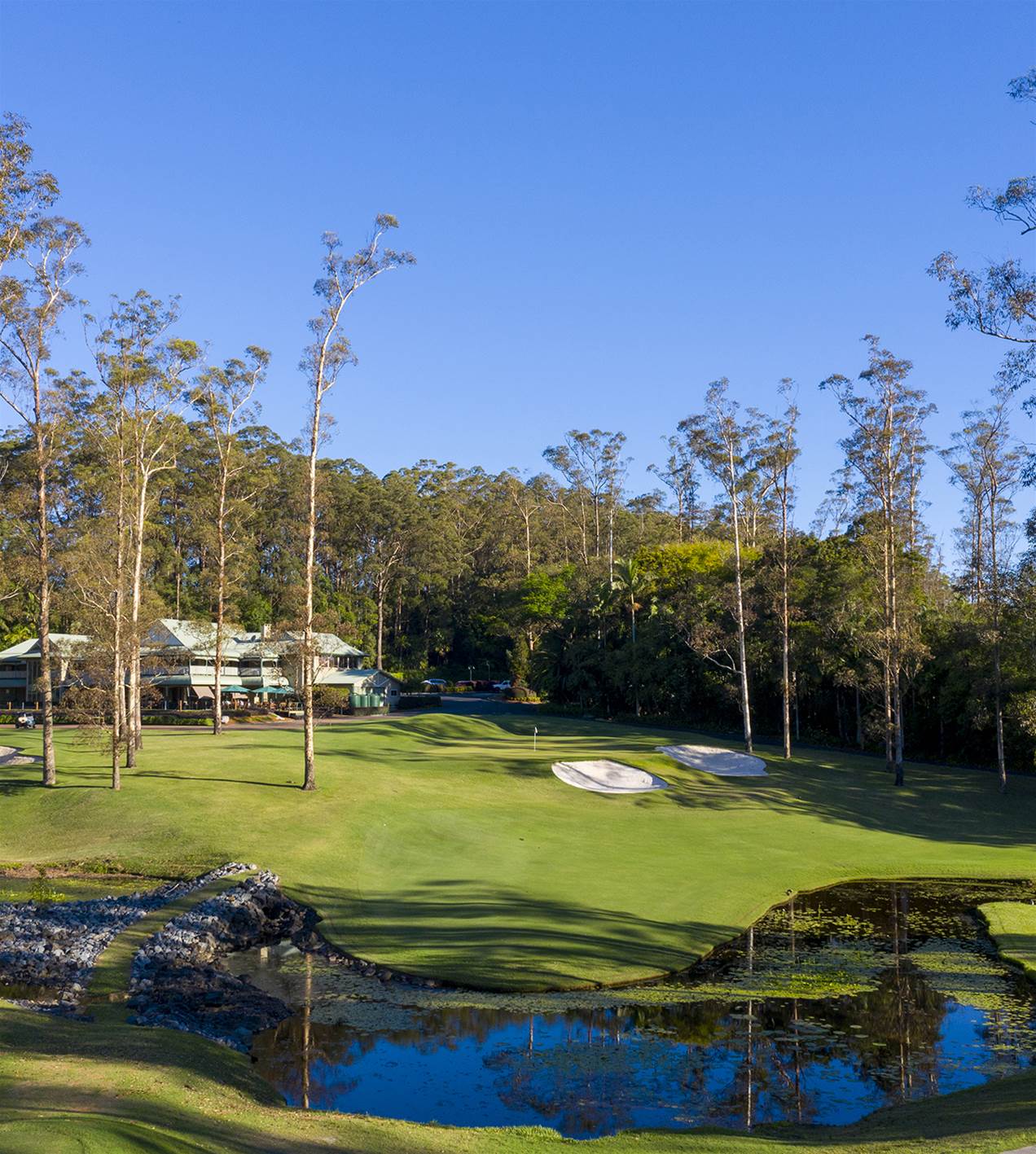 One of the memorable aspects of a round at Bonville is the strategic quality of its par-5s. Each requires attention to detail and, just like Augusta, putting your shots in the right position from the tee and in lay-up areas will reap benefits.

RIGHT: The uphill par-3 8th hole is an exercise in good club selection on the tee. PHOTO: Brendan James.

The 485-metre 4th is a great driving hole with a saddle-shaped fairway funnelling even slightly off-line shots back to the centre of the mown portion. The aggressive player may consider going for the green in two shots here but it is a shot that must be solid and shaped slightly right-to-left around the dogleg and the wall of Flooded Gums flanking the fairway. Longer hitters may also need to lay-up from the tee to avoid a deep gully that cuts the fairway in two. Two fairway traps and a huge swale, both about 60 metres short of the green, are in play and can complicate the errant second shot lay-up.

There is no better example of risk-and-reward par-5 strategy design than that found on Bonville’s closing hole. The 460-metre journey is over the crest of a hill between deep rows of towering Flooded Gums that line the way to the green, which sits just beyond a pond and stream. Standing on the crest, or clubhouse side of the hill, looking down toward the angled green beyond a snaking water hazard you are confronted by a few questions. For many players, there is never any question whether to go for the green in two shots or not. In such a wonderful theatre that the 18th provides it is hard not to add to the drama by throwing off the shackles and risking a dropped shot or two by playing aggressively … downhill lie or not.

All of which would please Stirling, who regards Bonville as his finest design work.

“Bonville has developed far beyond my expectations. The condition of the course is 1000 percent better than when we built it,” Stirling says. “I talk to people who visit Bonville, stay a few days and play golf, and they think it’s just fantastic.

GREEN FEES: Tee times for social play available Monday and Tuesday only – $160 pp (September to May); $150 (June to August). Members and in house guest tee times are seven days.

MEMBERSHIPS: Single, couple, intermediate, colt, junior and sub-junior membershipsare available. Applications are available via the website or you can email info@bonvillegolf.com.au