Ever wondered what it is like to run one of the biggest golf companies in the world? Or how Tiger Woods’ contract works? Or even, where a golf CEO sits in the distance debate?

Changing tacts … one of the more noticeable changes to the company from the outside looking in, is the Tour staff. What was once one of the biggest, to now where there is less than 10 official staff players. Is there a driving force in that move or has the industry and Tour sponsorships changed?

Any company that wants to continue to move forward has to assess and deliberately review their strategies annually if not more regularly. And really validate that strategy that has been developed the prior year, generation or ten years ago, whatever that time frame is.

Is it still relevant to today’s market?

And that is precisely what we have done at TaylorMade and as it relates to sports marketing. We used to deploy a strategy that was have more TaylorMade products in the bag of more Tour players and tell the message that TaylorMade has more players than anybody else.

Quite candidly, for many years that strategy served us well, because there was a high degree of visibility in and around the Tour with those playing TaylorMade. Don’t get me wrong, that is still critically important to us, because we believe not only on the PGA Tour but the worldwide Tours, we are in a very aspirational industry where golfers want to be sure that whatever they buy is also validated by the world’s best players, and if the world’s best players believe that the products they are playing are going to help them win or excel in their profession, then subsequently, golfers will believe that it will help them play better.

Those two things are intrinsically linked. A few years ago, we took a hard look at our Tour staff, and yes we had many players, and even to this day, we have a lot of players around the world, with contracted athletes in every major market around the world. But really our marketing messaging has pivoted and we talk with greater length and intensity around a smaller group of players, that really help carry our message in modern day media in a way that we couldn’t do historically.

For example, when I think about whether it is Tiger Woods or Rory McIlroy or Dustin Johnson or our hometown hero in Australia Jason Day or Jon Rahm and a series of athletes that we are going to continue to work with, these athletes that I have just mentioned, they have audiences that in their own way, range up to 20 million golfers that follow the things that they say and do, and want to use the products that they play. So, we have always worked very closely with the world’s best, we believe that they can help us promote our products.

"The best players in the world have to choose the best performing products to ultimately help them achieve their objectives. And so, whether they are contracted or not, the message is more players and more of the best players on the world’s greatest stages of professional golf and all around the world are choosing TaylorMade." - David Abeles.

But the key to me, and one of the really great stories that went untold in 2018, was the fact that there was an awful lot of non-contracted players on the PGA Tour and other Tours that are choosing to play whatever products they want. Even if you look at the winners of the 2018 British Open, US PGA Championship and US Open, those athletes played TaylorMade. And they are not even part of this discussion of our Tour staff. And there is an adage in our organisation that if contracts and Tour relationships weren’t monetarily based, they were solely based on performance, then TaylorMade would have more products in play than any other brand.

And a real good example of that was back in 2016, when Nike decided to get out of the equipment and golf ball business. Nike had 25 contracted athletes playing their equipment and golf ball. At that point in time that they no longer were making products, 22 of those 25 contracted athletes came and played TaylorMade. That wasn’t contractual that was because they believed that TaylorMade were the best products to help them play better. So, that’s how we think about athlete relationships to help inspire golfers to connect with the TaylorMade brand.

In that non-contracted space that has become a big story in golf equipment, do you think it is almost a better story having players without a contract winning major titles with TaylorMade product than those contracted to the company? The one thing that we have chosen to do, which is the hardest path to choose in any business, is to really lead in innovation. These players that are with us, whether they’re contracted or not, they see that, they’re inspired by it and they believe in it.

Three of your biggest name staff players don’t wear a TaylorMade hat. Is that another sign of the evolution of sponsorship?

Of course we would love to have every one of our players wearing TaylorMade headwear, but that isn’t always possible.

No matter how you look at it, the business economics won’t always add up.

But what is most important to us, is that we get to work with the those athletes, Tiger is a great example.

Developing products for him, that subsequently lead to developing products for golfers, and again Tiger’s following is second to none. Tiger by his own accord loves to talk about TaylorMade. Because as he has made this latest comeback, he has realised that he had to create a golf swing and that perhaps the technology that he was using historically, wasn’t going to serve his new golf swing in the future.

In fact, I just got done meeting with him a few weeks ago, and was thrilled to hear him talk about his willingness to test new products because of where he is in his professional life and how he swings the golf club today.

So, it is another testament to how these athletes view the company. But to go back to your original question, certainly would love to have them wear TaylorMade hats, but we do a wonderful job with those athletes communicating to the world that they are TaylorMade athletes. So, whether they have branding on television, or they are pushing content through their social channels or we are creating content for our own channels, Tiger and Jason and Rory even though they may have a swoosh or their own logo on the front of their hat, they all play TaylorMade and I believe most golfers around the world know that. 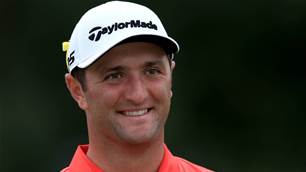