Henrik Stenson has played one of the greatest final rounds in major history to outgun Phil Mickelson and win The Open Championship by three strokes. Brendan James reports from Royal Troon.

HENRIK Stenson has played one of the greatest final rounds in major history to outgun Phil Mickelson and win the 145th Open Championship by three strokes.

The big-hitting Swede signed for an eight under 63, including 10 birdies, to keep his American playing partner at bay and claim his first major championship.

The history books will have to be re-written after Stenson’s dominating display to capture the Claret Jug. 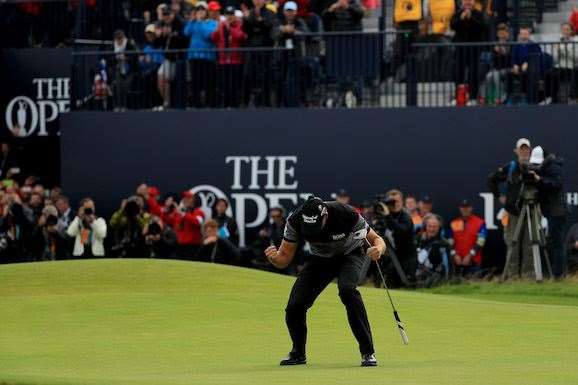 Henrik Stenson makes his putt for 63 and a place in Open and major championship history.
PHOTO: Mike Ehrmann/Getty Images.

Stenson's final stroke of his record round was a 20-foot birdie putt on Royal Troon’s 18th hole. For a millisecond it appeared his ball would rest on the edge of the cup before it tumbled in, to match Johnny Miller for the lowest closing round by a major champion. It also surpassed the lowest final round by an Open Champion, which was held by Greg Norman’s 64 in 1993.

The closing birdie also gave him a 20 under 264, the lowest 72-hole score in major championship history, and supplanted Norman’s 267 finish at Royal St Georges as the lowest ever Open total.

Stenson also joins Tiger Woods, Nick Price and Norman as the only players to win The Open with all four rounds in the 60s and he’s the first male player from Sweden to win a major championship.

Not forgotten in all of this is the fact he finished three clear of Mickelson, who had a flawless bogey-free 65 and posted a 17 under 267 – a score would have won all but two Opens dating back to 1892 when the Championship was first played over four rounds. It is the 11th time Mickelson has finished runner-up in a major championship. 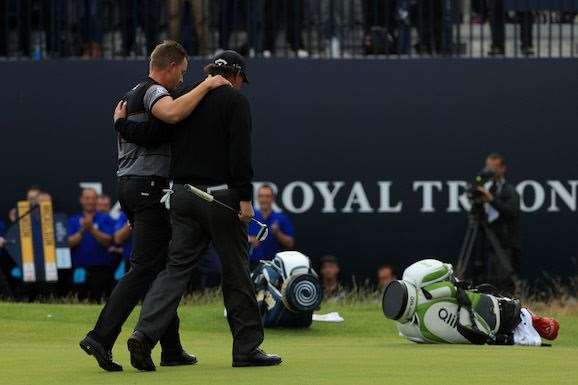 Stenson walks arm-in-arm off the 18th green with Phil Mickelson after their fantastic final round duel. PHOTO: Mike Ehrmann/Getty Images.

“It hasn't quite sunk in yet, but I'm very happy,” Stenson said. “Very proud of the way I played. It was a great match with Phil. It seemed like it was going to be a two-horse race, and it was all the way to the end.

“I'm just delighted I managed to do that with a couple of birdies at the right time on the final stretch.”

The 40-year-old, who had previously had seven top-four placings in majors since 2008, said his victory in the BMW International in Germany last month had given him the belief that it was his turn to win a major.

“I felt like this was going to be my turn,” he said, casting a glance at the Claret Jug.

“It's not something you want to run around and shout, but I felt like this was going to be my turn.

“I knew I was going to have to battle back if it wasn't, but I think that was the extra self-belief that made me go all the way this week.” 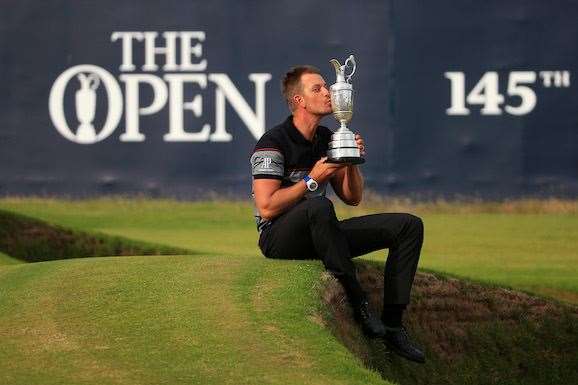 No more than two shots separated Stenson and Mickelson over the final 40 holes of the championship. Heading into the final round Stenson had a one-stroke advantage over the 46-year-old. There was a further five strokes back to American Bill Haas in third place.

The final pairing was greeted to the 1st tee like two boxers entering the ring. They then went about trading blows with one moment of golfing brilliance after another. Where a boxer might kneel in his corner and say a Hail Mary, Mickelson planted a kiss on his fingers and touched the glass trophy cabinet holding the Claret Jug, sitting on the side of the tee. Beside him, Stenson stared down the fairway as if looking for something … perhaps a place in history?

It took one hole for the overnight lead to change, as Stenson three-putted from the front edge of the green for bogey and Mickelson made his first birdie of the day to move to 12 under and take the lead by one.

At the 2nd, Mickelson missed the green right but lipped out with his chip. Stenson rolled in his birdie to square the ledger and birdied again at the next, with a 20-foot bomb, to regain the lead by one shot.

The par-5 4th hole loomed as a turning point with both men able to reach the green in two shots. Mickelson was brilliant, finding the putting surface with a missile like iron before making his long eagle putt. Stenson also found the green with his second shot approach and two-putted for birdie to move alongside Mickelson at 14 under. 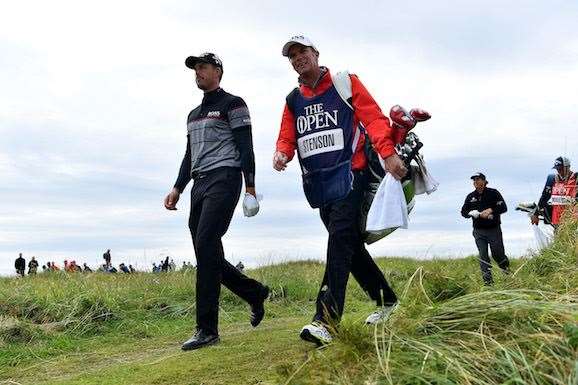 Stenson and his caddie Gareth Lord walk ahead of Phil Mickelson during the final round duel.
PHOTO: Stuart Franklin/Getty Images.

Both men birdied the next par-5, the 6th hole, to move to 15 under and eight shots clear of third place, which was then occupied by England’s Andrew ‘Beef’ Johnston.

Stenson edged ahead again at the Postage Stamp when he rolled in an uphill 15-footer that never looked like missing.

On the tough 10th, the duelers took the battle for the Claret Jug to a new level with pinpoint iron shots that made a mockery of the travails the rest of the field had with the hole over four days. Both men birdied, with Stenson moving to 17 under and Mickelson one shot back.

At the next, Stenson made his second three-putt bogey of the round and they were square once more.

As he had one in the third round, Mickelson made a miracle par on the testing par-4 12th hole. This time he holed a 20-foot par-saver to ensure he walked to the 13th tee sharing the lead. 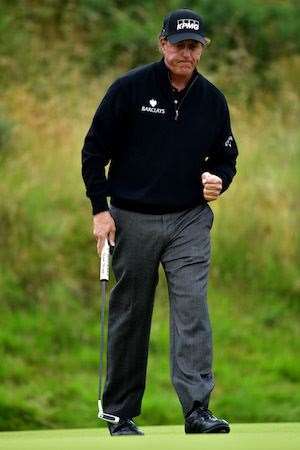 On 14, Stenson grabbed his seventh birdie of the round, which kick started his phenomenal trek back to the clubhouse. He birdied again at the 15th, this time from the edge of the putting surface, and the margin was all of sudden two strokes.

At the par-5 16th, the duo blasted second shot approaches onto the green and it was Stenson who putted first. His eagle putt ran by the hole and left him five feet coming back for his birdie. In the meantime, Mickelson’s eagle appeared on track less than a few feet from the cup but broke suddenly to the left, burning the edge of the hole. He tapped in, Stenson cleaned up for his birdie and the two-stroke status quo remained.

Playing first on the par-3 17th, Stenson flushed a 4-iron onto the green. When Mickelson missed the green left, the game’s oldest trophy was Stenson’s to lose. Mickelson made an improbable par but was now two shots behind with one hole to play.

Stenson, again playing first, contemplated hitting his 3-wood on the long par-4 but instead went for his 5-wood, which turned out to be a wise decision as his drive finished 20 centimetres short of the fairway bunker that ended Greg Norman’s chance of an Open win at Troon in 1989. When the big Swede hit the green with his second shot, Mickelson’s run was done. He made his regulation par and watched as Stenson’s final stroke – his 10th birdie of the day – toppled below ground.

Mickelson agreed it was a tremendous display of golf from Stenson and it was bittersweet to have played so well but to finish second to one of greatest ever final rounds in a major.

“It's disappointing to come in second, but I'm happy for Henrik,” Mickelson said. “He's really a great champion. We've been friends for some time. I've always thought that he is one of the best ball-strikers in the game and that major championships are perfectly suited for him.

“I knew that he would ultimately come through and win. I'm happy that he did. I'm disappointed that it was at my expense.

“It's probably the best I've played and not won.

“I think that's probably why it's disappointing in that I don't have a point where I can look back and say, I should have done that or had I only done this.

“I played a bogey-free round of 65 in the final round of a major, usually that's good enough to do it, and I got beat. I got beat by 10 birdies. It's not like other guys were out there doing the same thing. It was a challenging day.”

Their Troon match-up was certainly reminiscent of the famous "Duel in the Sun" at Turnberry in 1977, when Tom Watson shot 65-65 to beat Jack Nicklaus 65-66 by one stroke after leaving the rest of the field in their wake.

“When we got it going on the front nine, after the first probably six holes, it was pretty obvious that it was just us,” Mickelson said. “I always thought there were a couple of guys right behind us that could make a move, and if they got off to a hot start and we were struggling a little bit, it was going to be more than just two people duelling it out.

“But after six holes, it was pretty obvious it was going to be just us.

“It certainly crossed my mind a little bit out there today that match when Jack and Tom went head to head there in '77. I certainly was thinking about that. I know that I wanted to be more of Tom in this case than Jack, but unfortunately – I understand how Jack feels. It's bittersweet, I guess.” 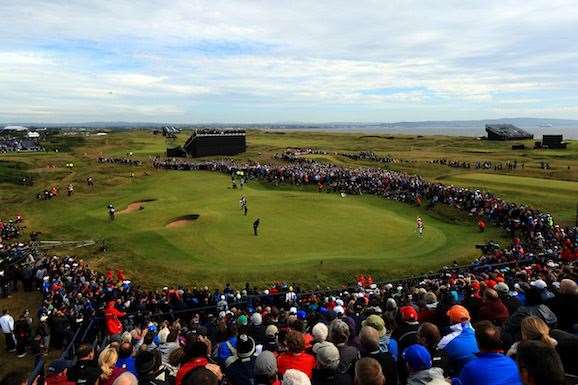 The gallery ring the 14th hole as the duel reaches its climax in the final round.
PHOTO: Mike Ehrmann/Getty Images.

For the ‘Tom’ in this scenario, it felt special to beat a player of Mickelson’s caliber and experience in what might become known as ‘The Duel In The Gloom’.

“We managed to pull away from the rest of the field and we both played some great golf,” Stenson said. “It makes it even more special to beat a competitor like Phil.

“He's been one of the best to play the game, and certainly in the last 20 years. So to come out on top after such a fight with him over these four days, it makes it even more special.”

He added that he was extremely proud to be the first male Swede to win a one of golf’s Grand Slams after so many before him had tried.

“It's been a long time,” he said. “I feel very privileged to be the one to hold this trophy.

“There's been many great players from my country tried in past years and decades and there's been a couple of really close calls. Jesper (Parnevik), in particular, twice … he actually sent me a message, ‘Go out and finish what I didn't manage to finish’, and I'm really proud to have done that, and it's going to be massive for golf in Sweden with this win.”

After breaking so many records and grabbing that first major win, what does he do for an encore?

“Yes, we're only just getting started, aren't we?” he laughed. “You never know once you open the floodgates what might happen.

“We've got a big schedule this summer. It's PGA in a week's time and then the Olympics. I was going to have a nice couple of relaxed days back home with the family. We'll see how well that goes.”

For the record, J.B Holmes (69) finished outright third at six under – 11 shots behind runner-up Mickelson – and one stroke clear of fellow American Steve Stricker (69) in fourth. Rory McIlroy fired a closing round 67 to move into a tie for fifth with England's Tyrell Hatton (68) and Spain's Sergio Garcia (69) all at four under. 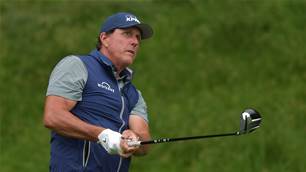 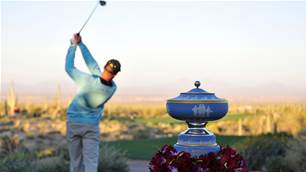