It’s no surprise news of the Premier Golf League has taken a back seat to the pandemic in recent months but just because the Saudi backed Tour hasn’t been in the news doesn’t mean they haven’t been active.

According to a story by Guardian golf writer Ewan Murray this week, seven players – including Australia’s Adam Scott – have been sent formal offer letters to join the League.

The Premier Golf League is one of those intriguing ideas that sounds fantastic in theory but may not live up to the hype in reality.

"The concept is a simple one: to get the best playing against the best on a regular basis which, at face value, sounds a perfectly fine idea."

For those not familiar, the league would feature 48 players teeing up in 18 events of 54 holes each. 10 of the tournaments would be played in the US, the rest at yet to be determined international venues.

An individual winner would be crowned each of the first 17 weeks though players would also be part of 12 four-man teams. The final event of the season would be the teams championship.

The concept is a simple one: to get the best playing against the best on a regular basis which, at face value, sounds a perfectly fine idea.

But in a game where history and tradition count for more than cash at the top level, it’s difficult to see what’s in it for fans.

Yes, they would get to see a smattering of the world’s best players (more on that later) but what would they be playing for?

There’s a reason The Masters and Ryder Cup have such huge viewing audiences compared to week-to-week events and it’s not because they boast the biggest purses.

Fans are drawn to the spectacle of the elite playing for something that matters, something more than money, and that’s an impossible energy to create overnight.

None of which is to say there aren’t interesting facets to what the PGL is proposing. The team element is intriguing as is the potential international schedule.

"The other issue the League will face – and quickly – is that it seems highly unlikely they will be able to claim having the ‘best playing against the best’."

But ultimately, golf at the top level has to be about more than money and from the information available to date, this concept simply isn’t.

The charity match involving Rory McIlroy, Dustin Johnson, Matthew Wolffe and Rickie Fowler back in May should have been a huge hit but it was – frankly – ho-hum.

The Woods/Mickelson/Manning/Brady shindig the following week admittedly fared better but it seems fanciful that celebrity alone is a sustainable model for a year-long schedule.

The other issue the League will face – and quickly – is that it seems highly unlikely they will be able to claim having the ‘best playing against the best’.

Rory McIlroy has pooh-poohed the concept (though did leave the door open when he said if everybody else goes, he might have to as well) and Brooks Koepka was adamant in March he would not be part of the rival circuit.

Tiger Woods has been non-committal though if the League could lure him away from the PGA Tour that might be a game changer.

If not, what the PGL will actually boast is a handful of the most marketable players with a few of the best sprinkled in for good measure and a spoonful of credibility.

It remains to be seen whether that is a recipe for success but given this week’s revelations it looks like we may soon get to find out. 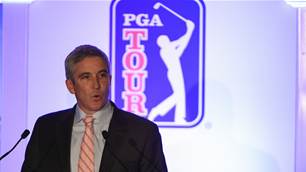