At the height of his powers Tiger Woods would put himself into a position to win and then scare the hell out of his opponents. One by one they would fall by the wayside and Woods would have another trophy for the pool room.

According to veteran pro Brett Rumford, Adam Scott possesses that same aura when he’s on his game … he strikes fear into his opponents, which makes playing alongside him as tough as holing a slick three-foot downhill breaking putt … with your eyes closed. 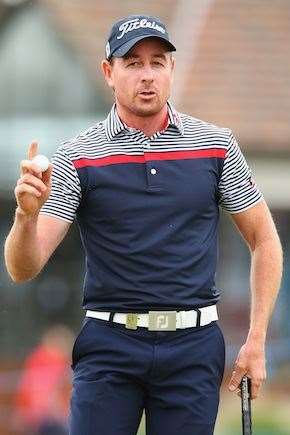 Rumford fired a second round seven under 64 to get to six under and just two shots behind leaders Scott and Victorian journeyman Peter Wilson at the halfway mark of the UNIQLO Masters. Despite the quality of his round, the 38-year-old with nearly two decades of professional experience says it is easy to fear a quality player like Scott.

“I would still fear Adam Scott,” Rumford said. “It's hard not to. His game is so, big, you fear his ability, what he can do, what he can reduce a golf course into with his sheer power and length. It's hard not to be intimidated by that kind of ability, no doubt about it.

“I mean, yesterday, he probably missed five or six golf shots out there. But that's his ability, he hits it very straight; a golf course like this, he's going to be a hard man to beat, obviously if he gets his putter going, as well.

“I fear his game, yes. I love Adam. He's an absolute top fella and I love to play with him.

“I've known Adam for a long, long while. I'm hoping I can get to play with him over the weekend. Yeah, just talk and catch up. It's about the only time I get the opportunity to catch up with him these days is walking fairways. He's a busy man.”

Like Tiger did in his halcyon days Rumford says Scott has the ability to intimidate his playing partners into submission, simply by hitting the ball as well as he does.

“You would feel that intimidation against any player that's playing well,” Rumford said.

“You can sense that aura with anyone, let alone Adam Scott. 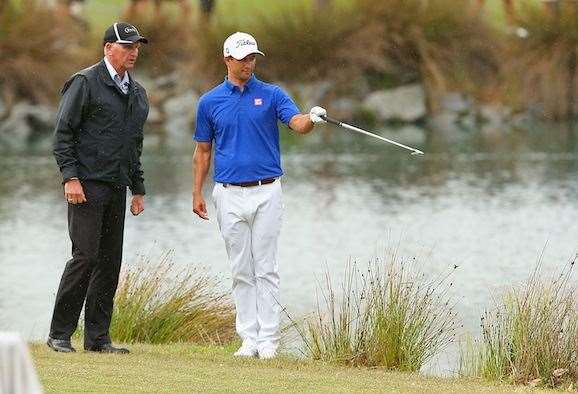 Adam Scott of Australia discusses taking a drop after hitting the ball in the water on the 13th hole. PHOTO: Quinn Rooney/Getty Images.

“But with Scotty, chances are he won't be doing that. He's in that zone more often. These top players, I can guarantee you that there's any player in this field this week, giving their best wedge from 9‑iron, 8‑iron, right the way through the bag, 3‑woods, drivers; their best shots with each particular golf club is good enough to be in the world's top ten and the best putts that they hit, simple as that, except it's just the repeatability of that, under pressure in all conditions. That's it.

“And with Scotty, he repeats like you would expect a world top ten player to repeat. And that's what's quite magnificent to watch and is quite awe‑inspiring.”

Wilson, with a pair of 67s, is tied with Scott at the top of the leaderboard and will head out in the final pairing together for the third round. In contrast to Rumford, Wilson says he doesn’t feel intimidated in the slightest by Scott, who he has never played with. 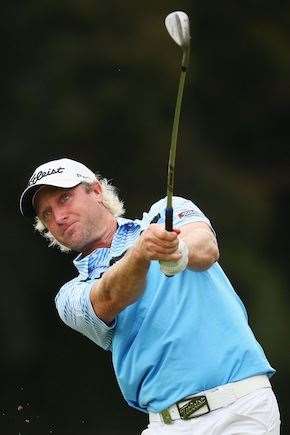 “I don't get intimidated by anybody,” the Victorian said. “I'm looking forward to seeing how he plays actually. I've never played with him. It will be good fun.

“He does have an aura about him for sure. He's up there with the Normans and Tigers of the world. Who knows what's going to happen tomorrow. I could shoot 64 and he should shoot 74, or vice versa. It's golf and just have to try to get it in the hole best you can.”

Scott threatened to leave the field behind midway through his second round as he reached 11 under through nine holes with four birdies added to his overnight score. He was five shots clear of his nearest rival and was yet to give any shots back to the Huntingdale layout.

An errant drive at the par-4 10th resulted in a double bogey. He flew his drive into the lake left of the 13th fairway and carded a bogey. He grabbed that shot back at the par-5 14th and looked set to have the 36-hole led on his own before closing with another bogey. The World No.12 was uncharacteristically wayward with the driver and if he is to go on and win his third gold jacket he needs to get it straightened out fast.

"I only hit one fairway with it, and I pulled it out five times," he said. “It's a shame, I felt like I didn't do too much too bad but the driver kind of cost me three or four shots today. I just couldn't get it in the fairway and take advantage of the par-5s”

He joked he might have to visit the adjoining Metropolitan Golf Club and hit some drives in the Saturday comp before the third round as the range at Huntingdale is too short.

Morri: A game of evolution