So just how did I end up in my underpants in the pond between the 5th and 6th holes in fading light?

Fair question – and there’s kind of a simple answer which involves the pursuit of our national championship. It’s a story of sacrifice, of one man and his dog in search of the ultimate prize. A valiant fight against the odds, a nowhere man making history where few men have thundered before.

This is both history, and his story – maybe.

Call it whimsy, call it daft, call it plain stupid – but some bugger planted the hickory bug in my butt about a year ago and I’ve had a terrible time trying to dislodge it. In fact, the little terror has squirrelled away at me and I’ve gone from having no clubs to too many in a very short while.

Goddamn you, Gumtree and Ebay. Goddamn you to Hoarder’s Hell!

To be fair, I do have some fairly nice gear. Including a lovely bag that was a mere $45 and four-hour round trip, but most definitely worth the effort.

So what of the undies in the dam?

“Call it whimsy, call it daft, call it plain stupid – but some bugger planted the hickory bug in my butt about a year ago and I’ve had a terrible time trying to dislodge it.”

Well, put simply, with the champs coming up – and it’s a two-day festival of plus fours, waist coats and very long socks – I thought if I want this trophy, it would be an idea to practice. Obviously, the old stuff is a little different to the new stuff, and you have to swing accordingly. Phil Baird, the pro at Manly Golf Club and a past hickory winner, has been the best at putting the swing into words. “Oily,” he says. “You want to make it oily.”

And what he means, I think, is to grease the club to the ball. You want to kind of slop that bad boy into the hitting zone. You can’t rush it, or overpower it or force it. With the hickories, you want to groove it in.

This is not golf, it’s dancing. Oily dancing – a cross between Saturday Night Fever and putt putt. You may have guessed, I’m a shit dancer (unless it’s Barnsie and I’m about .08, but that’s another column). But I can be a groover, which is a bit like standing at the edge of the dancefloor and jiving along without getting too involved.

Now, I’m not going to go to the range and slaughter those yellow pills with gay abandon, so I went to my local and played a few holes. All went well. A bit shaky off the 1st, but a bogey to start. Bogey on two, par on three and I’m feeling all slippery and greasy, headed for oily, which is where I want to be.

On four, I take another par.

On the 5th tee, I think I’ve jumped the shark and lubed myself into a reckless sense of self-worth, and have my eyes firmly set on the trophy. Just a reminder, this is a practice round, the real deal is not until the end of September and I’m flapping about mid-August. But still, I have a vision and a vision board and a spot cleared on my embarrassingly vacant trophy shelf.

“In fading light, I soldiered on. Pants off, with undies well hitched, I was a man on a hickory mission.”

On the 5th, (I’m two over) I tee it a little lower and swing my beautiful driver a little harder. The ball catches the toe of the club and spears off toward the 4th hole.

Damn it. Just hopeless. But it’s a practice round – for practicing. So, I replant the tee, have a slippery practice swing and promise to commit to the course for the real thing. And I do. By God, I do. The ball comes out low and strong into the Southerly Buster, but not quite as well as the beautiful golf clubhead, which has taken that moment to sever itself from the shaft and fly like a lost swan into the pond between the 5th and 7th holes.

And this was no ordinary driver; it worked. Honestly. I could actually give it some welly and it’d go really well. Which is why I had to go after it. Into the pond, ankle deep at first. Then knee deep. Fumbling around in the reeds and the duck shit and the dam scum.

In fading light, I soldiered on. Pants off, with undies well hitched, I was a man on a hickory mission.

The guy behind caught up. He smiled sympathetically and said, “Mate, if you need some balls…?” If only he knew. I had balls enough to hunt for my lost head, now I needed some luck. 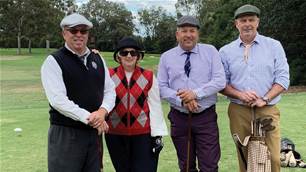 Daddo: The joys of playing with hickory clubs 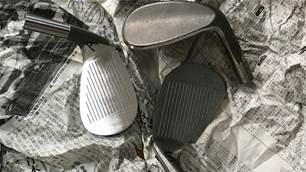 Daddo: I love it when a plan comes together 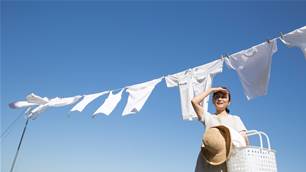