Every golfer has a secret: A hidden gem we file away and hope to remember at the start of a round, not the end. It rarely works out that way, though.

We forget. We wipe three of the first six holes and then it comes back, so we metaphorically whack ourselves in the face for being such an idiot.

Some golfers don’t know they have a secret. They think they front up to the course, pull out their clubs and blast away willy-nilly. But they do have a secret, it’s just their secret is so dang secret they can’t actually access it. I was like that.

Now I have a secret that is so good, so complete, so utterly awesome I cannot keep it to myself.

I’ll never forget the moment the secret arrived. It was lunchtime, I was at a conference at a golf course and instead of gutsing myself on the fine fare, I asked at the pro shop for a putter and a couple of balls.

Some golfers don’t know they have a secret. They think they front up to the course, pull out their clubs and blast away willy-nilly.

Seriously, it was like an epiphany. As if the clouds parted, the sun shone through and the fingers of God reached out and lit me up. It was like Elle MacPherson in the TAB ad walking up the beach and choosing me. It was, bloody epic, it was.

I dropped the balls on the turf, gave the putter a bit of a waggle and steadied myself.

The truth is, there’s a bit of a wobble on my backswing. My Golf Show comrade Paul Gow pointed it out one day as I lined up for a putt that could sink him. “Geeeeeeez,” he said. “Why do you do that? Why do you wave the putter round like that? How do you expect to get it back to the ball when you’re conducting a bloody orchestra on your backswing?”

This was news to me, (It wasn’t, actually. I’ve been in thumb-sucking denial for a long time) so I pled innocence and pretended to be hurt. Once the genie of ‘conducting a bloody orchestra’ was out, it was pretty much impossible to get it back in the bottle. Short putts were followed by longer putts as I tried to ram the club through the impact zone.

It was terrible. Truly awful. Then, this lunchtime, the clouds parted and the sun shone as the secret was bestowed by some agent of goodness I neither saw nor thanked.

The secret, golfing friends, is a sound. It’s the “pfffft” of the putter head as it travels backward across the grass at the beginning of the backswing. It’s a slow “pfffft,” not quick. Don’t rush your “pfffft.” There’s always time to “pfffft.” Always. It’s like kissing your kids goodnight, you make time to “pfffft” just as the “pfffft” always makes time for you.

Two holes later, Simon ‘The Born Again’ has a putt across a green the size of Tasmania. Up and down dale, it goes. Left, then right then left again until, until – plonk. The ball dove for the bottom of the cup.

It steadies the backswing. “Pfffft”ing gives tempo a chance. Gently back through the “pfffft”, then follow-through and away you go.

I know. You’re welcome. Some epiphanies you can’t keep to yourself.

In fact, during a game recently I was so in awe of the “pfffft” secret, I decided to share it with my playing partners. At first they couldn’t hear it, but they weren’t listening. Or they were listening, but didn’t know what they were listening for. It would be fair to say they were closed, the way some folks are to psychics, but that’s a whole other discussion.

“Listen carefully,” I urged. Simon, a solid five handicapper who looked back with the dull eye of a non-believer. “It’s simple, Simon,” I said. The dull eyes went dead. “If you take a knee, and put your head down near my putter you will hear the ‘pfffft.’

“Please, humor me,” I begged. “Get your studded ear down here and hear the ‘pfffft.’ It will change everything!” I tried to sound like Morgan Freeman but think it came out more like that tool from RBT.

“Fine,” he said. After he assumed the position, I gave him a couple of really good “pfffft’s” with my putter. “Heard it!” he said with the smile of the born again. “It really does go ‘Pfffft,’ doesn’t it.”

Two holes later, Simon ‘The Born Again’ has a putt across a green the size of Tasmania. Up and down dale, it goes. Left, then right then left again until, until – plonk. The ball dove for the bottom of the cup.

I swear an angel sang. 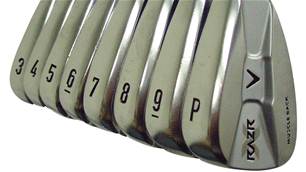 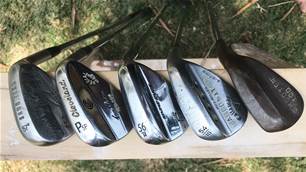 Daddo: “What if the older clubs performed as well as the newer clubs?”