Just after impact (pic 5) Scott achieves a more ‘correct’ position with the shaft pointing to the centre of his sternum, evidence that he is making a smooth stroke where the ball has simply gotten in the way, rather than applying a hit at impact.

RIGHT: Scott at the 2013 Australian Open, when anchoring the putter was allowed under the rules. PHOTO: Getty Images/Steve Christo - Corbis.

The same point in the stroke is also where evidence that Scott is playing within the rules and has had to adjust his stroke from previous years is clear. In the close up picture from 2013 (right) the butt of club is firmly pressed against his chest, causing his shirt to wrinkle and his chest to narrow, whereas in 2018 the distance between Scott’s right shoulder and left hand has increased. 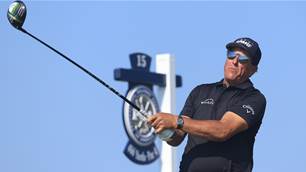