Steve Stricker wants Tiger Woods to be an integral part of the United States team at this year's Ryder Cup.

Stricker is not thinking of picking Woods as a player, but he said on Wednesday that he plans to bring him on board as a vice-captain for the showdown with Europe at Whistling Straits in Wisconsin in September.

"He's still got a lot going on and his spirits are great, though, as of late and ... he seems like he's in a better place, though he's still got some ways to go," Stricker said.

He was referring to the serious car crash in Los Angeles in February that left Woods with serious injuries, including multiple leg fractures.

The 15-times major champion is recuperating at home in Florida and there is no word on when, or even if, he will be able to play again.

"I'd love to have him there," Stricker said. "Who wouldn't, right? The guys really respect him.

"He would do anything for you and he's totally, totally vested in the situation and the process."

Woods will be a Ryder Cup captain whenever he chooses, perhaps as early as Italy in 2023.

Stricker has named Jim Furyk, Zach Johnson and Davis Love III as assistants for this year's event, with Woods destined to round out the leadership assuming he is healthy enough to make the trip.

Over eight Ryder Cup appearances, Woods has a surprisingly poor playing record in the fourball and alternate-shot foursomes.

Captains have found it difficult to find a suitable partner who was not overawed at the prospect of playing with the greatest player of his generation.

Woods's career record is 13 wins, 21 losses and three halves, with four of those wins coming in singles play.

But Stricker says 45-year-old Woods has evolved into an excellent team leader and is seen as an elder statesman by many of the younger players who grew up idolising him.

"As an assistant captain, he is all-in with everybody and the players love it. They love being around him and he adds a tremendous amount when he is there," Stricker said.

Speaking on the eve of the PGA Championship, Stricker also announced that this year's Ryder Cup format would be foursomes matches on Friday and Saturday morning, followed by fourball competition in the afternoon. 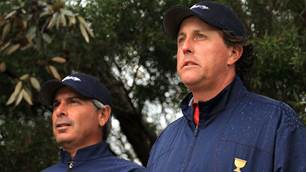 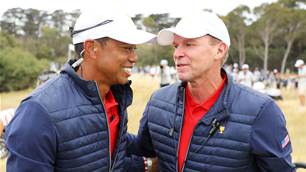 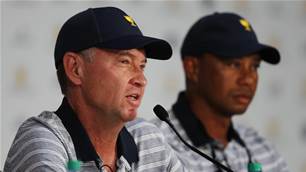