Tiger Woods is among four top-10 players who are skipping next week's Mexico Championship, a World Golf Championships event with no cut and a US$10.5 million (AU$15.6 million) purse.

Woods, who tied for 10th last year at Chapultepec Golf Club but was never in serious contention, did not offer a reason and was vague when asked this week about his schedule. He shot 73 in the morning at the Genesis Invitational, where he was the tournament host.

"I've been so busy with this event and trying to deal with all the little things that I haven't really focused on next week," Woods said.

Brooks Koepka will miss Mexico for the second time in three years. He had a wrist injury in 2018. Koepka will be playing his hometown Honda Classic the following week.

“I've been so busy with this event and trying to deal with all the little things that I haven't really focused on next week.” – Tiger Woods

Also skipping Mexico City from the top 10 are Justin Rose for the second-straight year and Patrick Cantlay, who is having elective surgery on his septum next week to be ready for The Players Championship and the weeks leading to the Masters.

Three other players from the top 50 are not playing – Rickie Fowler is missing for the first time, Henrik Stenson is absent for the second time in three years and Jason Day has never played in the Mexico Championship.

Koepka, Rose and Stenson have not finished among the top 25, while Fowler's best result was a tie for 16th.

Jordan Spieth decided to play after his tie for ninth last week at Pebble Beach moved him back into the top 50.

Woods will have played only twice going into the Florida Swing that begins his run to the Masters, at Torrey Pines and Riviera. Still unclear is his schedule leading to Augusta National.

The field will not be set until Monday. Players still can qualify through the top 50 in the world ranking or the top 10 in the FedExCup standings. 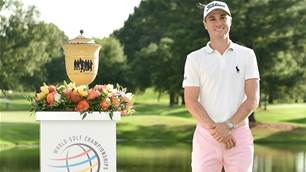