Pressure often diminishes our judgement, decision making and performance – which is probably why we have witnessed so many bizarre moments from major championship leaders over the years. Here are seven of the worst final-round major collapses in recent history.

Spieth held a five-shot lead with nine holes to play at Augusta before enduring an hour he will likely never forget. The American bogied the 10th and 11th holes and endured a disastrous quadruple bogey at the par-3 12th, where he dumped two balls into Rae’s Creek. He eventually finished runner-up with Lee Westwood, three shots behind English champion Danny Willett.

Plenty of people point to Scott’s collapse at Royal Lytham & St Annes in 2012 as one of the worst collapses in major history – and it’s pretty hard to suggest otherwise. The Queenslander was four shots clear with four holes to play, before spectacularly imploding with four straight bogies to hand good friend Ernie Els the Claret Jug.

Johnson didn’t exactly collapse at Chambers Bay in 2015 – but he certainly choked on the 18th hole, three putting from 12 feet to relinquish his national Open and first major victory. Spieth ultimately won the title after Johnson failed to force extra holes.

Norman was six strokes clear of Nick Faldo at the beginning of the final round and looked certain to break Australia’s Augusta duck. But the 41-year-old proceeded to shoot six-over 78 compared to the Englishman’s superb five-under 67.

Van de Velde only required double bogey on 18 to win the Open at Carnoustie. But the Frenchman's third shot landed in the Barry Burn – and he famously considered hitting out of the water before taking a drop. He then found the greenside bunker and got up and down for triple bogey to force extra holes against Scotland’s Paul Lawrie, who was eventually named Champion Golfer of the Year.

McIlroy was four shots clear at the beginning of the final round at Augusta and was looking to become the second-youngest Masters champion behind Tiger Woods (1997). But the 21-year-old Northern Irishman cracked under pressure, carding four bogies, one double bogey and one triple bogey in his round of eight-over-par 80. South African Charl Schwartzel birdied the final four holes to capture his maiden major title.

The par-4 18th hole at Winged Foot must haunt Mickelson to this day ...

Standing on the final tee, the American required par to win his national Open for the first time. Disaster struck when his drive cut into the trees – and his error was compounded when his second shot ricocheted off one of the overhanding braches. After finding the greenside bunker with his third shot, Mickelson was unable to get up and down to force extra holes with eventual champion Geoff Ogilvy.

Now 49, Mickelson has recorded six runner-up finishes at the U.S. Open and has therefore been unable to complete the Career Grand Slam. 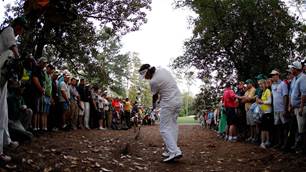