Andrea Lee only led once in her Round-of-16 match against co-medallist Alexa Pano in the 119th US Women’s Amateur Championship on a sultry Thursday afternoon at Old Waverly Golf Club. But it came at the most important time.

A two-putt par on the 23rd hole, the par-4 5th, sealed the victory for the No.2 player in the Women’s World Amateur Golf Ranking™.

A rising senior at Stanford University, Lee, 20, of Hermosa Beach, Calif., forced extra holes by converting a 12-foot birdie putt on the 18th hole. Lee and Pano, 14, of Lake Worth, Fla., then tied the next four holes before the longest match of the championship was finally decided when Pano failed to convert a 15-foot par putt after hitting a wayward tee shot into the two-and-a-half inch Bermuda rough.

Lee, a semi-finalist in 2014 at Nassau Country Club, earned a Friday morning quarterfinal matchup against 2018 USA Curtis Cup teammate Lucy Li, 16, of Redwood Shores, Calif. Lee and Li played one four-ball match together (3-and-2 win) at Quaker Ridge Golf Club in Scarsdale, N.Y., during a 17-3 victory over Great Britain & Ireland.

“She’s a tough competitor for sure, and it’s going to be a tough match,” said Lee of facing Li on Friday. “She’s a really solid golfer, very consistent, and so I think it’s going to take some of what I did today on the back nine and in the extra holes [against Pano] to beat her.”

Pano, a 2019 US Women’s Open qualifier who was the runner-up in last year’s US Girls’ Junior, took control of the match early, winning three of the first eight holes. Lee, who shares the Stanford school record with eight collegiate victories, birdied back-to-back par-5s (Nos.9 and 10) to trim the deficit back to one hole. She eventually tied the match with a birdie on the par-5 15th, only to see Pano retake the lead with a birdie on the ensuing hole.

That set up Lee’s dramatic birdie on the 393-yard closing hole. Her approach barely stayed on top of the ridge on the upper-right portion of the green, and when Pano failed to hole out her chip from just off the green, Lee calmly stepped up and drained her putt.

“From 9 on, I played some of the best golf I think that I’ve played in a while.” – Andrea Lee

“From 9 on, I played some of the best golf I think that I’ve played in a while,” said Lee, who earlier on Thursday defeated Brooke Matthews, 4 and 3, in the Round of 32. “I’m exhausted, but I played really solid today, and I’m proud of the way I handled it.”

Li, meanwhile, earned her third consecutive trip to the quarterfinals. The youngest qualifier in US Women’s Open history – she was 11 in 2014 at Pinehurst – overcame some shaky putting early in her match against Kent State University rising senior Pimnipa Panthong, 21, of Thailand, to earn a 2-and-1 win. Li made five birdies against one bogey over her last nine holes, including the clincher on the par-3 17th.

“My putting has been getting a lot better,” said Li, who is No. 4 in the WAGR. “These greens are a little tricky for me, but I started rolling it a lot better today, so I feel good.”

Albane Valenzuela, 21, of Switzerland, gave the quarterfinals its third top-five ranked player when she defeated No.4 seed and incoming Auburn University freshman Megan Schofill, 18, of Monticello, Fla., 4 and 3. Valenzuela, No.5 in the WAGR, is coming off sharing low-amateur honours in the Evian Championship two weeks ago. The 2019 US Women’s Open qualifier also was the low amateur in the 2016 ANA Inspiration and tied for 21st in the 2016 Olympics, one of two amateurs to compete in Rio de Janeiro.

None of the remaining competitors have played fewer holes over the first three rounds of match play than Gabriela Ruffels, 19, of Australia. The University of Southern California junior, who won last month’s North & South Women’s Amateur at Pinehurst (also a match-play event), has needed just 42 holes to dispatch her three opponents, including a 6-and-5 victory over incoming Stanford freshman Brooke Seay, 18, of Rancho Santa Fe, Calif., in the Round of 16.

It definitely hasn’t been a breeze like the scores say, but this course is so hard, I think I’ve just been doing good with hitting fairways, hitting greens and staying consistent.” – Gabriela Ruffels

Seay had pulled off one Houdini act against an Australian in Wednesday’s Round of 64 (4 down with four to play) but couldn’t recover from this major deficit against Ruffels. The daughter of tennis professionals – her mother won an AIAW individual title at USC in 1981 and her father is an Australian Open doubles champion – went 6 up after eight holes and cruised home, playing the equivalent of one-under golf (with concessions) over the 13 holes.

“I’m playing pretty well,” said Ruffels, who has USC coach Justin Silverstein serving as her caddie. “I think the scores don’t really reflect how tough it’s been. It definitely hasn’t been a breeze like the scores say, but this course is so hard, I think I’ve just been doing good with hitting fairways, hitting greens and staying consistent.”

Aneka Seumanutafa, 18, of Emmitsburg, Md., almost witnessed a major comeback when 2018 Great Britain & Ireland Curtis Cup competitor Annabell Fuller, 16, of England, erased most of a six-hole deficit with four consecutive birdies from No.11. Seumanutafa, a rising Ohio State sophomore who played three-under golf over the first 10 holes, stopped the momentum with a winning par on the 16th hole to earn a 3-and-2 win.

“That you know you’re talented, you know you can do it, just stay focused,” said Seumanutafa on what she told herself when Fuller was on her birdie binge. “Your game is out there, it’s on the golf course.

“She fought back really hard. She made some quality shots out there. But I didn’t feel like I was losing it out there. I was just playing my own game, just trying to stay focused.” 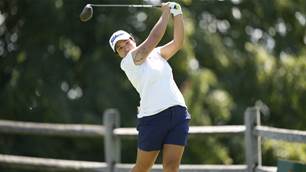