New South Welshman Cameron Davis will attempt to fly under the radar but says he'll be ready for the challenge if the spotlight finds him in just his second major championship.

The 26-year-old Davis fronts at the US PGA Championship for the first time, just his second career major and first in nearly three years, with a clear strategy of trying to treat it like any other event.

Before this week's challenge at the Ocean Course in South Carolina, the Sydney native has only the 2018 Open Championship – earned via his Australian Open victory in 2017 – on his major championship resume.

His win at The Australian came with a final-round blitz to overcome PGA Tour stars Jason Day, Jordan Spieth, Matt Jones and Cameron Smith among others.

"And while I'm trying to keep things calm, I'm not afraid of the attention that comes with playing well." - Cameron Davis.

It was this confidence-filling result, and how it was achieved, that shapes his strategy this week.

Back then, Davis started six shots off the lead on Sunday before a seven-under 64 propelled him to victory.

The deficit meant he played without feeling pressure and as such let his talent flourish.

"That was a really good example of how I work well, which is not paying attention to what is going around me, and now I am spending most of my time trying to replicate that environment. That includes this week," Davis told AAP.

"I wasn't thinking about it or structuring it that way at the Aussie Open, but now I am trying to structure it like that. I'm concentrating while I'm hitting shots but in between I'm trying to relax and keep things as chill as possible."

While Davis tries to block out the enormity of the event, he will also fall back on the experience of a more than respectable tied 39th at Carnoustie on his major debut where he matched four-time major winner Brooks Koepka when paired together in the final round.

In the midst of his best-ever PGA Tour season, Davis could be poised to shock plenty of people.

"I'm excited. My form has been a little sketchy the last few months after a good start to the season where I gained some great experience being in the mix, but the good news is my last tournament showed there is some good stuff in there," Davis said.

"And while I'm trying to keep things calm, I'm not afraid of the attention that comes with playing well.

"There's work to do to get there but there's no reason to be scared of that. If that's this week, I'll need to be ready." 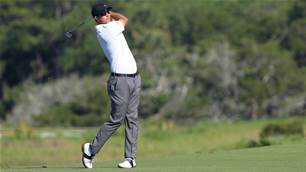 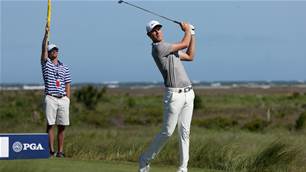