The second annual Augusta National Women’s Amateur had a tough act to follow.

The final round of the inaugural edition two years ago at Augusta National Golf Club had so many memorable elements – passion, sportsmanship and superb shot-making, all in full bloom with Jennifer Kupcho and Maria Fassi leading the charge around famed Amen Corner. The photo of the two fist-bumping while walking off the tee at 12 will live forever in championship history.

But the winner that week was decided well before the 18th green. Kupcho played the final six holes in five under par and distanced herself from the field, defeating Fassi by four strokes.

This week had many of the same traits as its predecessor but rather than a two-player show late on Saturday, there were as many as nine who had the chance to win in the closing stretch.

Seventeen-year-old Tsubasa Kajitani of Japan shot an even-par 72 and defeated Emilia Migliaccio on the first hole of a sudden-death playoff to win the Augusta National Women’s Amateur. She put on the finishing touches with a spectacular two-putt on the 18th green and gave a mini fist-pump before exchanging hugs with her caddie and Migliaccio. It was then that she immediately felt the emotion of her accomplishment. Kajitani shot 73-72-72 for a one-over-par 217 total and became the first player from Japan to win at Augusta National.

“I can't really imagine [the reception I will receive] when I'm back to Japan,” Kajitani said. “But hopefully everybody is happy and will enjoy, and I'm looking forward to going back to Japan.”

Kajitani, ranked No. 26 in the World Amateur Golf Ranking (WAGR), entered the final round tied for fifth place. While others were jockeying for position and going through ups and downs, she remained steady and continued to quietly navigate her round. After an early bogey on the par-3 fourth hole, Kajitani rebounded with birdies on Nos. 8, 14 and 15.

But Kajitani ran into trouble with a double bogey on the par-4 17th and thought for a moment that her hopes may have been dashed. However, her caddie, Chad Lamsback, told her to shake it off and focus for only one more hole. She did, made par to tie Migliaccio with the clubhouse lead, then sat back to watch the final three groups finish.

The playoff returned to the 18th hole and Migliaccio hit her second shot right of the right- greenside bunker. Her third found the bunker and she was not able to get up and down, finishing with a bogey five.

“To be honest, when I came to the States, I didn't expect that I’m going to win the tournament,” Kajitani said. “And then day-by-day I have been confident and then I won the tournament.”

Migliaccio, ranked 15th in the WAGR, shot two-under 70 and finished a full hour before the final group completed their rounds. She was pleased with how she played when she was done – after all, she did make five birdies on the day – but moment by moment, her name started creeping toward the top of the leader board without hitting a shot.

Although Migliaccio was pleased to find herself in a playoff, she was not pleased with her performance in it.

“It’s hard to bogey and lose to a par,” Migliaccio said. “If they birdie, it’s like, well, did everything I could. But I wanted to hit a better shot and felt good over the club and was happy to be in the fairway but just didn't work out.” Kajitani celebrates with her caddie on the 18th hole after clinching the title. PHOTO: Augusta National.

The 21-year-old senior at Wake Forest University has no plans to turn professional after she graduates. In fact, she’s already a published novelist, has a job lined up beginning this summer and hopes to remain in the golf industry for a long time.

The top-ranked Zhang plans to have a long career in golf too as she has committed to attend Stanford University in the fall. But on this sunny day, there was disappointment even though it never showed on her face.

Zhang, from Irvine, California, entered the final round tied for the lead with Sweden’s Lindblad and played the first 12 holes in even par with one birdie and one bogey. But she ran into difficulties on the par-5 13th hole when she had two penalty strokes that led to a triple-bogey eight.

Her drive was left and even though she saw where it dropped, no one was able to locate it. She went back to the tee and hit a second drive. That one found the fairway and, standing 235 yards to the pin (only 202 yards to the front edge), she decided to go for the green and came up short. Zhang found that ball but was not able to get a club on it and took another drop and, from there, was not able to get up and down.

Somehow, Zhang composed herself and hit her approach shot to three-feet on the par-4 14th hole and the birdie vaulted her back into a share of the lead with Migliaccio, Kajitani and Fredgaard. She needed to par the remaining four holes to get into the playoff but made bogey on the par-4 17th hole. Zhang hit her approach shot to 12 feet on the final hole but was not able to make birdie, closing the day with a three-over-par 75.

Despite a disappointing finish, Zhang never entertained the thought of feeling badly for herself, displaying poise, grace and perspective that are not usually commonplace with most high school seniors.

“Sometimes you can’t really be too hard on yourself, especially when you are on the greatest stage of amateur golf,” Zhang said. “This is Augusta National. I think it’s our responsibility to just be excited and happy to be on this golf course and to be able to be in contention. I don’t really want to take any bad memories away from here. I don’t think that’s what anyone wants.” 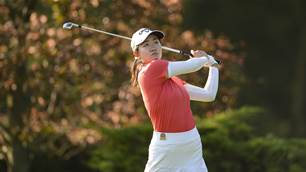