Danielle Kang shot a bogey-free, two-under 70 to win the Buick LPGA Shanghai for the second consecutive year on Sunday with a tournament record 16-under par 272.

The 27-year-old American began the day one stroke behind compatriot Jessica Korda, who shot a final-round 72 to finish second at 15 under.

Victorian Su Oh finished tied 38th on two over after a 78, with West Australian Minjee Lee ending up two shots further back.

Kang birdied the 15th to pull two strokes ahead, but Korda responded with a birdie of her own on 17. Kang then holed a three-foot par putt on the 18th to win her third career title.

"There were a lot of birdie opportunities. I made some really great up and downs. I've never been more nervous than the last putt for some reason, but I made it," Kang said.

“I've never been more nervous than the last putt for some reason, but I made it.” – Danielle Kang

Korda had three birdies and three bogies for even par on the day.

China's Liu Yu shot a seven-under 65 to surge into a three-way tie for third with Japan's Nasa Hataoka and LPGA rookie Kristen Gillman at 13 under and the best finish of Gillman's career.

American Megan Khang tied the 18-hole scoring record with an eight-under 64, including a hole-in-one on the par-3 11th to finish tied for seventh.

Brooke Henderson, of Canada, carded a 1-over 73 to drop from third place into a tie for ninth with top-ranked Jin Young Ko and Nelly Korda at nine under.

The Buick LPGA Shanghai was the first of four-straight events in Asia. The tour moves to Busan, South Korea next week for the BMW Ladies Championship. 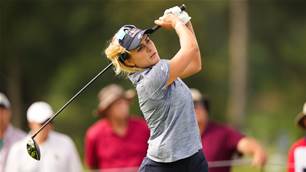 Thompson & Kang to skip the Evian 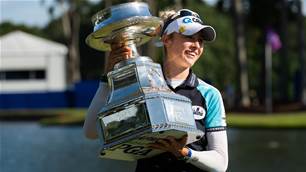