Since being introduced in the year 2000, Titleist’s Pro V1 and Pro V1x have secured top spot as the number one golf ball for Tour players and amateurs alike.

The new iterations for 2021 are designed to improve key performance characteristics through new and enhanced technologies.

Engineered for “longer distance, even more greenside spin and control and softer feel” according to the company, with a priority placed on consistency from ball-to-ball and dozen-to-dozen, the new models will be available in Australian golf shops from February 6.

“Our R&D and Operations teams have spent years engineering new technology into each and every component of 2021 Pro V1 and Pro V1x. When it comes to the performance and quality of these products, we will continue to go to every length possible to help golfers play their best and shoot their lowest scores.” Smith used his new ball of choice to become the first player to record four rounds in the 60s at The Masters, where he finished runner-up to Dustin Johnson.

“When I first tested it, it was a bit hotter off the driver, which was great,” Smith said. “The ball flight and windows were great. But the biggest thing that stuck out was the control coming out of the rough and around the greens. I can control my shots – especially those difficult, soft shots – so much better.”

The control, ball speed and spin Smith alludes to have been achieved through new core, casing layer and cover technologies, in addition to the aerodynamic improvement resulting from the new dimple designs. To increase spin and control around the greens, as well as durability, a new cast urethane elastomer cover formulation was developed. The new cover significantly marks the softest ever used in the Pro V1 range of golf balls, which despite key improvements in the same areas of performance remain easily distinguishable via flight, feel and spin.

Pro V1 remains as the option for the majority of players offering “the greatest combination of speed, spin and feel in the game” according to Titleist. Pro V1 possesses a lower more penetrating flight with a softer feel, whereas the firmer feeling Pro V1x flies higher with more spin.

The result of Titleist’s R&D team’s commitment to further improving upon the No.1 ball in golf and more than 1,900 patterns being tested since 2000, the new dimple patterns – 388 dimples for Pro V1 and 348 for Pro V1x – extend ball flights for more distance, create more flight consistency and further refine the penetrating flight of Pro V1 and higher flight of Pro V1x.

“When we find a pattern we like, the next step is making sure we find the best possible version of that pattern by building and testing different variations of dimple depths, diameters, shapes and surface coverages,” Titleist R&D’s Director of Aerodynamics & Research Engineering Mike Madson said.

“It takes years of work – we’ve been working on these new packages for almost a decade – but it is that commitment to research that ensures each golf ball is optimised to fly at its longest and most efficient trajectory.”

Offered in both white and high optic yellow, every Pro V1 and Pro V1x is produced at Titleist’s Ball Plants 3 and 4 to guarantee consistency and afford golfers complete trust in the golf ball of choice’s performance.

To find out more, visit www.titleist.com.au 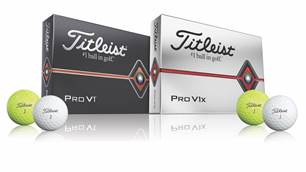