It has been 10 years in the making so its no surprise the opening of this new course has been greeted with open arms by golfers in Sydney’s southern suburbs.

This state-of-the-art sporting facility has been developed on treated and compacted land with 850,000 tonnes of clean fill. Work commenced in 2000 and includes six playing fields, 12 netball courts, an athletics track as well as award-winning The Ridge driving range.

Lying at the heart of the development now is The Ridge golf course designed by James Wilcher, who includes a number of highly-ranked courses on his resume, including The Cut in Western Australia and Pacific Dunes, near Port Stephens in New South Wales.

He says The Ridge was the most difficult project he has ever been involved with due to the technical aspects involved in getting a canvas on which to create the layout. “It was a difficult technical job as it required a substantial bridging layer to separate the landfill from the golf course,” he said. “This took about 1.8 million cubic metres of mainly crushed sandstone, mined from a new landfill operation up the road. The topsoil was also manufactured at the new landfill station from green waste and crushed sandstone.”

Once this layer was bedded down, Wilcher was able to outline his plan for the course, which is a par-72 that measures 6,106 metres off the back markers.

The first nine holes opened in 2009 and at the time it was the first course of any size to open in the Sydney metropolitan area in five years. The second nine holes opened on February 2 this year and more than 600 golfers tackled the layout in its first weekend of play. The quality of the layout has seen plenty of return business to the public course, with more than 5,000 rounds being played per month since all 18 holes were opened for play. 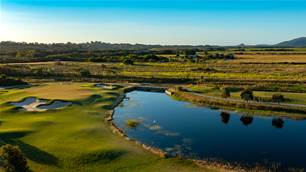