Major fever continues this week with the 67th instalment of the Women’s PGA Championship at Atlanta Athletic Club in Georgia. Who will lift the LPGA Champions Trophy?

COURSE: The Highlands Course at Atlanta Athletic Club was designed by Robert Trent Jones and Joseph Finger and opened for play in 1971.

World No.3 Nelly Korda arrives in Georgia off the back of her victory at the Meijer LPGA Classic last week and will be eager as ever to join the exclusive major winners’ club.

The 22-year-old American was forced to withdraw from this event last year – citing back pain – but otherwise has never missed the cut at this championship from four appearances and was T3rd at Hazeltine National in 2019. The younger Korda sister, who claimed the Australian Open in 2019, has already won twice this year and deserves her place as the bookies’ co-favourite.

Three-time champ (2013-2015) Inbee Park isn’t showing any signs of slowing down, registering 15 top-10s from her past 23 starts, including two victories and three runner-up finishes.

The legendary South Korean was second behind runaway winner Sei Young Kim at this championship last year and was T7th at Hazeltine the year before that. She also shared seventh place at the ANA Inspiration and US Women’s Open earlier this year.

Park, 32, is currently ranked eighth on Tour for driving accuracy, fourth for putting average and second for her scoring average of 69.13. No wonder she’s favourite in the betting alongside Nelly Korda.

Hannah Green won this title in 2019 and has played fairly consistent golf throughout the year, posting six top-15s from 10 starts, including her runner-up finish at the Women’s World Championship at the end of April.

The Perth product shared 23rd place when defending this championship last year, despite her disappointing opening round of seven-over 79.

Green has added nearly 15 yards of distance off the tee this year and is currently ranked 15th on Tour for driving distance. Her accuracy, however, has suffered and she is now 143rd for fairways hit.

The 24-year-old is deadly once she’s on the putting surface, though, sitting eighth for her putting average of 28.92.

72-HOLE RECORD: Defending champion Sei Young Kim holds the aggregate scoring record thanks to her 14-under 266 last year. Cristie Kerr (2010), Yani Tseng (2011) and Inbee Park (2015), meanwhile, all reached 19-under for their respective victories. 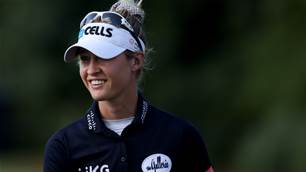