The Queensland Open returns to Pelican Waters Golf Club for the second time in its long history this week, with a number of past champions in the field. Here is all you need to know about the event, including players to watch, course info and TV times.

DEFENDING CHAMPION: Queensland resident Anthony Quayle claimed his maiden professional win at this same venue in 2020. The Japan Tour regular reached 15-under-par over four rounds before defeating then amateur Jack Thompson on the first hole of a sudden death play-off.

COURSE: Opened for play in 2000, Pelican Waters was the first Greg Norman-designed golf course in the Sunshine Coast.

The work of Norman and then design partner Bob Harrison, Pelican Waters is a rather remarkable achievement given it was built on very flat land, and now features undulations as well as weaving lakes and other water hazards that come into play on most holes.

Last week’s winner and now world-record holder Andrew Martin will be brimming with confidence as he heads to the Sunshine Coast this week fresh off a maiden win that saw him rise to a career high spot on the world rankings.

A victory hangover is a fair concern this week for the Victorian, but having closed The Players Series at Bonnie Doon with a 61, it will be interesting to see how Martin follows it up. Elvis Smylie is seemingly among the list of names to watch each and every week, but it is with good reason. The local finished in third on his own in his first ever start as a professional last week at Bonnie Doon and will be well and truly familiar with this layout.

RIGHT: Anthony Quayle won his first professional event at Pelican Waters in 2020 and will look to defend the title this week. PHOTO: Golf Australia.

Smylie shared 24th here last year as an amateur, and as many of the people on the ground at The Players Series last week noted, he has a certain star quality about him and seems closer to winning a four-round tournament each time he tees it up.

Jordan Zunic claimed the T.B. Hunter trophy in 2018 at Brisbane Golf Club and will be keen to add a second Queensland Open title to his resume having missed a chance to earn a win at his former home club last week.

Zunic was in the final group at Bonnie Doon and sitting two back with two three to play failed to find any birdies coming home to run down the fast finishing Martin.

Among the most surprising aspects of last week was Steph Kyriacou’s second-round 80 having taken the lead on her own on Thursday with a blistering eight-under 63.

Contending will be tougher this week due to all competitors playing from the same tees rather than a scaled course for the women as was the case last week. And while taking home the trophy with this distance disadvantage will be a big ask, it will be interesting to watch how one of the rising stars of Australian golf bounces back from the extreme highs and lows of her previous event. 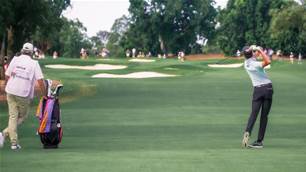 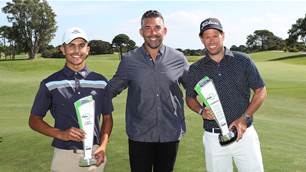