The PGA Tour of Australasia is coming to the end of its Order of Merit season, with the race for DP World Tour cards and more still very much alive.

As the circuit begins a fortnight in Western Australasia, Jed Morgan all but has the top spot locked up, with many of the contenders for the riches of finishing high on the money list in Kalgoorlie for the CKB WA PGA Championship presented by TX Civil & Logistics.

Returning after a nearly two year absence due to travel restrictions, there is a host of potential winners in the West ready to take on the uniquely Australian desert golf test in the mining hub.

DEFENDING CHAMPION: Local West Australian and in form player in 2022, Jarryd Felton, claimed the title in 2020 when this event was last played. Felton avenging his 2019 runner-up finish when he had a golden chance to claim his state PGA Championship.

Felton equalled the course record that he shares with Min Woo Lee and Michael Long, among others, his eight-under 64 giving him a one shot win over multiple time European Tour winner Brett Rumford, having started the day one shot back of Rumford and Braden Becker. 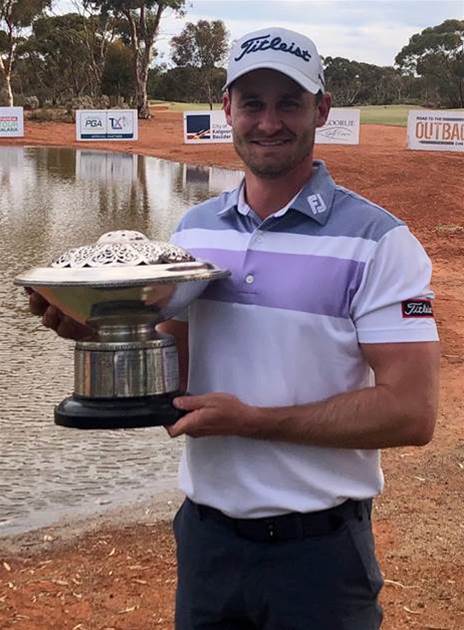 Felton’s win came over 54 holes and in October with a local field due to Covid, his 13-under total similar to other winning totals in previous years in relation to par.

RIGHT: Jarryd Felton poses with the trophy in 2020 after claiming a home state win. PHOTO: PGA of Australia.

COURSE: Kalgoorlie Golf Course is something unique in the Australian golfing landscape and a venue thoroughly enjoyed by the field each year at the WA PGA since it took over as host in 2012.

Opened for play in 2010, the course was designed by Australian legend Graham Marsh, who himself was born in Kalgoorlie, and features beautifully manicured playing surfaces surrounded by the red dirt of the outback.

Spotted with plenty of Marsh’s trademark expansive bunkering, native salmon gums and saltbush and various desert flowers, the site of the course was once used as a rubbish dump that the PGA Tour winner moved plenty of earth to create some undulation.

Ranked No.66 in the country by Golf Australia magazine in our Top-100 Courses Ranking for 2022, the course stretches to 6,768 from the back markers, with the length negated somewhat by the firm and fast wintergreen couch fairways and G2 bentgrass greens.

Scoring can be low at times during this event, but there is plenty of lurking danger, including at the par-3 8th sitting on the highest point of the property which can be maxed out at 202 metres. The 17th is also a one shotter measuring over 200 metres, while the 538 metre par-5 18th means no player will be comfortable even with a decent lead until their ball finds the bottom of the cup on Sunday.

PLAYERS TO WATCH: With three events left before the 14 tournament season is in the record books, Jed Morgan will be keen to continue building on some recent good signs as he prepares to accept a DP World Tour card.

After his remarkable win at the Fortinet Australian PGA, the Queenslander failed to cash a cheque in his next four events, however a T8 at Cypress Lakes and a T12 at The National in his last start show signs that his best isn’t far away. And the Graham Marsh layout should suit Morgan’s game.

Blake Windred is the only player with a mathematical chance to take over from Morgan at the top of the Order of Merit, but it is fair to say the New South Welshman will just be focused on his own game that has been in top shape of late. Order of Merit leader Jed Morgan has shown some good signs of late and is a likely contender this week. PHOTO: Andy Cheung/Getty Images.

Runner-up in his last two starts, Windred won the first event of the season in late 2021 and he finished inside the top-10 in his only previous visit to Kalgoorlie.

Dimi Papadatos, Aaron Pike and Louis Dobbelaar are all within reach of the all important top-3 on the money list and all that comes with it, and the trio are all in good form.

Papadatos did miss the cut at The National PGA Classic, but that can be forgiven after five straight top-20s, including a second career win at the Vic Open in February. The Magenta Shores Touring pro is also a prior winner in Kalgoorlie, so expect him to be right in the mix again this week.

Pike is also a winner this year, at TPS Hunter Valley, and although he has been somewhat rocks and diamonds at times this season, he was runner-up at this event and venue in 2016 and will be getting his game ready to go back home to the Northern Territory in a couple of weeks to defend another title.

After a great start to the year, Dobbelaar has missed the same number of cuts as he has made following the Queensland swing, but when he is at his best looks to be a fantastic prospect for the future. Powerful off the tee and a good game manager, the former Australian Amateur winner feels like he is just around the corner from a first pro win.

Also a likely contender this week, the defending champion Felton won recently at Bonnie Doon and was T3 at the NSW Open.

Runner-up in 2019 here, Felton is back playing at an extremely high level after struggling during the pandemic and working in a pro shop. Another to miss the weekend at The National, Felton will be excited for another familiar venue next week for the WA Open but first will be focused on becoming the first back-to-back winner of the WA PGA since his namesake Kim Felton won his hat-trick of titles in the early 2000s.