Reactions to the effective ban of the long putter expose a deep problem in golf.

1. Banning ‘anchoring’, or fixing some part of a golf club (in almost all cases an extra-length putter) to a part of the player’s body other than the hands, is consistent with the spirit of the game. It also has to be noted that there is no proof that using a long putter gives a golfer an advantage over one who does not, and has been part of golf for more than three decades now.

2. There is a growing concern that golf has lost control of regulating equipment, and it has had a negative impact on the length of courses, the time it takes to play and the cost of the game. On the other hand, many of these issues have nothing to do specifically with the long putter, and are more about the ball and large-headed drivers.

3. Golf is hard, and growth in participation is languishing. Banning the long putter will make the game harder for some people. Counter: golf has always been hard, and people deciding whether they want to play or not won’t be swayed by whether they can use a long putter or not.

Roll those three propositions together, and sprinkle in the self-interest of rules-making technocrats, touring professionals and the equipment manufacturers, and you have an idea of the back-and-forth over the proposed ban to the putting method which, it should never be forgotten, ended Australia’s drought at the Masters last April. Each side claims they have the game’s best interests at heart, but no one can really be believed.

Anchoring is really a small issue, but this debate is an opportunity for golf to ask itself a big question: how important is it that all golfers play by one set of rules? Why is it that a Major championship and the Thursday club comp have to follow the same rule book? The simple solution here would be to create one rule for the elite, another for the hackers. Golf people see a lot of romance in the single set of golf rules, but it’s approaching the point where it’s become a vanity. 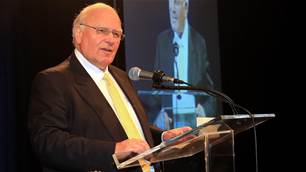