Minor tweaks to his long game – and his blossoming mullet haircut – are on the cards as Cameron Smith prepares to defend his Sony Open crown in Hawaii this week.

The Australian World No.29 won his first individual PGA title on the island last year before a tie for second at the delayed Masters in November.

Returning to Hawaii with flowing locks that are turning heads, Smith is comfortable carrying his new status as a defending champion.

"I've putted really well ... if I can get my longer stuff, and especially my irons into a good spot, I'll be able to compete every week," he said ahead of Friday's first round at the Waialae Country Club in Honolulu.

"I just need to hit it closer, basically ... so just little steps. Hopefully it all falls into place very soon."

The same goes for his haircut, which the Brisbane local and mad Broncos fan says was inspired by those he'd seen in the NRL.

"I've almost turned it into my good luck charm ... I'd really like to go full business at the front and party at the back." – Cameron Smith

"(It was) just something fun (to) make people have a laugh and I've just kind of kept it going," he said.

"I've almost turned it into my good luck charm ... it needs a little bit of a trim at the front.

"I'd really like to go full business at the front and party at the back."

Australians will hope that luck extends until July, when Smith and compatriot Adam Scott could wear green and gold at Tokyo's delayed Olympic Games.

Smith too said the Olympics had drifted off his radar but that he was keen to feature.

"Everything's just been so up and down the last year or so but it was definitely one of my goals last year," he said.

"It's still one of my goals, I'd love to be there, I'd love to represent Australia so hopefully we get the go-ahead and we can get over there." 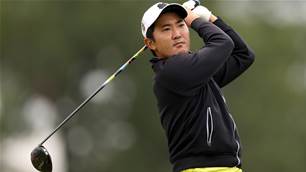 Kanaya plans to ‘go for it’ at Sony Open