Cameron Smith has shown just why he was named Australia's best-performed golfer of the past year as he somehow managed to win his round-robin opener at the World Golf Championships Match Play.

Two down with only three holes to play against Lanto Griffin, Smith held his nerve as the American imploded to conceded the match 1-up at Austin Country Club.

World No.27 Smith made birdie at the par-5 16th to pile on the pressure before Griffin conceded after finding a terrible lie in a greenside bunker and then flubbed two chips on the 18th to gift the Queenslander an unexpected win.

Unfortunately it was Australia's only success on the opening day of the WGC event, with Jason Day and Marc Leishman defeated.

Day was never in front in his match against Scottie Scheffler, bogeying two of the last three holes to lose 2 down.

Hours before his win in Texas, Smith was named the Greg Norman Medal winner – edging out his Presidents Cup teammate Adam Scott and women's ace Minjee Lee for the honour.

Next up for Smith in Austin is match play beast Ian Poulter, who flogged Rory McIlroy 6 & 5.

It is the earliest McIlroy has walked off the course in 10 years at the Match Play – when he lost 8 & 7 to Ben Crane at Dove Mountain in Arizona.

"I wanted to keep the foot down because it's too easy to let him back in the game." – Ian Poulter

Poulter never lost the lead after a six-foot birdie putt on the opening hole, while McIlroy's day was summed up when he hit his tee shot on the 5th hole into a swimming pool.

Poulter said the score only made it look like an easy day of work, after leading 1-up going to the 9th.

"I wanted to keep the foot down because it's too easy to let him back in the game like he did, and then he takes control of the match," he said.

McIlroy wasn't the only favourite to come unstuck in Texas with World No.2 Justin Thomas and US Open champion Bryson DeChambeau suffering shock losses.

Veteran Matt Kuchar built a 5-up lead over Thomas and held on to win 3 & 2.

The biggest stunner belonged to Antoine Rozner of France, who only got into this event two weeks ago when he made a 60-foot birdie putt on the last hole of the Qatar Masters.

He made his WGC debut with a great flop shot over the trees on the 18th hole that led to a 2-up victory over fifth-ranked DeChambeau.

Among the winners of the 32 matches on Wednesday were World No.1 Dustin Johnson and World No.3 Jon Rahm and the resurgent Jordan Spieth.

Another day of 32 matches awaits on Thursday and Friday, and the winners of each 16 groups advance to the knockout stage on the weekend. 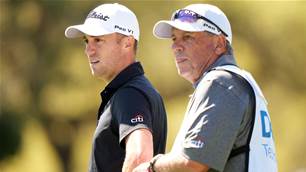 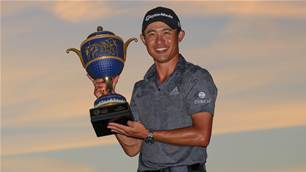