The Australian World Cup partners delivered the head-to-head battle promoters were hoping for, trading blows and thrilling fans during an 18-hole bout in the Sunshine State.

Smith, 25, began the final round with a three-shot buffer on Leishman. But it was short lived …

The big Victorian bolted out of the gates and birdied the 3rd, 4th and 5th holes to snatch the lead from Smith, who bogied the 1st and 4th.

“I was expecting Leish to come out and give it a good crack today … I knew he was going to do it, he's too good of a player not to do it," said Smith, who becomes the first player to successfully defend the Aussie PGA since Robert Allenby (2000/01).

“I didn’t really have the greatest start … But my family and friends and everybody were still behind me, egging me on.

“Pinners (Smith’s caddie) is always so positive, no matter if we’re two over through five, or two under through five, he just says ‘let’s keep going’. He really kept me in there today.”

The Queenslander was quick to respond with birdie at the 6th. But Leishman struck another blow with his 2-iron at the short par-4 8th to grab a two-shot advantage by the turn.

The duo then exchanged birdies at the par-5 12th after Smith made the bold decision to use his driver off the deck.

“Leish was a couple ahead at that point and I thought we needed to make a big move,” Smith said. “I hit a good shot – just left of the green – and put a bit of pressure on Leish and he still made birdie … That’s just the type of player he is, he’s just so good.”

Smith made it successive birdies when he drained a lengthy putt at the 13th hole and watched as Leishman settled for par.

The defending champion then drew level with Leishman after the 35-year-old bogied the par-3 14th – and then he caught two lucky breaks at the following hole, after his tee shot narrowly missed the water hazard.

“The drive hit the grate and then we were over in the left rough,” Smith said.

“I just needed to miss it right of that green for that pin and hit it a little bit too far right … Hit the (advertising) board and it was the obstruction rule.”

The Wantima Country Club product utilised local rules – which allowed him to drop either side of the board – and was rewarded with a good line into the 15th green from the 16th tee box.

“Leish was in there with a good shot at birdie, so I basically just wanted to get it inside him.”

Leishman proceeded to narrowly miss his birdie putt before Smith converted from four feet to snatch the outright lead.

The knockout blow was delivered 10 minutes later at the party-hole 16th when Leishman missed the green and two-putted for bogey, allowing Smith to par his way into the clubhouse and retain the Joe Kirkwood Cup. Leishman, who was looking to win his first big tournament on home soil, was gracious in defeat after his 14-under-par, 274.

“I’m definitely disappointed at the moment, but you're always happy for Cam, we had a good fight out there,” said the World No.21.

“I was expecting Leish to come out and give it a good crack today … I knew he was going to do it, he's too good of a player not to do it.” – Cameron Smith

The 36-year-old was the final player to make the cut on Friday night and played alone on Saturday morning.

McGowan, ranked 686th in the Official World Golf Ranking, was blemish-free in his final round and fired four-straight birdies from the 10th hole.

“I feel like a beer … But I'm not sure that's going to be the route to go just yet,” said McGowan, who was suggesting the 30-kilometre gusts might throw a spanner in the works. Two hours passed before Matt Millar (68) also signed for an 11-under tournament total – and he looked as though he might steal Order of Merit honours from Queenslander Jake McLeod.

RIGHT: McLeod won the 2018 Order of Merit on the PGA Tour of Australasia. Albert Perez/Getty Images.

But the Canberran – who eventually shared third place with McGowan – fell short as 24-year-old McLeod (74) finished T19th to top the Australasian money list for 2018 and secure playing rights on the European Tour.

“A few tournaments ago I didn't even think about it … (Europe’s) where I've wanted to play for a couple of years now, so it's nice to finally get there this way.” 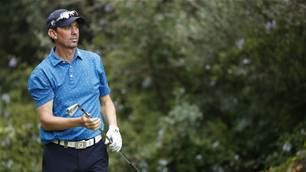