Not only was the former Australian and New Zealand Amateur winner upset with his bogey-five at the last, Jager also expressed disappointment at a lack of attention for his group despite leading the tournament after the opening round.

Jager’s round of 66 on day one of the Australian PGA Championship had him sharing the lead with Jake McLeod and after the West Australian recovered from a bogey at the par-3 2nd on Friday to make the turn in one-under-par, he was right in the tournament alongside main tournament drawcards Cameron Smith and Marc Leishman.

But playing in one of the later groups of the day, and with the television coverage finishing early due to Queensland’s lack of daylight savings, Jager and playing partners Dale Brandt-Richards and Alexander Knappe had few followers out on course and played in relative anonymity ... Jager bemoaning he and other young players’ chances to put their abilities on display when playing well in our country’s major events.

“Oh, absolutely,” Jager said of trying to use this week and other big Australian events to show his skills.

“You know, it was just obviously we're late in the field. Still playing some good golf. It's a bit of commotion and whatnot, there's not many people around, so you've just got to stay in your moment, your zone and see what you can do. We're right there, so it's good.”

Having relied on his short game to keep his round going throughout a tough back nine, Jager arrived at the final hole at eight-under par, with designs on a potential birdie and share of the lead to ensure his name would be up in lights as he attempts to earn more status to play around the world.

But the Victorian-based World No.1,291 drew a difficult lie in the right rough that did nothing to improve his mood.

"You know, it was just obviously we're late in the field. Still playing some good golf. It's a bit of commotion and whatnot, there's not many people around ..."

“Just in the rough, and obviously back was ... like long was the only place I couldn't go,” Jager said of his approach shot into 18 that came up short. “So I had my chance to make four and didn't hit the chip close enough.

"My short game was what saved me all day. I didn't hit the ball great, worked hard and grinded when I needed to just to give myself a chance going into the weekend.”

Jager was similarly in the mix at the Australian Open two weeks ago before a disappointing weekend dropped him back to an eventual tie for 28th.

But with the added incentive of proving a point this week that lesser known players high on leaderboards deserve coverage, Jager headed for the practice range in near darkness at Royal Pines to remove some frustration and set about gaining more attention on Saturday and Sunday in Queensland.

“I'm just going to go to the range now and get loose and just work on a couple little things and then … because I hit it really well yesterday, so I know it's there,” Jager said.

“It was just probably a bit of a rhythm thing. So (I'll) go and work on that and come out tomorrow and give it a crack, see what happens.

“Still only a couple back, right there. You know, if I can just match a bit of the putting and the ball-striking over the weekend, then I'll be right there.” 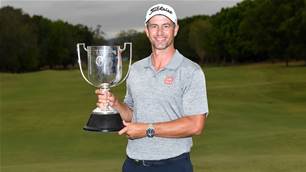