Not many of the 156 golfers gathered at Shinnecock Hills for the 118th US Open will remember the opening day with much affection.

Certainly, none of the nine Australians in the field were doing much smiling in the immediate aftermath of their first official circuits of the Long Island course. A cumulative 71-over-par and so averaging almost exactly 78 (two more than the whole field managed) the men from Down Under typified the struggles endured by most.

Best of the nine were Marc Leishman and Aaron Baddeley. Both shot four-over par 74s. Matt Jones got round in 76. Jason Scrivener could do no better than 78, one shot lower than Adam Scott, David Brandon and Jason Day. Lucas Herbert was most disappointed though. The 23-year old Victorian accumulated a total of 84 blows. 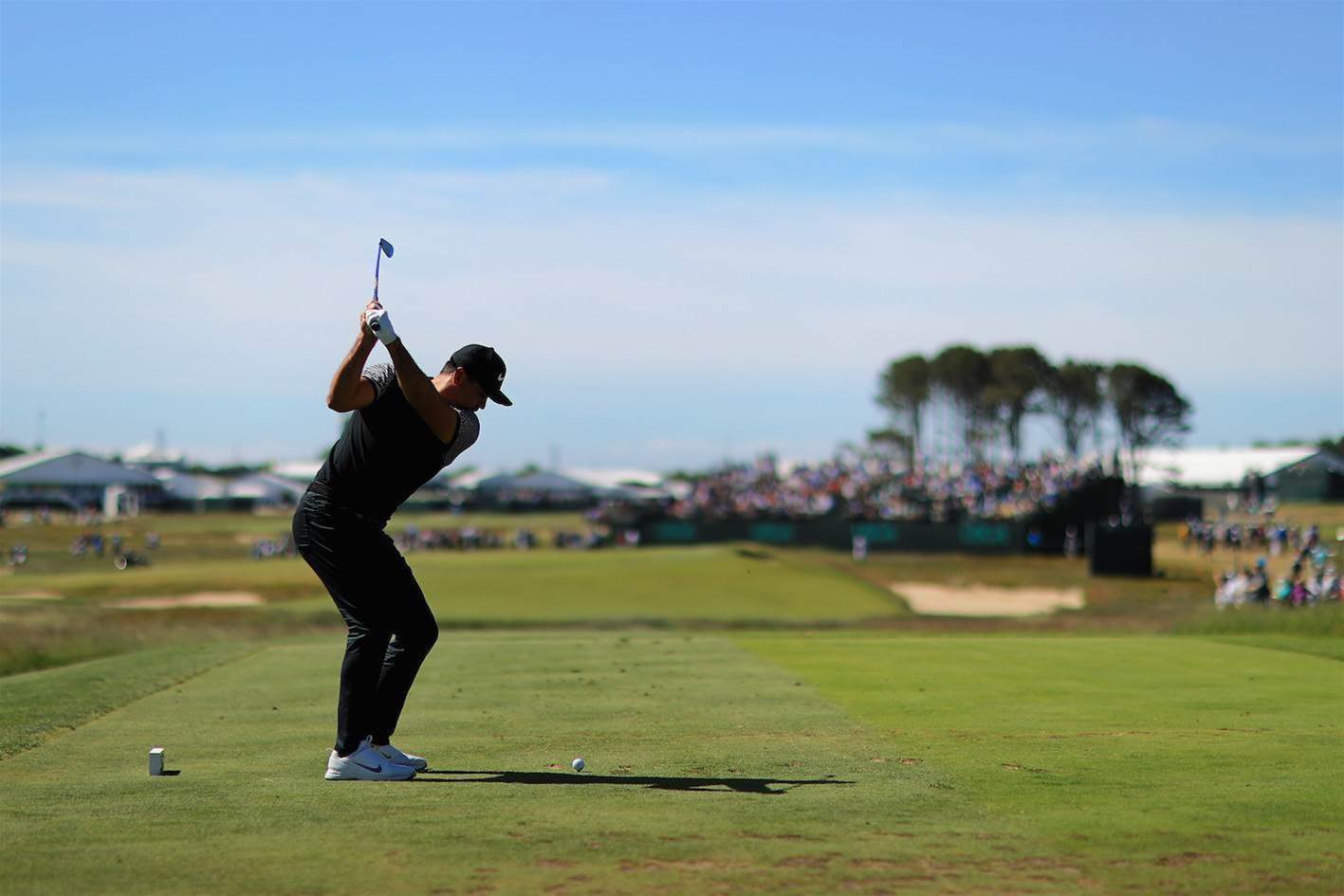 Jason Day criticised the USGA for its pin positioning after shooting a nine over 79. PHOTO: Getty Images.

Day’s 79, of course, represented both the biggest surprise and disappointment. The former USPGA champion, twice a winner on the PGA Tour this year, arrived with high hopes of clinching a second major title. But his was an erratic display – he hit only seven of 14 fairways – in the breezy morning conditions. Eight bogeys and a double-bogey dotted his card, easily outmatching his lone birdie at the par-5 16th.

It wasn’t just the wind though. Day also cited the USGA’s choice of pin positions as contributors to the difficulty.

“At least some of the pins were on the greens,” he said with more than a hint of sarcasm. “It’s hard enough. We’ve got at least 20 miles an hour of wind. Shinnecock is hard. If you’re not quite there, you don’t hit enough fairways. You’ve got to hit fairways first. I didn’t do that and that’s why I played bad.” Ian Poulter was one of only four players to break par. PHOTO: Getty Images.

Elsewhere, only four players – Ian Poulter, Scott Piercy, Russell Henley and, ominously for those with aspirations of ultimate victory, World No.1 Dustin Johnson – broke the par of 70. All four shot 69.

“Patience is everything,” was Poulter’s verdict, one unanimously shared by those alongside him on the leaderboard. “Yes, the second shots involve a lot of guesswork. But I enjoyed everything about the round. And I know we have three stressful days to come.”

Johnson, as ever, was more laconic. The 2016 champion at Oakmont is nothing if not laid back. But he clearly relished the examination paper presented to him.

“I love going out there and playing in these conditions,” he shrugged, without even the hint of a smile. “You have to hit a lot of different shots. And that takes a lot of skill.” Aaron Baddeley led the field early in his round but ultimately carded a four over 74. PHOTO: Getty Images.

Less naturally gifted, Poulter was right to dampen his enthusiasm though. This was, after a couple of recent blips, a return to the US Opens of old. Eliminating almost any semblance of imagination and flair, the war of attrition, so beloved of those who enjoy watching even the best struggle mightily, was back. And toil they did. By way of example, the top-ten players on the world ranking finished a cumulative 51-over-par.

A selection: Rory McIlroy shot 80. Jordan Spieth – four-over par after only two holes – could only manage a 78, the same as Tiger Woods (who started with a triple-bogey seven, added two double-bogeys and never really got going) and Jon Rahm and Phil Mickelson with 77, a score duplicated by two-time Masters champion Bubba Watson. Worst of all was former (British) A As former BMW PGA champion Tony Johnstone said on Twitter: “Playing in the US Open is like sitting in the dentist’s chair waiting to have molars pulled. Then realising that the dentist is blind.”

Golf Australia columnist Mike Clayton was also less than enthused by what he was watching on television.

“Hard, fast, brutally difficult greens to defend great old courses is the ultimate manifestation of the madness that is the ridiculous distances the modern ball flies,” was the scathing verdict of the former European Tour pro and prominent course designer. It wasn’t all doom and gloom though. Englishman Paul Waring shot 78 and was cheerfully philosophical about his less than stellar debut in the year’s second major: “I think the official term is… I’ve just been US Opened!!”

And there were others who at least claimed to relish the Shinnecock experience. Asked for three adjectives to describe his opening effort of 71 – a score matched by former Open champion Henrik Stenson – 2013 winner Justin Rose answered with impressive promptness: “Perseverance. Commitment. Discipline.”

So there you go boys. It’s easy when you know how.