Adam Scott already has spent seven days at Royal Portrush, three of them with Darren Clarke, and the advice was invaluable to the end.

The pair stood off the 18th green Sunday as Scott listened intently to an Open champion whose game was forged on these links.

How the course plays in different wind directions?

Whether it's worth hitting driver down the steep hill on the 17th?

No, this was where to spend the next few days away from the course, with the Bushmills Distillery the leading option.

What he saw was better than he imagined.

Royal Portrush hasn't hosted golf's oldest championship since 1951 and has a mystique except for the few who know it well.

Clarke is on that list, having made Portrush his adopted home. Graeme McDowell is the only player who was raised in Portrush. Rory McIlroy is famous for the course record he set (61) at the North of Ireland Amateur when he was 16.

It's not unusual for Scott to show up at the Open a full week ahead of time, as he did at Carnoustie a year ago.

"I was a bit surprised, my first look, at how demanding a golf course it is," Scott said.

"Sometimes on a links you can get away with wide shots. Here, you don't. It's so penal off the tee, no matter what you hit.

"If you start spraying it, there's going to be reloading a lot. If the wind doesn't blow, there will be less of that. It is a very, very strong golf course."

Scott said Clarke gave him more than he could have wanted.

He asked for a practice round, just to see how Clarke approached these links, and wound up playing three times with him.

"He's gone out of his way to spend way too much time with me," Scott said.

"I love watching how he plays the links he grew up on, to see what he thinks and how he navigates.

"He's been incredibly helpful. It's nice to have a good level of comfort to go play the tournament." 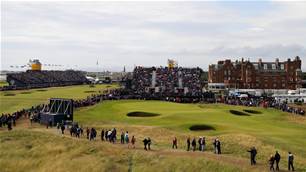