Adam Scott says the Players Championship may not be a major but he is still hungry to become just the second Australian to win twice at TPC Sawgrass.

Debate rages every year whether the Players – whose 144-player field is the strongest in world golf – can finally shed its tag as the unofficial fifth major.

Scott, the 2004 winner at TPC Sawgrass, doubts that is happening any time soon. But the former World No.1 did deem the Players the "biggest event on the PGA Tour" which now boasts a $US15 million prize pool, the richest in golf.

"It's not a major but it ranks pretty highly," Scott told AAP on Wednesday.

"It's huge, isn't it? It's the biggest event on Tour and I think it'd be very special to have a couple of these trophies."

World No.9 Scott believes this edition is his best chance in several years to lift the Players trophy for a second time, given his recent victory at the Genesis Invitational at Riviera Country Club capped a return to form.

"Winning recently has me confident, but I generally have a good record around here," said Scott, whose 2004 win is among four top-10s at TPC Sawgrass.

"I've played some solid golf but this year I'm probably a little more prepared to put four good rounds together."

Scott will play the opening rounds this year with stars Justin Rose and Xander Schauffele.

Scott's average driving distance of 310.3 yards (283.7m) is ranked within the top-20 on the US Tour. He says the Players reverting to a March date, following a 12-year stint being held in May, favoured longer hitters like himself.

"It doesn't drastically change the golf course, but it's better for a few guys off the tee," Scott said.

"You're asked to hit more club off the tee, compared to when it's firm in warmer May weather, and that favours guys who have strong tee games. But you still have to be accurate."

Scott is joined in the field by countrymen Day, who is under an injury cloud, as well as Marc Leishman, Cameron Smith, Aaron Baddeley and Matt Jones. 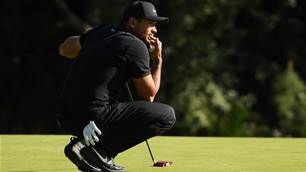