If possible, the second day of the Sandbelt Invitational not only lived up to day one at Kingston Heath, but exceeded it thanks to crowds beyond the club membership on site at Royal Melbourne.

The No.1 course in the country, the West Course, was the star of the show as young players and veterans alike battled increasing winds and firm and fast conditions. West Australian Brady Watt eventually finishing the day at five-under-par leading by two from Marcus Fraser.

Watt’s round of 70 officially goes down as level par, however with two par-5s playing as par-4s, the former World No.1 Amateur certainly felt like he had got the better of Dr. Alister MacKenzie’s famed layout.

“70 in my mind because it’s a par 72 but there was a couple of par-4s that played really strong … like 15 today was a strong 4 today,” Watt told Golf Australia magazine. 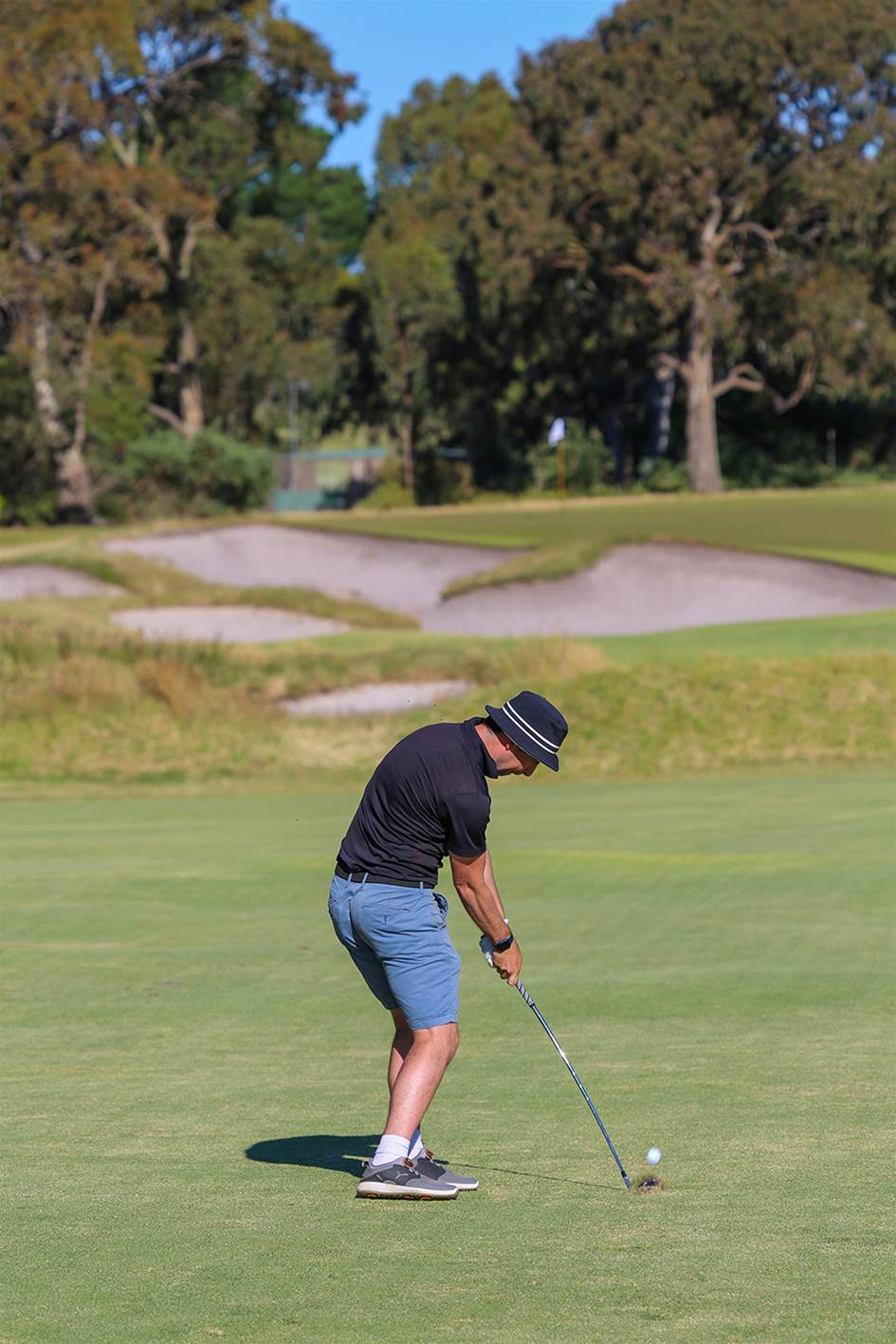 “It’s just a grind. Once that wind picked up it was just incredible when the ball started bouncing.”

RIGHT: Brady Watt strikes his 9-iron at the 15th that nearly found the hole and an eagle on the par-5. PHOTO: Brendan James.

Despite his mention of the difficulty of the 15th hole, it certainly didn’t appear as if the 31-year-old struggled for those of us lucky enough to watch Watt play the hole in one of the far corners of the Royal Melbourne property.

With around 150 metres left to the pin tucked on the far-left corner of the putting surface, Watt pulled a 9-iron that rode the right-to-left wind and nearly found the bottom of the hole for an eagle that the leader said he would count as an albatross to his name.

“It was one of the best 9-irons I’ve hit in a long time. Riding it on the breeze, it was nice to roll that one in,” he said of the eventual birdie that helped Watt manage a two-over back nine.

Recording one of only two under par rounds on Tuesday, the other belonging to Lucas Herbert, Fraser used his experience and nous to compile a 68 he felt could have been far better.

“It’s been fun because I can hit a lot more different shots … normally I just hit driver everywhere but I’m shaping irons off the tees ... The shot shaping you can do on these courses it’s awesome.” - Brady Watt.

“Made a good up-and-down on 6, missed another chance on 7 and also 8, had an unplayable on 11 or 12 so it was sort of one of those ones where it felt like two-under was about as bad as it could have been.”

With two rounds to play, tomorrow at Yarra Yarra then Thursday at his home club of Peninsula Kingswood, the Victorian is a serious contender for the inaugural title of the Mike Clayton and Geoff Ogilvy run event. Despite spending most of his time teaching others the game these days having returned home from a long career on the Asian and European Tours. 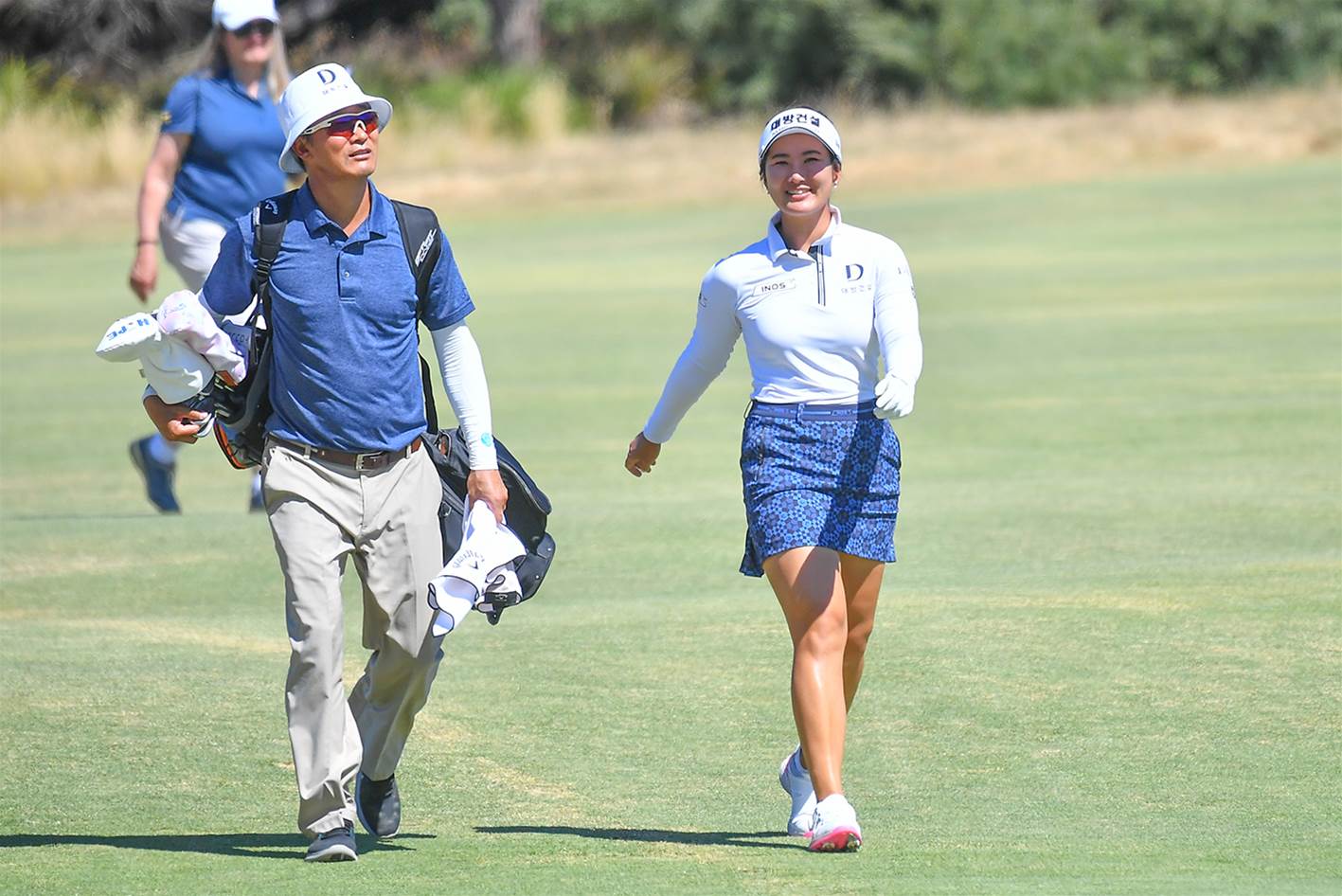 Su Oh, who battled to a three-over round was another of the players who clearly enjoyed herself at Royal Melbourne. PHOTO: Paul Shire.

“It’s just such a treat to play these golf courses set up in these tournament conditions,” he said. “I’m a bit of a golf tragic so it’s pretty special to be able to come and play these courses set up like this.

“I think its (Peninsula Kingswood) gaining a lot of momentum around the world so it’s nice for it to be up against these courses in a tournament. I think it’s going to add a little bit more to it because its starting to get a lot of momentum.

“I know the course really well but it’s like these golf courses. Unless you play it properly, you’re not going to shoot a score. They are the best greens I’ve ever putted on, anywhere in the world, so it’s going to be pretty cool playing the last round at PK, my home club, that’s for sure.”

The only other player under par for the tournament is Matias Sanchez, who matched Watt’s round of 70 despite bogeys at 15, 16 and 17 to sit at one-under, with Grace Kim, Jediah Morgan and Jordan Zunich a shot further back.

Zunic’s dinner will be a little less enjoyable than it might have after reaching four-under early in his back nine before closing with four bogeys in his final five holes. The New South Welshman signing for a hat-trick of birdies to close the day.

“It’s just such a treat to play these golf courses set up in these tournament conditions,” he said. “I’m a bit of a golf tragic so it’s pretty special to be able to come and play these courses set up like this." - Marcus Fraser.

Runner-up last week at the Gippsland Super 6, Zunic was certainly not disheartened about his chances, with every player in the field aware that patience is the key around the Sandbelt.

“Played solid for most of the round and then the finish is just pretty brutal if you don’t hit the right shots,” Zunic said. “That southerly was picking up towards the end, too.

“Overall pretty happy with the way I played. I made some good birdies early which is always nice because then if you do have a bit of trouble later on at least you’ve made those early ones.”

Fraser, who spent extra time on the putting green before today’s round to acclimatise himself with different putting surfaces echoing Zunic’s words of remaining level headed and calm despite the difficulty of the courses, conditions and “Sunday pins” that each layout has dished out thus far.

“I reckon it’s just great fun. Playing these golf courses in these conditions is awesome,” the three-time European Tour winner said. “You know when you bite off a little bit too much you some unstuck pretty quickly.

“It’s the old story: you’ve just got to be patient. Sometimes 20 metres or 30 feet for birdie is a really good result.”

Obviously, as the halfway leader, Watt is enjoying the challenge put forward each day. But as a keen student of the game, and a player who exemplifies exactly what the Sandbelt Invitational is about, it is easy to imagine Watt would be equally enjoying himself if he found himself at the other end of the field.

He isn’t though and relishing the challenge might be the key to the next two days and perhaps a first four round professional win.

“They’re trying to protect par which is amazing because you don’t get many events like that. So middle of the green, take your two putts and get out of there … make a couple of birdies and move on,” Watt said.

“It’s been fun because I can hit a lot more different shots … normally I just hit driver everywhere but I’m shaping irons off the tees and bringing back the ‘stinger’ or whatever its called where you run it down the fairway. The shot shaping you can do on these courses it’s awesome.”

And Watt perfectly surmised exactly what the feeling has been from everyone who has had contact with the Sandbelt Invitational so far with his final thought of the day before enjoying a beer on the grass out the font of the palatial clubhouse.

“Any day you can play Royal Melbourne, it’s a good day.”

Birdies and bucket hats, the recipe for Brady’s Sandbelt success