The design team of Peter Thomson and Ross Perrett have successfully turned grazing land north of Melbourne into an enjoyable course that challenges players of all abilities. 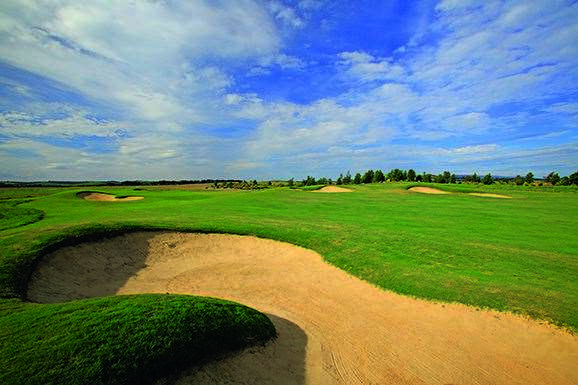 The short par-4 5th hole calls for a blind shot to be played to a green just beyond the crest of a hill.

The firm evolved into Thomson and Wolveridge, with Ross Perrett joining the business in 1990. Wolveridge retired more than a decade ago and the name Thomson Perrett has carried on.

Today, Thomson Perrett has offices in Melbourne, London, Shanghai and Hanoi, while their portfolio of design projects has surpassed 250 in more than 30 countries. Thomson Perrett’s newest creation here in Australia is Club Mandalay, which hosted its first golfers in mid-2014 and was officially opened in July this year

The par-72 is also the latest addition to the golf landscape north of Melbourne. Located just west of the Hume Freeway at Beveridge, about 45 minutes’ drive north of the city, Club Mandalay is in the same neighbourhood as the Graham Marsh-designed Growling Frog, a short drive south at Yan Yean, and Hidden Valley, just 20 minutes’ drive north in Wallan.

Club Mandalay is the hub of a major 2,000-lot residential development that is part of the fast-growing northern corridor out of Melbourne. 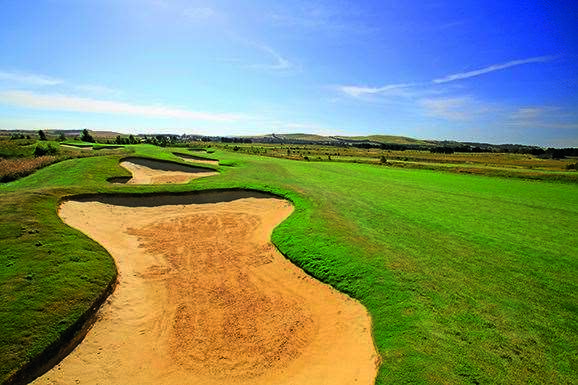 A long row of bunkers
line the left side of the 10th fairway.

As one might expect in this predominantly rural environment, the 6,285-metre links-style layout covers what was grazing land and offers sweeping plains views towards ranges in the distance.

The gently undulating site offers only a few significant elevation changes, which you encounter on two par-3s and the final hole back to the clubhouse.

Tonnes of rock, just beneath the grassy fields, had to be removed during construction. But such matters were not new to the Thomson Perrett design team, which has faced similar hurdles with other projects in this country, like Hamilton Island in Queensland, and major developments in China and the Middle East. Some of this rock was used to line a wide water catchment area that winds through the lowest point of the layout.

While the first golfers were sampling the course in early 2014, the layout can still be regarded as being in its infancy. But for such a young course, the large rolling greens are already very good to putt on. The shape and angled placement of many of the putting surfaces is a feature of the design as they place a real emphasis on being in good position to hit your approach shot up the length of a green, rather than hitting over bunkers. 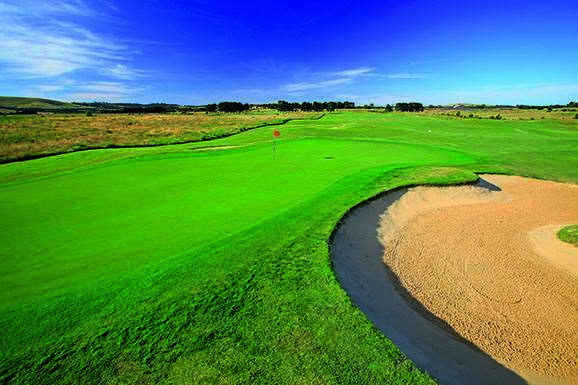 The angled green of the
par-5 17th hole is typical of many at Club Mandalay.

To that end, the fairways are generally wide and are usually flanked with vast areas of deep rough, which, despite being dry, is pretty tough to hit out of … if you find your ball. In the eight months between my first visit to Mandalay in February and my second round there in October, the first cut of rough had been widened on quite a few holes, making them more playable.

These wide fairways are punctuated by deep and visually intimidating bunkers that enter your consciousness each time you pull a club and walk onto the tee. Thomson Perrett have placed these sandy hazards where they encroach into the fairway and make you seriously contemplate your choice of driving club.

The 1st hole, a 327-metre par-4, is an ideal opener to get players away with a simple strategy – lay up to about 200 metres in the left half of the fairway, giving the fairway bunker to the right a wide berth and leave a short iron approach straight up the length of the angled green.

The two par-3s of the front nine – the 182-metre 3rd and the 164-metre 7th hole – play down and then back up the same gentle hill and are arguably the best of the one-shotters at Club Mandalay. From the slightly elevated 3rd tee, you can see enough of the huge putting surface to realise you had better have the right club in your hand as the green is far wider than it is deep. A deep bunker is cut into the front edge of the green, while a large mound lies just off the fringe through the back. If you’re right-handed and your shot shape is a fade, this hole was made for you.

The same could be said for the 7th hole, played uphill to a wide green with two bunkers covering the front right half of the putting surface. A tee shot that works into the centre of the green from the left is the best option here.

Other front nine highlights include the short par-4 5th and the 512-metre par-5 6th holes. At the 5th, the dogleg-right fairway lies across the crest of a hill and leaves you with a semi-blind wedge approach into the green. However, the best play might be to lay-up short of the bunkers on the right edge of the fairway and play a short iron straight over the sand to the narrow green. On the following hole, the emphasis, again, is on the final approach with a diagonally placed green – with a bunker short and another long – determining that the best line into any flag is from the left half of the fairway.

The massive final green at Club Mandalay is receptive to only the best approach shots.

The back nine heads west from the modern clubhouse and features holes that run to all cardinal points of the compass. This variety of direction is important when you consider the layout is quite open and exposed to the wind, which really adds to the challenge of making a good score here.

Closing out a round at Mandalay is a real challenge and starts with the 202-metre par-3 15th hole, where a shallow angled green awaits your long approach. It must be said here that this hole is a real brute from the back pegs but, as is the case on every hole, there are three teeing options so choose the one that best suits your game. With two bunkers short right and a third bunker through the back left of the green, the best approach shots need to have a left-to-right shape.

Twin par-5s at the 16th and 17th holes provide some chance of picking up a birdie, or a double-bogey, on the run home but it is likely you will remember the 18th hole most when you leave. The slightly uphill 391-metre par-4 is skirted by water down the left side from the tee and there is an imposing bunker cutting in from the right edge of the fairway. The best line here, as is the case on quite a few holes at Club Mandalay, is as close to the middle of the fairway as possible. With a bunker right and just one short and left, the large sloping green is wide and receptive to shots from anywhere on the fairway.

The course has matured beautifully during the past year with the couch fairways bedding down well to provide a great surface to hit off and the greens displaying a lovely cover of bentgrass. Given the $42 green fee for visiting golfers, Club Mandalay offers excellent value for money as the round is challenging as well as being a lot of fun.