US Open champion Bryson DeChambeau fired the lowest opening round of his PGA Tour career to grab the lead after the first round at the Shriners Hospitals for Children Open in Las Vegas.

DeChambeau, in his first start since his major breakthrough three weeks ago, birdied five consecutive holes over a sizzling stretch around the turn en route to a nine-under-par 62 at TPC Summerlin that left him with a one-stroke lead.

"It was a great day to play well," said DeChambeau, who won the event in 2018. "There's no wind out here for the most part and I feel like you can bomb it everywhere and get wedges close. And I was lucky to make a lot of putts."

World No.6 DeChambeau started on the back nine and was two under before he kicked into high gear at the par-4 15th, the start of an impressive run where only one of his five consecutive birdie putts was from outside five feet.

A seven-time winner on the PGA Tour, DeChambeau finished strong with tap-in birdies at the par-4 7th and par-5 9th holes.

Nipping at his heels were fellow Americans Austin Cook, Harold Varner III, Scott Harrington, Patrick Cantlay and Nate Lashley, all tied for second in a tightly packed field after each carding an eight-under-par 63.

"There's no wind out here for the most part and I feel like you can bomb it everywhere and get wedges close. And I was lucky to make a lot of putts." – Bryson DeChambeau

The five-man Australian contingent all made a solid start, each completing their round under par.

Cameron Davis was most impressive with his six-under 65 placing him firmly in contention.

Davis' round included five birdies, an eagle and a lone bogey to leave him tied 13th.

Matt Jones was next best with 67, his round including five birdies and a bogey.

Jason Day is a shot further behind at three under while Craig Hocknull (two under) and Cameron Smith (one under) also beat par.

Among the big names who went out early were World No.7 Webb Simpson (68) and US PGA Championship winner Collin Morikawa (69), the World No.5 and highest-ranked player in the field.

Defending champion Kevin Na finished the day four strokes back from the lead with a five-under-par 66 and Sergio Garcia, fresh off his triumph last week in Mississippi, carded a four-under-par 67. 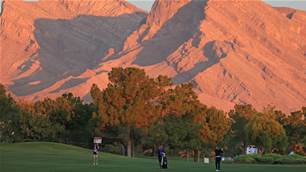 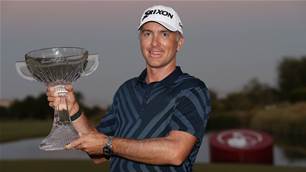