Collin Morikawa has been hailed as the latest wonder-youngster to emerge in golf after lifting the US PGA Championship on Sunday – leaving the last golden generation looking old in the tooth.

Northern Ireland's Rory McIlroy won four majors 2011 to 2014 but is now on a six-year drought at 31, an age where many would previously have considered that his best would still be to come.

Jordan Spieth then enjoyed a golden spell with three majors spanning 2015 to 2017 but has since tumbled down the rankings and is trying to rediscover his form aged 27.

"I think the game is getting better, younger," Spieth said before the start of the US PGA Championship at Harding Park, San Francisco.

He wondered if the closed door nature of the event due to the coronavirus would help ease the pressure but singled out – in America at least – the high level of college golf as a significant change in a game which previously required years of experience.

Morikawa, 23, is not flawless. He made headlines in June after all for losing a play-off by missing a metre-long putt.

But in just his second major tournament, he built a consistent foundation and finished a stunning six-under 64 to win by two shots.

"I think if I was scared from it, the last few holes would have been a little different, but you want to be in this position."

“I think the game is getting better, younger.” – Jordan Spieth

Morikawa chipped in at the 14th after an earlier lucky bounce but it was his decision to go for the green at the drivable par-4 16th, which brought a shot for the ages and set up the eagle which effectively won the tournament.

"I'm sure it was a split between hitting iron and going for it," he said. "Why not hit a great driver? Why not hit that little left-to-right shot with the wind helping off the left?

"I just needed that one bounce to go forward, and it did, and those are shots that you've got to take opportunities. That's what really separated me."

Morikawa was playing with Paul Casey, two decades his senior, and the Englishman who finished tied for second with Dustin Johnson said his playing partner's triumph was no surprise.

"Even if the media weren't talking ... that's where we were focusing our attention. And we weren't wrong."

Out of the 12 top-10 finishers, six are under 30 years old while there were four aged 25 or under including Matthew Wolff at just 21.

Justin Rose, the second eldest in the top 10 at 40, made his own prodigious breakthrough at the 1998 Open Championship as a 17-year-old. He is now described by the US PGA Championship website as a "grizzled veteran."

The next major of the rearranged coronavirus season is the US Open at Winged Foot, New York, September 17-20. The Masters is November 12-15 while the Open Championship was cancelled. 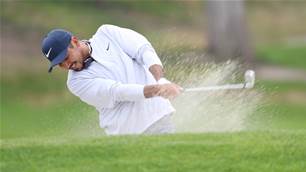 Day buoyed for majors after US PGA top five