Minjee Lee rocketed into contention at the Ladies European Tour's Dubai Moonlight Classic with a sparkling 65 leaving her two shots off the pace heading into the final round.

Lee is in a share of third at seven-under par, trailing leader Caroline Hedwall (70) of Sweden with England's Meghan MacLaren (67) sitting second.

World No.9 Lee – the highest-ranked player in the 56-woman field – scorched the Emirates Golf Club back nine with six birdies with her seven-under par round the equal-low score on Thursday.

The Perth ace will take advantage of her late tee time on Friday at the event which made history last year, when it became the world's first professional day-night golf tournament.

"I don't mind being inside until tomorrow's afternoon round because it is so hot out here and I'm just going to trust I've done enough practice last week before I came out here," Lee told ladieseuropeantour.com.

"There are a few shows on my Netflix that aren't available in America such as a few Korean dramas.

“I don't mind being inside until tomorrow's afternoon round because it is so hot out here and I'm just going to trust I've done enough practice last week before I came out here.” – Minjee Lee

"I felt like I watched all of the American shows while we were in lockdown the first time, so I am happy to see some new options."

Stephanie Kyriacou is next best of the Australian trio in 15th place at two-under after a second consecutive 71 while Whitney Hillier's 73 has her six-over.

MacLaren produced six birdies on Thursday, with a single bogey on the 7th hole preventing her from drawing level at the top of the leaderboard as she closed on eight under par.

Swede Hedwall, who produced a hole-in-one on the opening day, added a bogey-free round to Wednesday's effort of seven-under 65 to keep her nose in front.

"I have been playing very steady, hitting a lot of greens and I've been good within two metres of the hole," Hedwall said.

"Today I had a lot of putts that didn't drop so maybe five under would have been a fair score, but I'm in a good position for tomorrow and I'm happy with my game."

Germany's Laura Fuenfstueck (70) is tied with Lee while former World No.1 Lydia Ko (70, six-under) is among seven players within five shots of the lead. 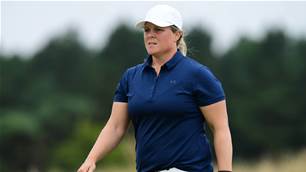 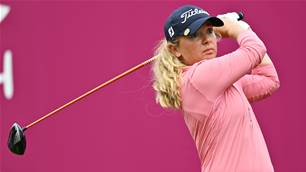 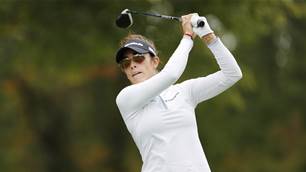