Minjee Lee has produced another of her ‘Sunday specials’ but the Australian's final round charge was not enough to earn her back-to-back major wins as Sweden's Anna Nordqvist took the Women's Open Championship at Carnoustie.

As the fearsome Scottish links showed its gentle side on a beautiful birdie-laden day in Angus, Australian Lee threatened to pull off another fantastic comeback win as she fired seven birdies in the day's best round, a six-under 66.

Eventually, though, it wasn't quite enough as she finished joint fifth, two shots behind Nordqvist, who kept her nerve best in a final-hole duel with Denmark's Nanna Koerstz Madsen to lift her third major title by a single shot at 12-under-par. Lee, the 25-year-old from Perth who'd won her maiden major at the Evian Championship four weeks ago by overturning a seven-stroke final day deficit, had threatened to do the same at Carnoustie from five down.

She took the tournament lead for the second time outright after she'd birdied the 16th with a 25-footer, with overnight leaders Nordqvist and Madsen still in the early stages of their rounds. Minjee Lee gets a good drive away on the final hole but messed up her approach shot. PHOTO: Getty Images.

Yet Lee made a mess of the last, even having got lucky with an extraordinary bounce in and out of the Barry Burn guarding the green, and ended with a bogey that left her on 10-under, a challenging clubhouse lead but not quite enough as her challengers found birdies plentiful behind her.

"I didn't really feel too much pressure, five shots off the lead, so I just tried to play as aggressively as I could," said Lee.

"I looked at the leaderboard on 10, and then I knew I was kind of close, so tried to make as many birdies as I can, and finished with six-under, so I'm pretty happy."

Forty-five minutes after her round finished, Lee was overhauled by England's former champ Georgia Hall, whose 67 put her a shot ahead, and then the stage came down to an all-Scandinavian duel between the final pair.

After Sweden's Madelene Sagstrom (68) and American Lizette Salas (69) had fallen short in joint-second with Hall, Nordqvist and Madsen teed off at 18 locked at 12 under. Nordqvist putts on the 18th green where a solid par ensured the title. PHOTO: Getty Images.

But the Dane found a greenside bunker and made double bogey after shanking out, leaving Nordqvist to make solid par to add to her 2009 LPGA and 2017 Evian wins.

Steph Kyriacou, Sydney's impressive 20-year-old rookie of the year on the Ladies European Tour, also had a brilliant last day adventure, briefly even sharing a place atop the leaderboard after an eagle at the 12th to go with four earlier birdies.

Her amazing run ended with a bogey at the long 14th and, cruelly, her tee shot at the last flew out of bounds as she finished with a double bogey that left her recording a 69 that left in joint-13th place at six under. 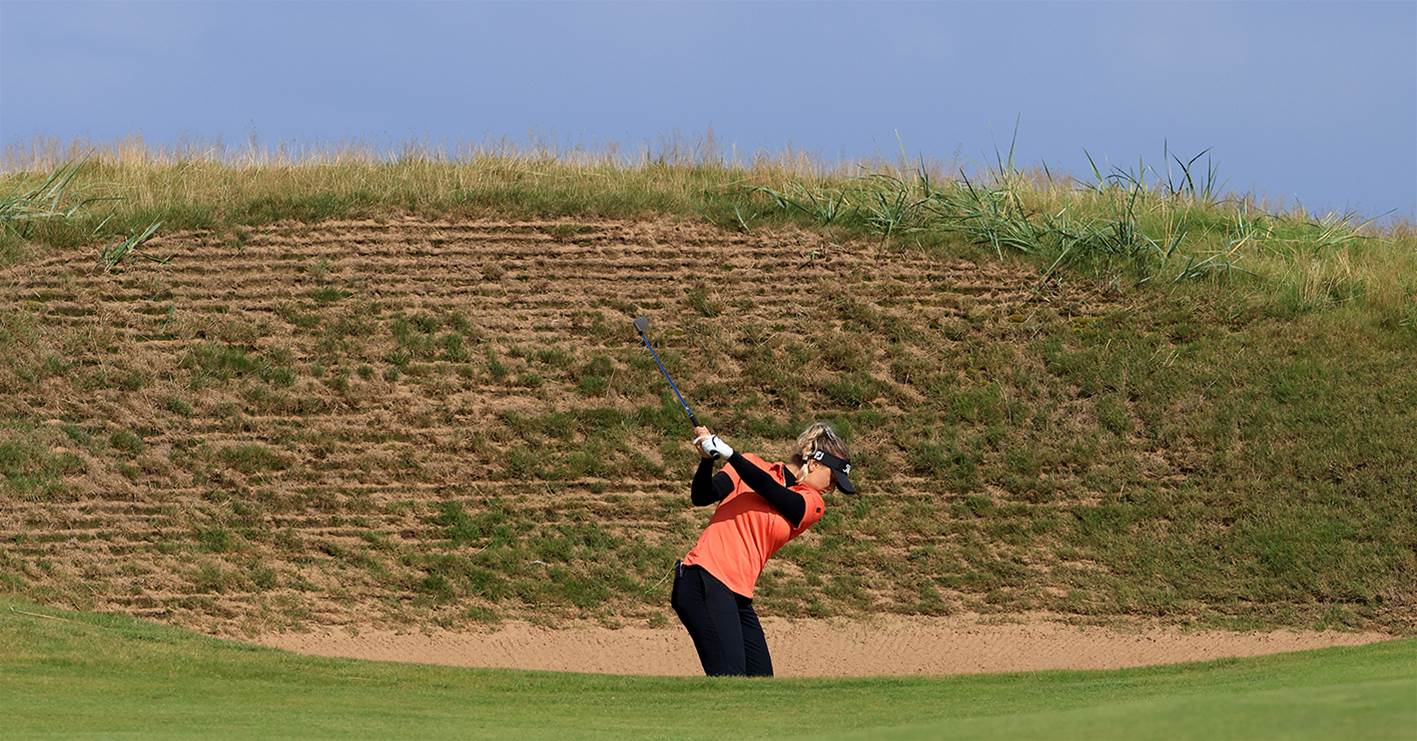 Melbourne's Su Oh had been the best-placed Aussie going into the last round but her hopes ended at the sixth with a calamitous triple-bogey eight.

Oh went on to shoot a four-over 76 for a one under finish, while compatriot Hannah Green also recorded a 76 en route to a two over score for the week.

The 21-year-old Scot Louise Duncan, undoubted star of the week, ended with a par 72 to earn a tremendous top-10 finish and take the Smyth Salver as leading amateur, while World No.1 Nelly Korda's 72 had her on the same score as Kyriacou.