Phil Mickelson has seen a week in which he had a "unique opportunity" to complete the career Grand Slam in his home city of San Diego at the age of 51 all go horribly wrong.

The US PGA champ ended the week on Sunday at Torrey Pines by somehow hitting his approach to the 18th around 70 yards beyond the hole, making a bogey six and completing a 75 to finish 11-over par, almost two hours before the final group was due to tee off.

Since claiming the Open Championship at Muirfield in 2013, Mickelson has never threatened to win the US Open or even come close to replicating one of his record six runners-up finishes, the last of which came the month before he lifted the Claret Jug.

Since the last of his six runner-up finishes at Merion that same year, he has either missed the cut or finished over par in the US Open.

Amazingly, he even opted to skip the tournament in 2017 to attend his daughter's high school graduation, something which cemented his reputation as an all-around good guy, an image shattered the following year at Shinnecock Hills following an incident during the third round.

The six-time major winner, who was already four-over par for the day on his 48th birthday, badly overhit a putt on the 13th hole which was set to roll off the parched green.

However, Mickelson prevented that from happening by running after the ball and hitting it while it was still rolling, a breach of rule 14-5 which incurs a two-shot penalty.

Such a flagrant and deliberate act was met with fierce criticism from several quarters, with former US PGA champion Steve Elkington among those calling for Mickelson to be disqualified and accusing him of "trying to embarrass the USGA".

Mickelson was unrepentant in the immediate aftermath, claiming he was using the rules to his advantage and telling his critics to "toughen up", although a few days later he sent a message to a handful of American journalists offering his apologies.

At least Mickelson gets more chances. By winning the US PGA Championship last month, the 51-year-old Mickelson is exempt from qualifying for the US Open through 2025. McIlroy surges into contention at US Open 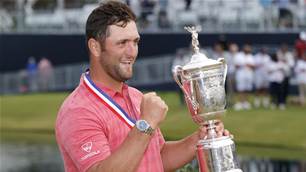