Matt Jones walked up the 18th hole thinking he had a multiple shot cushion as he sought a second Australian Open title. Upon realising he needed to get up and down for par, the New South Welshman did just that to defeat South African Louis Oosthuizen by a single shot.

Largely unchallenged at the top of the leaderboard throughout Sunday’s final round, serious pressure was put on Jones for the first time at the 72nd hole after Oosthuizen made an eagle three in the group in front. Jones believing he had at least a two shot lead after finding a tree branch from the fairway bunker at the last, his third lying just short of the green.

“I was under the assumption that it was at worst, I had a two-shot lead, so I wasn’t playing for the green on my third shot, I was happy to hit it in the bunker, which I’m happy I didn’t, because that bunker shot wouldn’t have been as comfortable, but then I realised what I had to do and the chip wasn’t that difficult,” Jones said as he sat alongside the Stonehaven Cup.

Jones offset two bogies with two birdies on the front nine, as his main challengers failed to mount a significant charge. The 39-year-old also securing an Open Championship berth in 2020, the remaining two spots at Royal St George’s going to Aaron Pike and Japanese amateur Takumi Kanaya, who shared third at nine-under. The 2015 champion at this venue admitted to being calm throughout the day as he largely avoided trouble, with the expected charge from foreign raiders Cameron Tringale and Paul Casey never eventuating.

RIGHT: Jones celebrates after the final putt drops at the 18th at The Australian Golf Club. PHOTO: Mark Metcalfe/Getty Images.

“I was very calm all week, actually,” Jones said. “I was much more nervous in 2015 when I won. I was very relaxed and calm this week, all week and today I was unbelievably calm. I put myself in a couple of awkward situations, but my short game, which I do rely on a lot, saved me and I was able to get it done.”

After back-to-back birdies at the 13th and 14th holes, Jones made his only slip-up of the back nine with a bogey at the difficult par-4 16th, rated the hardest hole for the members at The Australian. However, a birdie at the next took Jones back to 15-under moments after Oosthuizen found the par-5 last with his second shot. The 2010 Open Champion rolling in his 15 foot putt to reach 14-under and a nervous wait watching the action on television in anticipation of a playoff.

“I think coming on the back nine I just wanted to try and get some numbers up there so that he’s a little bit under pressure, but he did really well and the whole day he was three shots ahead. I had to do something and I went for it on the last and it paid off and made a nice eagle,” Oosthuizen said.

Having found the expansive fairway bunker down then left side of the final hole, Jones assessed his options before a tree he didn’t believe was in play knocked his second shot straight down onto the pine needles below. “It was, but the wind was so hard off the right that I thought that it could either go in the rough or it could hit a person, it could hit a person on the head, go in a hazard, it could hit a footpath and go left,” Jones said of his thoughts of playing down the adjacent 10th fairway. “It was a very easy shot. I was just hitting it out there to hit a 9-iron on the green and it caught a little pine cone and just dropped straight down. I actually didn’t even see the tree limb, it was not even in play. Probably like the same as the 9th hole in 2015 when I hit in the water. But it ended up all right. It would have been better if it was on grass, so I had to play a little safer when I was playing out of the pine needles, but it was alright.”

With his wife and three young children watching on alongside friends from his years as a member of The Australian, Jones chipped close to the back right pin position, then in almost a replica of his title clinching putt in 2015, found the lip of the cup with his putt that eventually found the bottom of the hole.

“I like to make it interesting,” Jones joked of his 269th stroke to close out the 104th Australian Open. “It couldn’t have been an easier putt, this one. The first one (2015) I didn’t really know the read. This one you could hit it as firm as I wanted, I could spin the right edge and it would have gone in, but I thought I’d just hit it pretty soft and just trickle in the left side.”

After appearing to struggle with a sore back during Saturday’s third round, Jones moved freely throughout his final round 69. And although confirming there would be a few celebratory drinks taken from the Stonehaven Cup, he suggested the party would be more circumspect that once in his life and perhaps see the storied trophy filled with one of the more unique beverages in history.

“Probably beer,” Jones said of the first drink of choice. “Honestly, I’m not a big drinker and I do not look forward to hangovers, especially with three kids. We’ll have a few tonight somewhere. I’ll probably start with beer. It used to be Jack and coke, but if they make a good margherita, I’d love that.”

Once the celebrations are done, Jones will take a break from competitive golf until restarting his PGA Tour season early in 2020, when he hopes his second national open win could lead to a second chance for national duties at the Tokyo Olympics.

“I passed up on it the last Olympics,” Jones said. “I was trying to keep my US Tour card and that was probably the biggest regret I have in golf, is not going to play. In hindsight, thinking about it more, I’d love to be able to go and play the Olympics.” 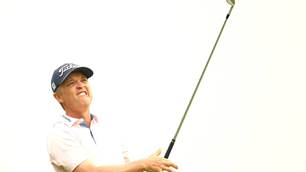 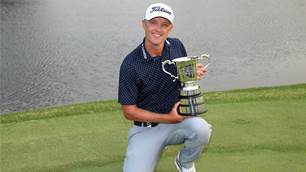 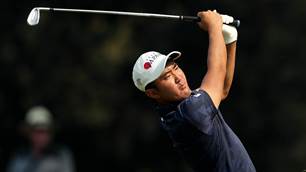