Hideki Matsuyama cut a solitary figure as he walked alone to the clubhouse to sign his card after winning the Masters, even if all of Japan was with him in spirit.

After exchanging hugs beside the 18th green with his small entourage, a stoic Matsuyama was left to himself to sign his scorecard and prepare for a new life that will never be the same after becoming the first Masters champion from Asia.

Even before the winning putt dropped the notion was already being raised, by three-time Masters champion Nick Faldo, that Matsuyama could be chosen to light the cauldron at the Olympics opening ceremony in the Japan National Stadium on July 23.

Matsuyama is finalising his plans but is likely to be in the country at that time as a member of Japan's golf team six days before the Olympic men's competition starts on July 29.

"If the schedule works out and I am in Japan when that happens and they ask me, what an honour that would be," Matsuyama said via his interpreter, before adding with typical Japanese humility his thoughts about the Olympic golf.

"If I am on the team, and maybe it looks like I will be, I'll do my best to represent my country, and hopefully I'll play well," he said.

But if Matsuyama has played his way into the hearts of Japanese golf fans by becoming the first man from his nation to win a major championship, he is unlikely to offer up much celebrity fodder.

A very private person, to an extent that he makes Tiger Woods looks like an open book, Matsuyama rarely speaks of his family. The Japanese media, who follow his every step, did not even know for seven months that he had married back in 2017.

"If the schedule works out and I am in Japan when that happens and they ask me, what an honour that would be." – Hideki Matsuyama

It was not until Matsuyama announced that wife Mae had given birth to a girl that they found out about his nuptials.

The 29-year-old prefers to let his clubs do the talking and even in the glow of victory was reluctant to acknowledge that he was the greatest player from his country.

The pressure of sleeping on a four-shot lead caused Matsuyama to wake up much earlier than he had hoped on Sunday, and after some first-tee nerves he remained inscrutable until the very end.

"I felt really good until I stood on the first tee, and then it hit me that I'm in the last group of the Masters tournament and I'm the leader by four strokes," he said.

"And then I was really nervous but I caught myself, and the plan today was just go out and do my best for 18 holes."

It was not until he smoked a drive up the middle at the last that the job was almost done, having the luxury of being able to make a bogey and still triumph.

"It's all over," said one spectator, the near silence broken only by a bird tweeting nearby.

So what had Matsuyama been thinking upon holing the winning putt?

"When the final putt went in, I really wasn't thinking of anything," he said.

"But then hugging Xander (playing competitor Schauffele) – then when I saw my caddie Shota (Hayafuji) and hugged him, I was happy for him because this is his first victory on the bag.

"And then it started sinking in, the joy of being a Masters champion." 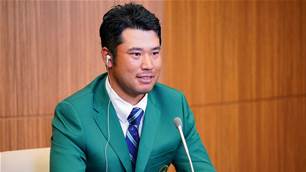 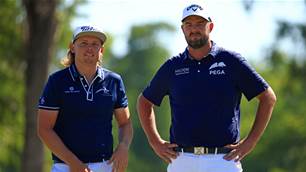