England’s Meghan MacLaren has staged a triumphant return to the Coffs Region with a thrilling one-shot win in a gripping final round of The Australian Women’s Classic at the Bonville Golf Resort.

On a Sunday when the weather gods played kindly after two days of rain, It wasn’t an easy ride for the overnight leader, however, as she stumbled over her opening holes.

Bogeys at the 4th and 6th saw her lead quickly evaporate, and with several players making their move, the tournament was ripe for the picking.

Sweden’s Maja Stark was the first, and she wasted no time stamping her authority on the event with a birdie on the 1st.

Three more birdies followed on the front nine, at the 5th, 7th and 9th, and as the leading groups turned for home, Stark had got it to eight-under, and the lead was hers alone. 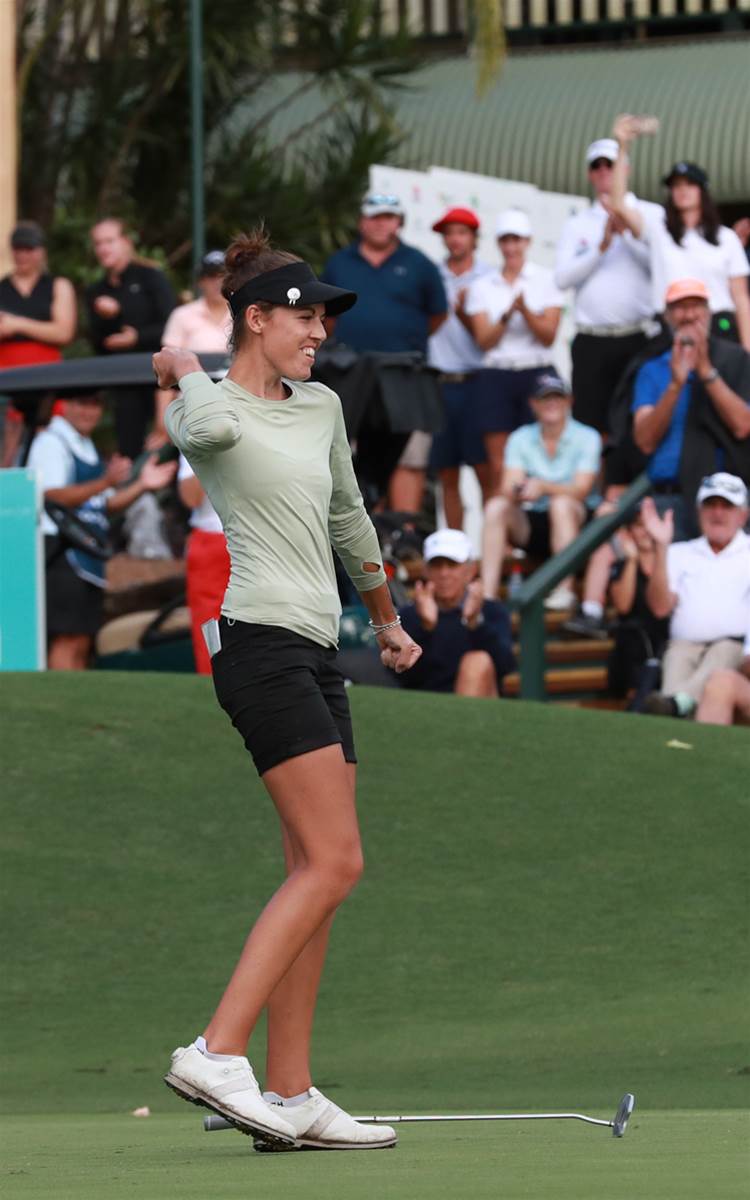 Sadly for the Swede, her run came to a grinding halt with a cruel double bogey on the 13th. After being forced to chip out from the trees, she couldn’t save par, relinquishing the lead. Back-to-back birdies on the next kept her in the hunt until the end, but when MacLaren grabbed a vital birdie on the 15th, the task was suddenly far more daunting.

MacLaren knew she was ready to taste success with the clutch birdie, and from there it was an exercise in composure for the new champion.

“I knew someone had got to eight-under and I was on seven at that point. I made a good birdie on 14 and 15 and I assumed the lead might be nine at that point,” MacLaren said.

Playing alongside Stark, Queensland Amateur Sarah Hammett also went quietly about her business. Unphased by the occasion, the shy 15-year-old birdied the 4th, 6th, and 7th to get to seven-under and put herself right in the mix. Her chances evaporated, sadly over the closing holes, and with the pressure mounting, the teenager rifled one into the trees on the last, ruining any chance she had to force a playoff.

Another Queenslander teenager, Justice Bosio, also had her chances late. Playing three groups in front, the 18-year-old amateur sizzled around the front nine in just 32 strokes and was within touching distance of the lead for much of the back nine. Sadly, a couple of ill-timed bogeys on the uphill par four 13th and gettable 15th cruelled her chances.

Several other players also put their hands up through the round, including Forster-Tuncurry hope Sarah Kemp, and England’s Hannah Burke.

Kemp, who battled the worst of the conditions during the rain-interrupted second round, started the day just a few too many back at the end. Her four-under-par 68 final round left her at five-under par for the rain-shortened 54 hole tournament.

Despite a withering final round which included an eagle, six birdies and just one bogey, Burke – like Kemp – turned out to be just that touch too far back, and despite carding a seven-under 65, she too eventually fell short, three shots behind the winner, MacLaren. 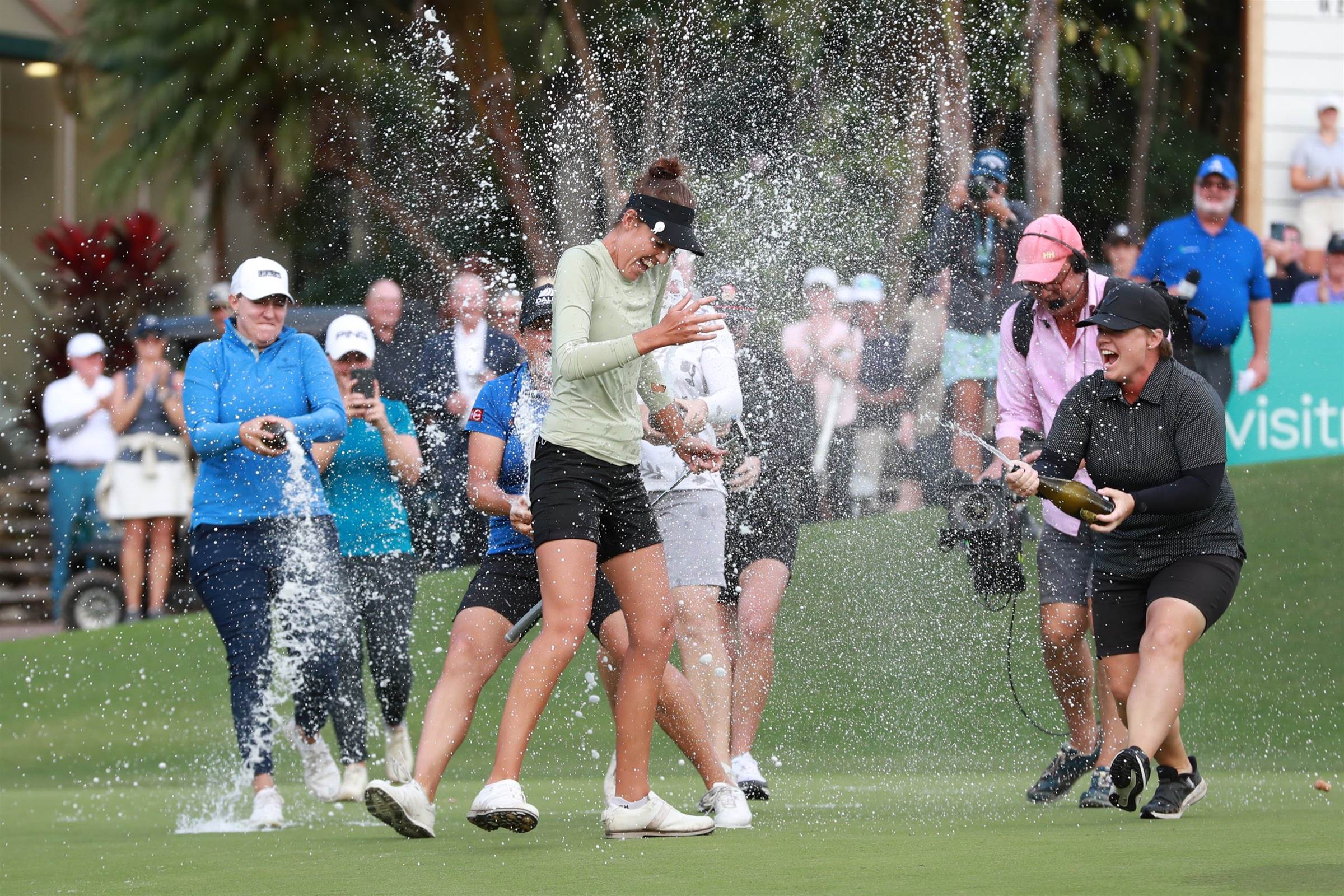 The Englishwoman is drenched in celebration after winning again in Australia and the Coffs Harbour region. PHOTO: Golf NSW.

“When I realised it wasn’t, I knew was leader by one and I just assumed they would make birdie on 18, so I needed to do that was well. That was a long wait on 18,” the champion said post round. “I knew what I was going on and I knew what I needed to do.”

MacLaren, however, is the woman of the moment. Now a three-time LET winner on Australian Soil, after her back-to-back wins in the 2018 and 2019 NSW Opens, last week’s victory justifies her decision to return to her European playing roots after a couple of years of attempting to break onto the LPGA Tour.

“I felt if I played the golf I knew I was capable of [today] I knew I could win, but I tried not to get too far ahead of myself.”

MacLaren has said all week Australia in general and the NSW Coffs Coast in particular holds a very special place in her heart, adding it contributed to the relaxed state of mind she had been in all week.

“I felt calm all week and pretty chilled out,” she grinned.

Reflective MacLaren back in her happy place at Bonville