Oscar Lengden leads the way at the end of round one of the inaugural Shot Clock Masters, after a swift day of action at Diamond Country Club near Vienna, Austria.

The European Tour was once again breaking new ground, with every player in the field on the clock for every shot as part of the Tour's bid to combat slow play.

The Swede signed for a six-under-par round of 66 to top the leaderboard on a day in which the fastest round came in at 55 minutes under the average time across the European Tour in 2018 for 18 holes in three balls.

“On my first hole (the 10th) I actually took a lot of time, I think I had four seconds left or something, but I think this kind of system fits me well,” Lengden said.

‘I’m a quick player, I like playing quick; I dislike waiting. For me it feels great out there.”

The group of Nico Geyger, Henric Sturehed and Kristian Krogh Johannessen posted a round time of three hours and 53 minutes, compared with the 2018 season average of four hours and 48 minutes.

Five groups completed their rounds in under four hours, as the average for the day came in at four hours and 13 minutes, with no penalties imposed for bad times. Jiménez and his caddie in discussion during day one of the 2018 Shot Clock Masters at Diamond Country Club. PHOTO: Matthew Lewis/Getty Images.

The 21-time European Tour winner Miguel Ángel Jiménez of Spain was one of those players who got around Diamond Country Club in less than four hours, on the way to a round of 67.

“After nine holes we were under two hours, and then of course under four hours after 18 and that was even waiting to play on some holes,” Jiménez said.

“It would be nice to have some more time to talk a few more words to your caddie, but it’s nice, it’s definitely a positive experience.”

Jiménez was joined at five under par and just one shot off the lead by Sweden’s Peter Hanson and Tapio Pulkkanen of Finland, who shot back-to-back eagles on the 15th and 16th holes.

Young Scottish duo Bradley Neil and Conor Syme are part of a group of six players one shot further back at four under par.

Nick Cullen and Adam Bland are the best-placed Australians, tied for 24th, after signing rounds of two-under-par 70. 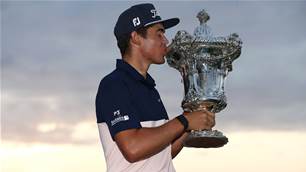