Marc Leishman arrived at Augusta National in the midst of a post-COVID-19 slump but left super keen to return in April and buoyed by a performance that showed his troubles could finally be behind him.

The 37-year-old recorded the equal best score of the final round, a four-under-par 68, to finish in 13th place at eight under in the postponed Masters.

It might not sound impressive but, given where he'd come from, not having an over-par round was a welcome change.

Not since his win at the Farmers Insurance Open in January had Leishman got through four rounds without being over par and his best finish since the sport returned in June had been a 29th – in in a 30-man field.

He hopes to take the form forward.

"It's nice to get a bit of a result up on the board," Leishman told AAP.

"I was hitting the ball as good as I ever have for most of the week but just couldn't get the putts to drop.

"It's nice to get a bit of a result up on the board. I was hitting the ball as good as I ever have for most of the week but just couldn't get the putts to drop." – Marc Leishman

"So, as good as it feels to show I'm making progress, there is still a level of frustration with throwing a few shots away this week."

Leishman was indeed rocks or diamonds.

He will collect plenty of the latter from the Augusta National Club, who traditionally present players with crystal for making eagles – and Leishman led the field with three of those during the 2020 Masters.

Unfortunately, he also had two double-bogeys during the week.

Only three players in the field hit more greens in regulation than Leishman, but he also ranked near-last in putting.

"I didn't putt quite the way I wanted to earlier in the week. I couldn't adjust to the way they were breaking," he said, explaining the softness and lack of pace usually custom at the Masters when it's held in its traditional April timeslot.

"But I'm excited about coming back in April. I know the course is going to be perfect again.

"Hopefully, it can be firm and really play difficult and show what this place can do to you if you're a little bit off. 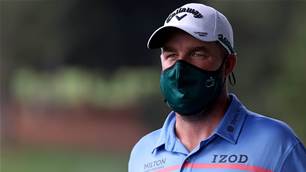 Fan-free Masters a challenge for Leishman