Deyen Lawson has scored an emphatic win at the $50,000 Queanbeyan Open, running away with the title by four shots

In second place was the fast-finishing Daniel Gale, at 11 under, while Grace Kim, playing a modified course, finished in third at 10 under.

Lawson was thrilled with his winning performance, which came at the end of a rather long day. A two-hour weather delay meant the leading group didn't hit the course until just after 3pm.

Lawson, who began the day with a two-shot lead, admitted he got off to a bit of a slow start, but as he neared the turn for home, his game picked up a gear.

"I didn't get want I wanted out of the round early, but on the 8th, I made a good birdie. I hit it to about 10 feet and rolled it in.

"I got some momentum then."

And the momentum it was. More birdies followed for Lawson as he rolled through the back nine, and by the 16th, he was three in front.

"I hit a good wedge to a foot on 11. I looked again after the 14th, and Daniel Gale had finished well, and 11 under was the total.

"On 16 I wanted to keep pushing, because the scores the guys have been shooting in the last month or so, well, you know anyone can come out and have a low one."

And push Lawson did. A solid 3-wood set up an eagle on 16, and from there, with a big lead, the title was all but his.

"I was happy in the end to play solid coming home."

Happy too was the walk up the last with a four-shot lead knowing he had secured the title.

"It is a comfortable feeling walking up the last with that lead. It doesn't happen very often, but when you do, it's easy.

"It's not done until it's done, and I wanted to make birdie on the last. I hit two good shots and gave it a good roll.

Rick rules the roost in Moruya 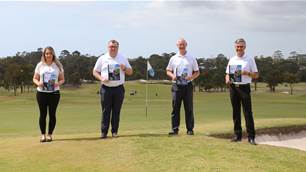