Kyriacou, in her final event as a teenager before she turns 20 at the weekend, bowed out in her remarkable rookie year as a pro by firing two eagles and five birdies en route to her nine-under-par final round on Thursday at the Royal Greens Golf & Country Club.

Chipping in from the rough for an eagle at the last, having already holed from the middle of the fairway for her other eagle at the 14th, Kyriacou shot up the leaderboard to finish just two shots behind Pedersen in the three-round event.

She finished alongside Dutchwoman Anne Van Dam and Spain's Luna Sobron Galmes as joint runner-up on a 12-under-par total with only Pedersen's excellence as the top player on Tour enabling the Dane to win her second LET title on the course in the space of a week.

Kyriacou's blistering finish, which saw him earn her fifth top-10 placing in the Tour's last six events, made it even more likely that she will now seal the title of LET's Rookie of the Year.

She has a lead that can only be beaten if English newcomer Alice Hewson wins the season's final event in Marbella next week.

"It was a good day on the golf course." – Steph Kyriacou

The teen from Sydney also finished runner-up in the team event, losing by just one shot to the team captained by Pedersen, who has sealed her place as the winner of the Road to Costa Del Sol, the Tour's order of merit.

Kyriacou will miss the season's finale because she couldn't afford to miss out on the chance of returning home this weekend after three and a half months away.

She has already had two previous flights cancelled when she tried to get back to Australia and will now take the long haul home to Sydney via Dubai, Malaysia and New Zealand at the weekend.

"It was a good day on the golf course," smiled Kyriacou, who has come a long way since beginning the year as an amateur, earning a sensational win at the Australian Ladies Classic Bonville and then turning pro the next day.

"It's been a roller-coast year, and a big learning curve, but I've had a good year, really happy with how I've gone, so I'm stoked. I'm going to set some higher goals next season," added Kyriacou.

"I can't wait to get back, I just miss being at home," she said. 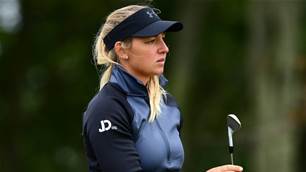 Pedersen in line for Saudi sweep