For one, it was a display for the ages, for the other, a win as unlikely as it was epic.

Grace Kim from Avondale has done what most expected, and made it back-to-back women’s NSW Amateur Championships, becoming the first repeat champion since Sarah Oh in 2005/2006.

For Andrew Richards, the win is the biggest of his career and one he least expected.

“I was just happy to make the match play this week,” Richards confided after his semi-final win against Thomas Heaton.

The finals were different affairs, but with one constant; the rain and wind didn’t let up all day.

In the women’s final, Kim was out of the blocks early, immediately vaulting to a three-hole lead. By the 7th it was five, and by the 12th it was six. Belinda Ji managed a birdie on the 18th to bring it back to five, but realistically, by then the battle was probably lost.

Kim stepped on the gas to begin the second 18, getting to seven up before Ji grabbed a much needed hole on the 21st. The pair then swapped a few holes, however, when Kim took the 27th and 28th to get back to seven up, the match was as good as over. Two holes later Kim was champion, 7-6.

Kim described her play as some of her best in recent times, particularly in the conditions.

“I mean the past two days have been quite brutal. It took some getting used to,” Kim said.

“Through this time; it was tough not doing anything ... To claim this title again feels huge for me." – Grace Kim

Due to COVID, the NSW Amateur has effectively been Grace’s only hit out in almost 12 months, something which has frustrated the talented star.

“You know through this time; it was tough not doing anything. Preparation for what? Nothing, so to claim this title again feels huge for me."

With borders now opening across the country, Kim is looking forward to now competing at the Australian Amateur. After that, she will be making the trek to the United States to compete at the Augusta Women’s Invitational, an opportunity taken from her last year due to the pandemic.

“I’ve got to get a move on with that, figure it all out,” she smiled.

For the hardy souls who braved the conditions at Magenta, the men’s final was a classic. Despite the rain, the golf on display was sublime.

Like Kim, Richards was first to make a move, getting out to an early lead. By the 11th he had marched it out to four holes and looked like a man in complete control.

However, Jeffrey Guan bounced back. Before the opening round ended, he had clawed his way back to just a one-hole deficit.

The pair traded the lead a couple of times as the second 18 began, before Richards went on a run, winning five holes in the next eight to grab a four-hole lead.

The pair traded holes on the 31st and 32nd before Richards made par on the 33rd hole to claim the biggest win of his golf career with a 4-3 victory.

"I was quietly confident. I’ve been playing well, and match play is a huge strength of mine. I played great the first 14 holes; I was three-under in this rain. I knew when I got the lead back (the second time) I couldn’t lose it again,” Richards said after the win.

"I knew when I got the lead back (the second time) I couldn’t lose it again." – Andrew Richards

Richard admitted reading his quote about simply being happy to make the match play spurred him on in today’s final.

“When I saw yesterday’s quote, I was almost motivated by it; I wasn’t just happy to be there. I’m going to go out and win.

”I knew I had the experience to win.

The win is a massive boost for Richards, who intends to turn his attention to the professional ranks shortly.

“I plan to turn pro this year,” he said. “Obviously I’m now in the NSW Open, so I do need to think about it.”

Richards said the plans for his victory celebration were already well underway.

“We are going back to ‘Penno' with everyone here, and there’s a lot of people already there, so it’s going to be a big night,” Richards grinned. 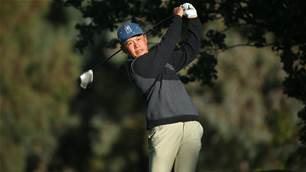 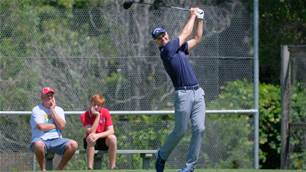 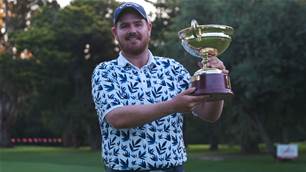 Lawson laps the field at Queanbeyan