Australian veteran Matt Jones has enjoyed a "spectacular" day at The Honda Classic, recording the lowest round of his professional career while tying the course record at PGA National with a brilliant opening nine-under-par 61.

The 40-year-old from Sydney was just about flawless on the Palm Beach Gardens course in Florida, recording nine birdies and no bogeys in Thursday's first round despite testing breezy conditions.

Jones just played it all cool as he shrugged: "I play golf for a living – I mean, I should be able to shoot a good golf score occasionally!"

His opponents, though, were left in awe.

"That's an incredible round of golf," said in-form Lee Westwood, who opened with an even-par 70.

"Could be the round of the year, 61 around here, when it's flat calm, impressive.

"But when there's a 15-, 20-mile-an-hour wind blowing, greens are fast, a lot of crosswinds, that's an incredible round of golf."

Jones put together four straight birdies on holes 2 through 5 to take early control before making two more after the turn on the 11th and 13th.

The two-time Australian Open winner then produced a spectacular three-birdie finish, making a six-footer at the par-4 16th, rolling in another 25-footer at the par-3 17th and sinking a five-footer for the course record-tying birdie at the par-5 last.

It gave Jones, whose only other PGA Tour win in his 20-year career came seven years ago, a three-shot lead over Americans Aaron Wise and Russell Henley.

Asked if it had been a pretty spectacular day, Jones smiled: "It was. It was a very good day. I struck the ball well, actually all day, and it was probably one of the better ball-striking days with my irons that I've had for a long, long time."

"It was a very good day. I struck the ball well, actually all day, and it was probably one of the better ball-striking days with my irons that I've had for a long, long time." – Matt Jones

It was an even more remarkable effort from the World No.83 as Jones produced his best-ever round in a PGA Tour tournament in awkward conditions – and he reckoned that being a bit slower and more deliberate in his approach had definitely helped.

"I'm normally a bit more amped-up and hyped-up and I had a different goal this week – be a little more calm than normally and walk slower," Jones said.

"It was windy out there. The wind came up on our fifth hole maybe. I'm naturally an aggressive player. When the wind comes out, my course management comes in and, yes, growing up in Australia playing in the wind can help, too.

"I actually didn't know I made four (birdies) in a row until I saw it on the scoreboard on 18. I didn't even think about it. You can't think about that on this golf course because every hole can bite you."

Jones matched the 61 that Brian Harman fired in the second round of the 2012 Honda, the same year Tiger Woods shot a 62 in the final round.

Jones's only other PGA Tour victory came with a chip-in to win a playoff at the 2014 Houston Open but his best-ever finish in The Honda was equal-fourth in his rookie year – a fact he recalled as he was going round on Thursday.

"Someone sent me a screenshot of that leaderboard yesterday, so it was good to see that," he smiled.

Asked how many course records he now owned or shared, Jones smiled: "I wouldn't know. It's like asking me if I have a hole-in-one. I couldn't tell you how many I've had. I haven't kept track.

Fellow Australian Cameron Davis also had a great day out, a four-under 66 leaving the 2017 Australian Open champion in a tie for fourth.

Adam Scott and Cameron Percy both shot 69s, with Lucas Herbert also one under through 12 holes of his opening round. 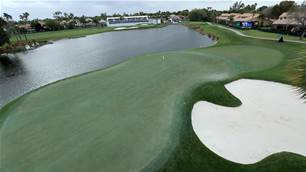 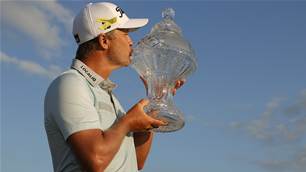