Eun-Hee Ji of South Korea has left the mistakes to everyone else down the stretch to claim victory in the LPGA Tour season opener.

Ji managed a strong wind and the cold on Sunday by making three birdies on the back nine to pull away and close with a one-under 70 to take a two-shot win in the Tournament of Champions.

The 32-year-old got her mistakes out of the way early, opening with two bogeys to fall behind fellow third-round co-leader Lydia Ko.

Ji took the lead for good with a birdie on the 10th hole at Tranquilo Golf Club at Four Seasons and she stayed in front the rest of the way.

Ko was one shot behind when she pulled her tee shot on the par-5 13th and never found it, and then compounded the error with a three-putt for a double bogey.

The former World No.1 made double bogey on the closing hole for a 42 on the back nine and a 77 to finish eighth. "I just enjoyed my game with my celebrity partners," Ji said. "It makes it more fun and I relaxed more. So I didn't get nervous."

The LPGA opener was limited to winners over the last two seasons. It also included a celebrity field of athletes and entertainers who competed for a purse using the modified Stableford scoring system.

Stacy Lewis, in her first competition as a mother, shot 70 and tied for sixth.

Ariya Jutanugarn, the No.1 player in women's golf who captured every major award last year, closed a 75 to tie for 18th.

Katherine Kirk, Australia's lone representative in the 26-strong field, had her best round of the week on Sunday with a 70 lifting her to joint 22nd at two over.

The LPGA will resume in Australia on February 7 for the Vic Open at 13th Beach Golf Links on the Bellarine Peninsula. 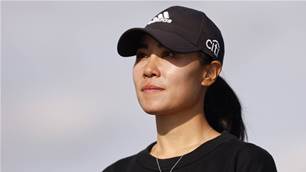