Patience will be paramount as Minjee Lee and Hannah Green spearhead an impressive nine-strong Australian contingent at the first women's golf major of 2020 starting on Thursday.

High winds and potential thunderstorms are forecast for the duration of the Women’s British Open at Royal Troon in Scotland, where Green will be hunting a second career major to follow up her stunning 2019 US PGA Championship win in Minnesota.

Green capped her breakout season with a second LPGA Tour victory last September but only emerged from four months of COVID-19 hibernation at home in Perth for last week's Scottish Open.

The 23-year-old is bracing herself for another challenging week as the world's biggest names chase elusive major silverware at the same venue where Henrik Stenson famously out-duelled Phil Mickelson at the men's Open championship in 2016.

"It's going to be very tough in the wind. I've just got to be really patient and enjoy myself while I'm out there," Green said.

“It's going to be very tough in the wind. I've just got to be really patient and enjoy myself while I'm out there.” – Hannah Green

"Hopefully I can get off to a good start because it is going to be tough.

"I'm hoping I can have some good consistent rounds and just keep in it."

While the 20th-ranked Green and World No.8 Lee represent Australia's best chances in Scotland, seven others also hope to contend on Sunday.

Gabriella Ruffels is fresh of a second consecutive appearance in the US Amateur Championship final, while fellow young gun Steph Kyriacou will be making her eagerly-awaited major debut after announcing her arrival on the international stage in spectacular fashion in February.

The teenager blew away the field to win the European Tour event by eight shots at Bonville, near Coffs Harbour.

In a golf calendar that has been heavily reshaped because of the coronavirus pandemic, the Women’s British Open has managed to hold its date and will be the first of four women's majors this year.

The Evian Championship has been cancelled and will return in 2021.

There will be COVID-19 testing for players and caddies but no spectators at Royal Troon.

AUSSIE TEE TIMES FOR FIRST ROUND OF BRITISH OPEN ON THURSDAY (AEST): 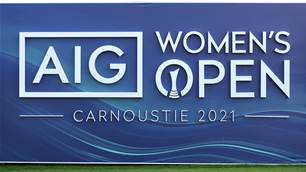