Australia’s latest major golf champion and two more of the world’s most exciting young players have committed to play the 2020 ISPS HANDA Women’s Australian Open at Royal Adelaide in February.

Perth’s Hannah Green, defending champion Nelly Korda of the United States and Australia’s top-ranked female golfer, Minjee Lee, will all tee it up at one of Australia’s best courses from February 13-16, joining a cluster of the world’s best players in the South Australian capital.

Green is making a triumphant return to Australia from a wonderful 2019 campaign overseas, aiming to fulfil her dream of winning her own national golf Open.

The 22-year-old who hails from Perth’s Mt Lawley club stunned the golfing world in June this year when she led from start to finish at the KPMG LPGA Championship, one of the five women’s majors, at Hazeltine in Minnesota.

Her one-shot victory was the first major by an Australian woman since the great Karrie Webb’s 2006 win at the Kraft Nabisco Championship, and she became only the third Australian female ever to win a major – behind Webb and Jan Stephenson.

Green, who graduated from Golf Western Australia’s elite amateur programs and Golf Australia’s Karrie Webb Scholarship, climbed into the top 20 on the world rankings with her remarkable victory.

She promptly won another LPGA Tour tournament, the Cambia Portland Classic, in August, to emphasise the fact that with more than AU$1 million in prizemoney this year, just her second season on the biggest tour in the world, she is a potential superstar of the sport.

“It’s always been a dream of mine to win my home Open,’’ said Green, who is ranked No.18 in the world.

“That’s why I’m so happy to be coming back to Royal Adelaide in 2020. We’re lucky to play at such a great track with a really strong field and with the chance of winning a national title.”

Green has come close to winning the Open before. In four previous starts beginning as a teenaged amateur in 2016, she has finished tied-20th, tied-seventh, third at Kooyonga in 2018 and tied-10th at The Grange this year.

“Winning a major has changed my life a bit, but I’m very hungry to keep competing and winning and to get the best out of myself, and I don’t need any extra motivation at an event like a home Open.” 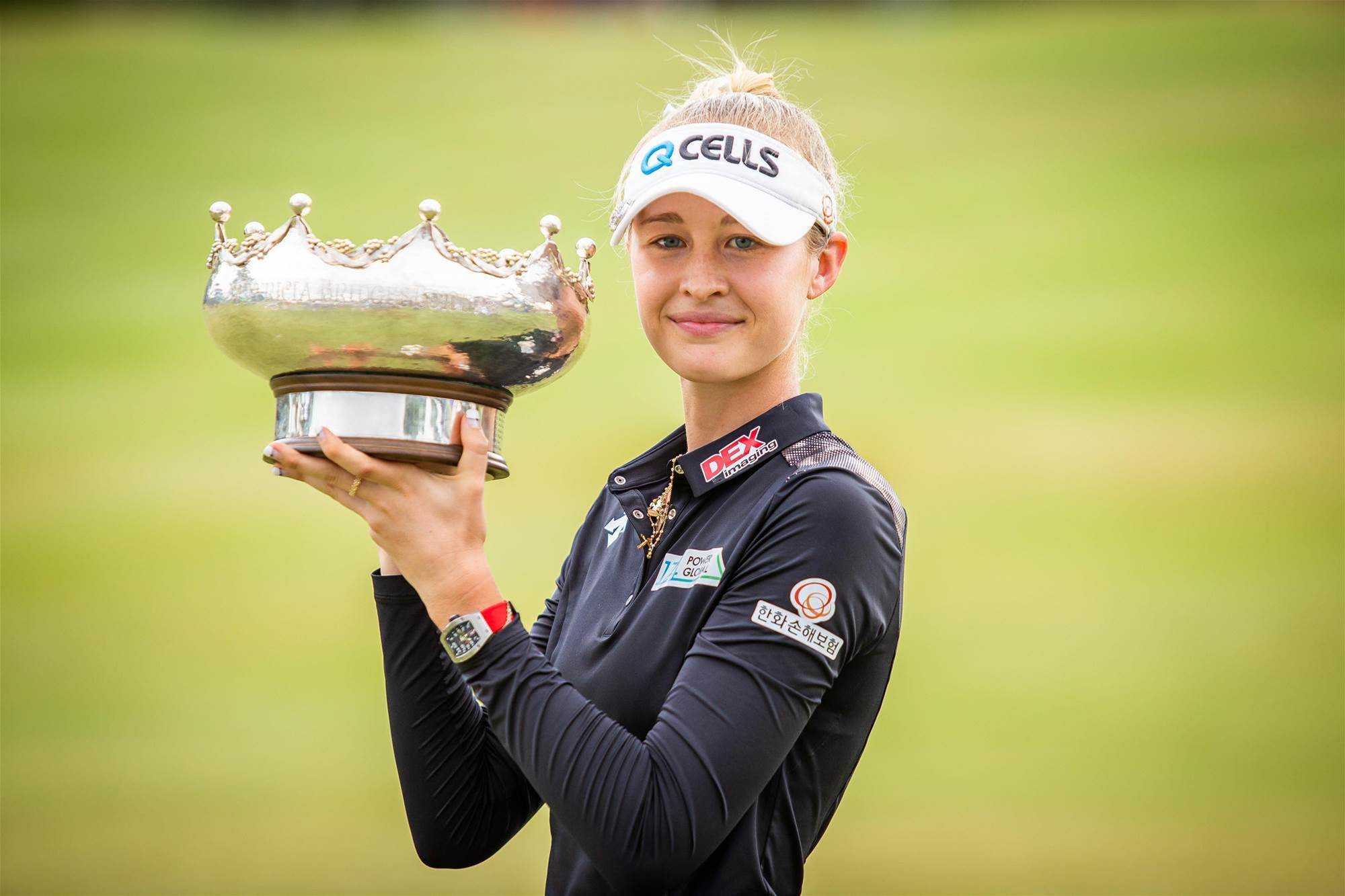 Nelly Korda will return to Adelaide and the Women’s Australian Open in 2020. PHOTO: Supplied/Golf Australia.

Korda, 21, repeated the feat of her elder sister Jessica by winning the Open at The Grange in February this year, and has continued to climb the world rankings to No.8. Meanwhile ISPS HANDA ambassador Lee, 23, is ranked No.7, having scaled the heights to a No.2 ranking when she won in Los Angeles early in 2019, so close to becoming the first Australian woman to reach No.1.

Lee, who like Green came through the elite programs of Golf Western Australia and the Karrie Webb Scholarship Squad, has won five times on the LPGA Tour but is yet to triumph in an ISPS HANDA Women’s Australian Open, and similarly carries a deep desire to secure the Daphne Akhurst Trophy.

ISPS HANDA Executive Director of International Affairs, Midori Miyazaki, said “ISPS HANDA is delighted at the news of Hannah Green’s return to Adelaide along with our own ambassador, Minjee Lee and defending Champion, Nelly Korda. We believe that sport has the power to inspire and Hannah has been a great example of this with her major championship victory this year. Players like Hannah, Minjee and Nelly are inspiring a tremendous growth in the women’s game, and ISPS HANDA is proud to have played a part in that expansion through the long term partnership with the Women’s Australian Open.”

Golf Australia chief executive Stephen Pitt said Green’s major triumph was the biggest highlight of 2019 from an Australian golf perspective. “Of course, we’ve all known for some time that Hannah was a special person and a fine player,” he said.

“But to do what she did those four days at Hazeltine this year was quite incredible. We always love having her in Australia to play the Women’s Australian Open, and we’ll be delighted to welcome her back at Royal Adelaide with the introduction on the tee of ‘our own major champion’.’’

The South Australian Minister for Trade, Tourism and Investment, David Ridgway, said the ISPS HANDA Women's Australian Open was producing world class fields and breathtaking golf as well as complementing the growing list of big sports events in the state over summer.

“To have Hannah Green back home for the first time as a major champion is going to be something very special both for Hannah and for the fans at Royal Adelaide in February,” Minister Ridgway said.

“Then to see the brilliant Minjee Lee also trying to win her home Open and Nelly Korda back in Adelaide where she was so spectacular this year, only indicates the quality of field that is assembled year after year.’’

Tickets are officially on sale through Ticketek and remain some of the best value in sport at $25 ($19 concession) each day, or $75 ($57 concession) for a four-day season pass when pre-booked. Children under 16 are free.