Wilson Furr was so focused on hitting quality golf shots that he didn’t realise just how well he was playing on Tuesday in the 120th US Amateur Championship. By the time he signed his scorecard at stroke-play co-host Bandon Trails, the 22-year-old from Jackson, Miss., had produced a round for the ages.

Furr, a rising senior at the University of Alabama, carded a nine-under-par 62 in breezy conditions to earn medallist honours by two strokes over James Piot.

The 62 matched the second-lowest 18-hole score in US Amateur history – Jeff Wilson also shot 62 in 2011 at The Home Course in Dupont, Wash. It also eclipsed by two shots the Bandon Trails competitive course mark that had been set 24 hours earlier by Aman Gupta, and matched earlier on Tuesday by Charles “Ollie” Osborne.

Billy Horschel owns the US Amateur and USGA 18-hole scoring record of 60, which he produced in Round 1 of the 2006 championship at the Chaska (Minn.) Town Course.

Furr registered 11 birdies against a pair of bogeys to give him a 36-hole total of 11-under 132. That was one stroke off the 36-hole championship record established by Hayden Wood in 2017 at The Riviera Country Club in Pacific Palisades, Calif., tying Furr with three others, including fellow University of Alabama golfer Bobby Wyatt (2012).

“I mean, until you told me all that, it didn’t really hit me, to be honest with you,” said Furr, who is competing in his eighth USGA championship and fourth US Amateur. “We were just trying to run our game plan all day, and I just started hitting it close and a couple putts went in, and then kind of looked up and we were seven under through 12. Like I said, it happened real fast, so I don’t know what to say really.”

For the second consecutive day, competitors were greeted with bright sunshine and mild winds (seven-14 miles an hour) that gradually increased into the low- to mid-20s. Furr, who qualified for match play for the first time in his four attempts in the US Amateur, registered four consecutive birdies from No.7. All of the putts were inside 10 feet, and on the par-4 10th, he knocked his wedge approach from 148 yards to a foot. After a par on 11, Furr collected three more birdies in a row. After a disappointing bogey on the par-3 17th when his ball plugged in a bunker, Furr rebounded with a 14-foot birdie on the closing hole.

At that point, it appeared Furr might run away from the field. But Piot, 21, of Canton, Mich., a rising senior at Michigan State, closed the gap with a seven-under 65 at Bandon Dunes that included a pair of eagles on Nos. 9 and 13, and consecutive birdies on 17 and 18. It was the best round of the day on the layout that will host all of the matches beginning on Wednesday.

“At the beginning of the week I was sending off texts to all my buddies at home, saying, ‘You know what, [the] cut is going to be six, seven over,’” said Piot, who is playing in his first US Amateur. “With this wind and how it was looking [during] practice rounds, [I told myself] I’m going to try to score the best I can this week, and I got a fortunate draw with the weather situation. Today was kind of dead out there on the Dunes course, which I was really surprised about, because like I said, the practice round was nasty. I just took full advantage of it.”

Ben Shipp, of North Carolina State, finished birdie-eagle at Bandon Dunes for a five-under 67 and earned the No.3 seed at eight-under 135. Baylor University redshirt junior Travis McInroe, of Plano, Texas, followed a first-round 65 at Bandon Dunes with an even-par 71 at Bandon Trails to finish at 136, four strokes behind Furr.

First-round co-leaders McClure Meissner, 21, of San Antonio, Texas, and Aman Gupta, 21, of Concord, N.C., were unable to match their Monday brilliance, when they posted 64s. However, both had little difficulty qualifying for match play. Meissner, who won last month’s Southern Amateur in a playoff, shot a three-over 75 at Bandon Trails for a total of five-under 138. Gupta, a last-minute addition when World No. 2 Ricky Castillo withdrew on Friday, posted a one-over 73 at Bandon Dunes to finish at 137, along with 17-year-old David Ford, of Peachtree Corners, Ga.

Queenslander Jack Trent, who shot two-over 73 at Bandon Trails for a total of 142, was the only Australian to qualify for match play.

Scottish-born, Perth-based Connor McKinney carded four birdies on his opening nine but made three bogeys in his final five holes, missing the cut by one shot. 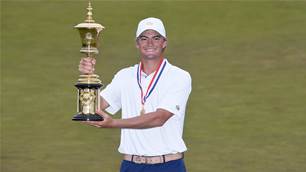 Strafaci adds to family legacy with US Amateur Victory