Four Australians remain in the hunt for The Amateur Championship after the first two rounds of the matchplay at Royal St George’s in England.

West Australian Min Woo Lee, Victorian Zach Murray and NSW pair Harrison Endycott and Dylan Perry all won through to the third round, which is one of the best performances by an Australian contingent in the event that dates back to 1885.

Endycott had a hard fought 1-up victory over Lars Keunen, from The Netherlands, while Perry was superb in defeating German Michael Hirmer 4 & 3.

The Australian assault on the title was halved after round two losses to Travis Smyth (19th hole), Blake Windred (5 & 4) and Ben Ferguson (3 & 2). Earlier in the day, Windred won his preliminary round match 3 & 2 to advance into the round of 64, but David Micheluzzi was defeated 1-down.

The third and fourth rounds will be played later today, with all four Aussies in different brackets of the draw. 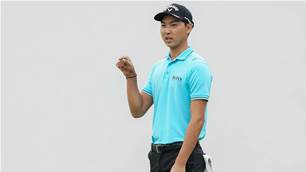